Seeing Myself on Screen through Different People changed my Life.

Let’s get this out of the way—I’m white.

Possibly Egg Shell or Polar Bear, with a healthy tan maybe even Winter’s Mood. If someone were to look at me like a color swatch, they would scratch their head and demand, “But that’s still just white, right?!”

That said, representation in the media has been a huge influence on me. Who I am. Who I strive to be. But this story is about who I became, or more specifically, who I chose not to be.

I was born in the 80s. That glorious time where everything was larger than life. Hair. Shoulder pads. Moody power ballads. But it was the quiet, hushed voices that seemed the loudest, saying things I would come to find out were wrong.

Overt racism may have been outlawed, but plain talk within a home or community…

Hate, in some ways, is like water. If left to sit, it leads to rot. If it moves unencumbered, it will follow the path of least resistance. What has less resistance than a child’s mind?

It’s difficult not to dip your toes in when you see people you know and care about already splashing about in the deep end. They offer words of encouragement, words no child should know.

The message is clear, “Come on in. The water’s fine.”

As a kid, I could hear the hum off a Macintosh II as it booted up for a magical trip across the Oregon trail. Certainly, I could hear whispers talking about “those people.”

Hushed voices during the day were replaced at night by a blaring TV. The words I heard then were a different story. From a Different World. Where happy folks were Living Single and trying to deal with Family Matters. Sister, Sister, let me say, it was eye-opening.

Sometimes, dulcet jazz played while people wearing heavy sweaters danced around their names. And, of course, there was the siren’s song: “In West Philadelphia, born and raised. . .”

Feel free to take a break and finish the tune. It’s practically a requirement when those words are spoken.

The noise crashed and twisted in my young head. Untangling that mess felt impossible. Who had it right?

I was a child. He was an almost adult. I was white. He was Black. And yet, I saw something of myself in his character. He had glasses I very much wanted. Mine were boring and blocky, sitting squarely on my face, with the audacity of not doubling as a pair of shades.

The idea that a nerdy guy was worthy of love struck a chord in me. That he could be slick and stylish and true to himself was something I never thought possible. I saw who I wanted to be on that screen. The fact that he was Black seemed irrelevant.

On what I still consider to be one of the worst days of my life, where I was struck by fear and illness, terrified to go to sleep because I wasn’t sure I would wake, A Different World gifted me with peace for a short time.

I’d love to say I grew up in some backwater town that no one could find on a map without the aid of a magnifying glass and detailed instructions. Where I’m from was less than an hour drive to a massive city. It’s easy to assume that the disease of racism is regional, but it’s also hereditary.

Around puberty, I discovered that I wasn’t “normal.” That’s in quotations because it might just be the most absurd word and has caused anguish for so many individuals. What I was, I had only heard in derogatory terms and dismissive tones. Kids like me knew there was a bar in town where “the fairies flocked to.”

At 16, late at night and alone in my room, a movie came on. It depicted a relationship I never dreamed possible. One where, in the end, there wasn’t shame. If Dwayne Wayne struck a chord, this was a guitar solo of the most beautiful music. Enthralled, I watched until the credits rolled. A quiet sob rocked my chest and I barely whispered—even though I was completely alone in the apartment—“I’m gay.”

Two years would pass before I could say that aloud to a friend. It was so painful that she later admitted that she thought the news would be I was dying. Truth is I was dying. Every day. For years. Until that day, I unburdened myself of a fundamental truth that could not be changed.

Seeing myself on the screen, reflected in different people, changed my life.

If hate is akin to water then love is fire. It fills us with warmth and light. I have seen a candle stay lit through a rainstorm. It sputtered. And flickered. And fought. But it didn’t go out.

Those who shout “woke” or “pandering” are dinosaurs. They screech and scream and roar, flapping leathery wings to rise above and be seen. But their time is ending. Progress was the first wheel, and it has not stopping moving since the dawn of time. Squawk all they want; they can’t stop it.

So, while the meteor may still be a ways away, I will sit around my flame. A fire, that no matter how desperately and deliberately others try to extinguish it, burns brighter every day.

Together, we can create a bonfire. While there may be those who choose to sit far away, huddled together, indignantly shivering in a freezing night, the way is always open for them to join us.

The night is cold and dark and wet. I promise it’s warm and welcoming around the fire. Plus, there’s always something good on TV. 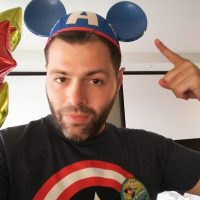