The Journey of the In-Between. {Book Excerpt} 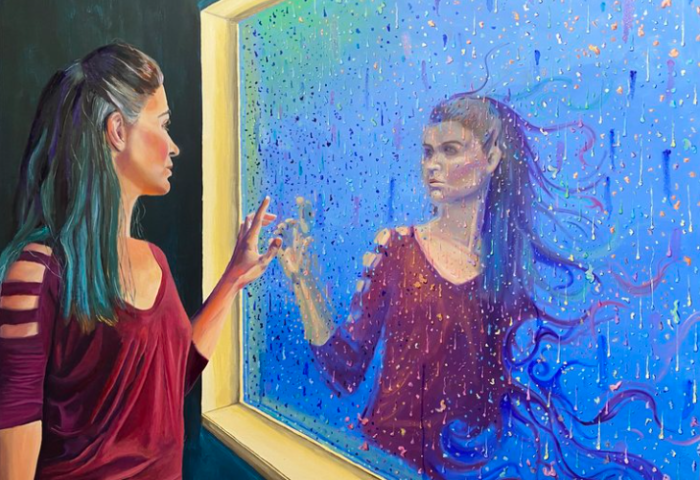 When faced with death, what eternal gift can one mother leave behind?

Told she has little time to live, Maji desperately wants to leave her daughters with the wisdom of her greatest life lessons before she dies.

She reflects on the identities she has held in the life she leaves behind: activist, nun, teacher, spiritualist, and mother.

From her youthful attempts to save the world to her mind-opening spiritual enlightenment, Maji’s story is one that explores not only what constitutes a good life, but what happens in the eternal mystery of death.

Illustrated with beautiful hand-painted images and steeped in Eastern philosophy, The Journey of the In-Between tells the story of a quest for self-realization, fulfillment, feminine power, and the eternal love of motherhood.

The following is an excerpt from The Journey of the In-Between, by Kyra Coates.

One day, she was cooking a late lunch on her tiny stove and a group of five deer crept within 20 yards of her site. They walked slowly, stopping to munch foliage, and looked up only when Maji turned her head.

She had seen this group before. It seemed they remembered her as well and decided she posed no threat. The woman watched them, contemplating the freedom there must be in being a deer. They had no agenda. Their life was to simply be. She laid her bowl with care on the ground. I think I’ll be a deer for a while.

She stood slowly and tiptoed closer to the deer. Once she stood within 20-feet of them, their heads sprang up as if pulled by the same string and their ears swiveled forward on full alert. The largest deer, clearly the matriarch, flared her black shiny nostrils, catching Maji’s scent. She stomped her hoof once with a huff as if to announce her authority to this intruder.

Maji stopped and turned her gaze, trying to appear submissive. The deer pondered her for a moment more, then relaxed, returning again to graze. Maji looked up, caught their disinterested eyes, and moved closer until she was about 20-feet from the deer. They didn’t flinch but instead continued their slow meander through the trees, stopping only to snack on a patch of greenery. They had accepted the human’s presence.

Maji followed them on their slow journey for several hours. They wandered for miles. As they grazed, she would break off pieces of a granola bar she had in her pocket and pop it in her mouth to join them in their meal. She followed their every move, trying to learn what it meant to be a deer. Whenever the animal would pause to listen for a sound, Maji would listen, too. She heard the shuffle of animals she never would have noticed on her own. When they lifted their noses to smell the breeze, Maji would sniff as well, occasionally catching an odd scent. She tried to have her feet crunch the leaves as gently as theirs, but found feet far more cumbersome than hooves. Peaceful ease filled her. She felt a connection to the rhythms of the world around her that everyday life never gave her.

After a few hours, they emerged from the trees into a large clearing, which opened up to a hillside covered in pine. It had been many hours since Maji left her campsite.

The sun was just beginning to touch the treetops in its descent. As her new “friends” moved down along the clearing’s edges, Maji stayed behind, realizing she would soon have to turn back to her campsite or try to find her way home in the dark.

She sat on a boulder and took a moment to look up at the sky, fading into a dark blue with just a hint of orange. To her left, the sun appeared balanced on the tops of the trees on the horizon. Directly across from it in the sky hung a full moon, also grazing the treetops. Maji had caught them both in that brief liminal moment when the sun and the moon shone equally as bright, when neither light nor dark dominated, and she stood between them both. The sky itself became a large Yin-Yang, a perfect balance of opposites.

Maji’s breath caught in her throat, and in a flash, like a light switch turned on, something expanded in her awareness. A sail had been unfurled in the wind. Her sense of self grew bigger than what she perceived through her five senses. Suddenly the filters of sight, smell, touch, hearing, and taste were revealed as unbearable limits.

A deep longing blossomed in her heart to reach out to something she couldn’t see but feel. She knew it was there, just outside the perimeter of what she could take in, but she didn’t know what “it” was. She wanted to pop her eyeballs out of her head so she could see around herself in 360-degrees. She wanted to rip all her clothes off so every inch of her skin could feel this mysterious force that ached for her to connect with.

But the fear that movement might break this sacred spell paralyzed her. Her heart pounded faster and faster in her chest, and tears spilled out of her eyes. Beauty itself pushed her from the inside out, aching to merge with the outside-in. She panted from the overwhelming grace of it all, and a small cry escaped her lips.

Then, just as the sun sank below the tree line, her body sucked her awareness back in. Maji looked around, blinking, expecting the world to be different. But everything appeared the same. Only she had changed. She had touched something, had a peek at some great mechanism, some force of the universe bigger than anything she’d ever imagined.

She watched as her deer friends began to walk into the woods on the opposite side of the clearing. The matriarch lifted her head and looked back at Maji. They locked eyes. Through the steady gaze of those black pearls, the woman felt a final confirmation that yes, indeed, she had just received a powerful gift.

This gift left her with a sense of peace, knowing that there was a perfect balance, an order, to everything as it unfolded. Her heart swelled with gratitude. And as the deer turned and disappeared into the forest, Maji laughed at herself and waved goodbye to them.

Then she turned and made her way back to her camp.

Order your copy of Kyra’s book, The Journey of the In-Between, through her website.

Related to this article: 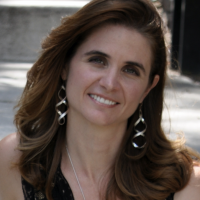 Kyra Coates has been an artist since she was 18 months old and studied at the Corcoran School of Art, and the Maryland Institute, College of Art. She became a professional art… Read full bio