The Secret of Communicating with Trees. Yes, Trees!

That’s the last thing I expected to hear as an answer to my question.

But, here I was with my back against the giant sycamore in the middle of Welles Park, talking to a tree.

Now, you may be thinking that the most odd thing about this scene is that I’m conversing with a nonhuman.

People talk with their dogs all the time. And, their dogs answer them with barks, growls, and facial expressions. We don’t think of this as strange or impossible.

Stephen Harrod Buhner, a poet and naturalist, believes communication with trees is not only possible, it is an essential part of caring for the planet. He proposes that in learning to function in acceptable society, we also learn to close down our ability to experience the extraordinary.

Buhner points to a scientific phenomenon called neural gating. Essentially, as we become more structured in our daily lives and less imaginative, our nervous system blocks out any material that deviates from what is considered our “normal.”

Musicians and artists tend to have more open neural gating. They can literally translate experience and emotion into music or onto the canvas. But, even their neural gating is toward the specific function of colors, brush movement, and musical note variance.

But, that’s a far cry from chitchatting with a sycamore tree.

None of these doubts enter my mind as I stand in the middle of a park in Chicago. I just nodded my head and laughed out loud. Yes, I suppose we are all cannibals when you think about it. The tree looked so stoic, and I think she laughed a little with the rustling of her leaves in the cool morning breeze.

You see, I had come to talk with her (it seems like a ‘her’) about a problem. I have been studying amateur herbalism for years, but always came up against a block when studying trees.

I felt like there was something in my way, and I set out to find it.

After meditating on the subject, a memory surfaced of myself as a young child pulling branches off a sapling. My neighbor, a kindly white-haired gentleman who always bought my Girl Scout cookies, confronted me. His face was wet with tears as he asked me why I was hurting a living being that had done nothing to harm me.

I had no answer. I climbed in trees all day. Their branches held me up and provided support. And here I was, being cruel to my friend.

That memory had haunted me in some way or another for years. My feelings about those actions were unresolved, and prohibited me from learning more about trees.

Trees have so much to offer us other than oxygen.

They have stories and history.

Many live for hundreds of years, and are silent witnesses to great and terrible things.

They also offer us food, and even medicine.

Trees help the soil stay in place and provide shelter for an endless number of mammals, insects, and other plants. And, I believe, they communicate not only with each other, but with us—if we are open enough to hear them.

But, isn’t it just your imagination?

Sure. Maybe it is, but I’m not the only one having this hallucination. Plant communication used to be a regular part of society, especially for shamans.

Eliot Cowan, author of the book Plant Spirit Medicine, recounts how shamans put themselves into trances to be able to journey to the plant realm and get answers to specific questions.

Even Western science admits that there is evidence that trees care for other trees that are ill, funneling nutrients and resources to them through root systems.

The HeartMath Institute is currently conducting a study called the Interconnectivity Tree Research Project that aims to prove that trees are much more aware of their surroundings than previously thought. And, the Japanese tradition of Shinrin-Yoku, or Forest Bathing, has become popular in the West for the positive effect it has on blood pressure and cardiovascular function in humans.

I could be imagining it. Or, maybe my neural gating is just open in that particular way.

Either way, my talk with this sycamore tree lead me on a yearlong adventure. I started by telling her my memory of traumatizing that young tree, and that I didn’t know how to make amends. She told me to get some tobacco, a big bunch of it, and sprinkle a little on each tree I meet. And that I should ask every tree for forgiveness, and ask that they see me worthy to communicate with, and to bestow their knowledge on.

So, I did. For one year, I walked around with tobacco in my bag. And, I stopped by every tree I saw in this city of three million humans and one-hundred-fifty-seven million trees. I put my hand on each tree I met, and asked for forgiveness and to be worthy of their attention.

I now happily learn about my friends, the trees, with no feeling of a block hindering my progress.

Once I asked the sycamore, “But, why tobacco? It seems a little cannibalistic, doesn’t it?”

She knowingly replied with a little shake of her leaves, and instantly my mind heard the words, “We’re all cannibals.” 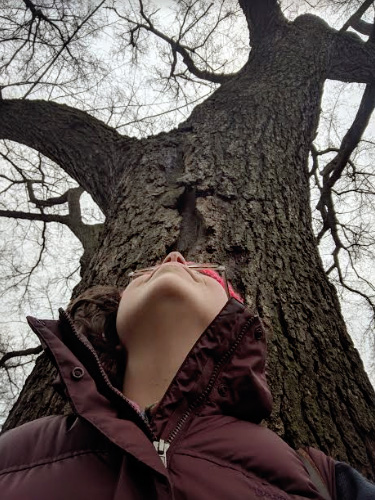 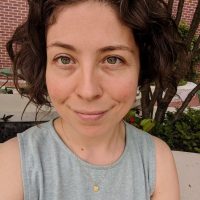 Sarah McLaughlin is a lover of all things hidden. An avid meditator and sometimes yoga teacher, Sarah lives in Chicago. She is a full-time licensed massage therapist and advo… Read full bio

3 Reasons Forest-Walking is Necessary for Every Human Being. Tree Hugging Isn’t as Bad as You Think. How a Couple of “Elites” Screwed Up Western Medicine for Everyone. Top 30 Plants to Detox Your Home. Five Ways Nature can Soothe our Minds.