Why Do We Feel the Need to Fix People?

How quickly we forget we are all connected.

There is no denying that we, in what is considered the “developed” world, are a culture of overconsumption, materialism, and convenience, with an acute affinity for “othering” and a hyper-focus on fixing people.

When people don’t line up with the binary that we hold for ourselves, we start to “other” them or we attempt to “fix” them because we see them as defective. Arguably, at times, this want to fix comes from a compassionate place. But the crux of the matter is, as author Laura McKowen puts it, “We pretend to know what other people should do.”

Here’s my thing, as an oddity in the society I grew up in, I often fell into the category of needing to be fixed across several scopes. Mainly, I was, and am, a deep feeling individual with a penchant for the whimsical and programmed with a default setting of depression. Thankfully, my perceived societal flaws could be tucked away or, in my teenage years, become buried by drugs and alcohol.

It should go without saying, but these less than societally endearing qualities are a privilege as they can be relatively hidden to fit in. To survive those formative years, as it were. And it wasn’t until recently that I was able to shine my own light into that darkness to uncover what I had buried. But that is a topic for another day.

When we (as a society) start to “other” people, it turns into an “us versus them” way of thinking about our connections and relationships. We ostracize specific individuals or groups, resulting in them being seen as less worthy of dignity and respect. This often precedes this need to fix these “others.”

Let’s be clear, we do not need to “fix” people; we need to support them.

Here’s a fun, little anecdote. Do you remember when the iPhone came out and the commercials with the brightly colored background, a rad song, and black shadow-esque figures of people grooving to the aforementioned rad song? And with those commercials vividly etched in our brains (the millennials know) came this new concept of apps, and the marketing behind it was, “There’s an app for that.”

In a less fun having way, that has been replaced with “there’s a pill for that.” Now, I am not a doctor, nor am I against medication. I am not against SSRIs (selective serotonin reuptake inhibitors) or prescription drugs that help balance serotonin levels or aid in neural transmission. There are reasons that (some) drugs exist. Le duh. But this overdosing of America needs to be addressed because people do not need to be fixed.

Here’s the prescription drug tea, the United States and New Zealand are the only two countries in the world that allow for direct-to-consumer advertising. Startling? Well, perhaps it goes without saying, but drug marketing is a lucrative business. Okay, marketing, in general, is a remunerative business. For example, I made much more money as a content writer than as a journalist. And I would argue that a lot more goes into a journalist piece over a commercial use piece. But I digress.

The heart of the issue is that drug companies are willing and able to spend insane amounts of money to offer an ever so easy solution to an actual or perceived health issue. Honestly, have you ever watched a commercial and thought, “Hmmm, you know what? Yeah, I am sad. I have trouble getting up in the morning. This drug must be meant for me.” Easy peasy, lemon squeezy, quick fix. Meanwhile, this circumvents the actual route one should take when considering drug “problem solving” use.

Let’s say that a drug worked for few people in lab tests. Would you want to know? Would that affect your decision? Who’s to say? But drug ads don’t even have to disclose that information. They really don’t have to disclose anything, like if there are alternative treatments, if the drug is absolutely necessary, or if there are other paths to achieve the same results, such as a lifestyle shift.

And all this is largely because the FDA does not, and logistically cannot, approve prescription drug ads in advance. I mean, they could if there were laws, at the very least, that required the screening of these ads before they are blasted unwittingly into our eyeballs. So essentially, the FDA sees these drug ads only after the general public as ads are submitted and reviewed while the ads are running on-air. And it could take some time for the FDA to correct inaccuracies if they are found.

If there is one thing to take away about prescription drug advertising, it is just that: it is all advertising. It is simply another brand trying to sell you a product. And in many cases, products that alter your body’s chemical makeup.

The prospect of altering your body’s chemical makeup without much proper procedure should scare you. But this is only one example of how we try to “fix” and “other” people. Often the other instances are far more egregious because they are directed at others instead of looking for a quick fix for oneself. Subjects like gay conversion therapy, anti-trans bills, covert and overt racism, abortion bands, concentration and internment camps, ableism, what is currently happening in Ukraine and Palestine…the list goes on, and it is exhaustive! So I’ll stop with these examples as I am sure you’ve already thought of your own.

As I mentioned before, the desire to “fix” doesn’t always come from a malicious place. But when we think we know what other people should do, we lose ourselves. We lose our connectedness to each other, and that is something worth remembering. 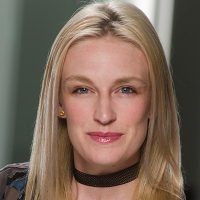 Lauren Bates has a passion for storytelling and authentic connection that she carries with her into every aspect of her life. She believes that compassionate service journalis… Read full bio