Guide to Connecting with a Yoga Goddess.

This is a followup to Dating a Yoga Goddess, also by the lovely, feisty Holly Westergren and via friends over at Sir Richard’s Condoms:

My favorite comment in the Elephant Journal galaxy in response to my article Guide to Dating a Yoga Goddess: Damsels, Dharma, and Distress is, by far, “I would sooner hug a cactus than date one.”

Well played, Sir. Now, can you please send in glamour shot of yourself hugging said cactus, when you have a moment?

I wrote that article in 20 minutes. I’m not telling you this to brag about my speed-writing skills, but rather as evidence that I work best when moved by Spirit, and Spirit alone.

Perform your duty equipoised, O Arjuna, abandoning all attachment to success or failure. Such equanimity is called yoga. ~ The Bhagahvad Gita

I felt I wanted to write something that would give me a sense of how inclined people are at this point in our evolution to think about themselves as Gods and Goddesses. The article has received 13,457 views and 57 comments and for me, the article accomplished what God wanted it to—to “GO REMIND HUMANS OF THEIR DIVINITY.” That was the task at hand, a message I received loud and clear after a long savasana (the final pose in yoga practice).

Clearly, the possibility that we are made in God’s image is still something that is difficult for us humans (especially the cynical self-loathing ones, which I still sometimes am) to accept. For starters, it means more responsibility and accountability and who wants that? And then, if you’re actually a God or a Goddess, well, then you have to start believing that we’re not actually flying this thing and then of course you must devote your life to the will of a Higher Power and that’s just complicated and requires a lot of change and pain and reeks of Christianity or something unsexy like that and I like my Sweaty Vinyasa Flow and Prana pants and Ganesha mantras just fine, thank you very little, “Yoga Goddess”– just who do you think you are? ( I can hear you all talking, by the way. Occupational hazard.)

Confession: I’m a Christian yogi. I can’t help it. And because of this realization of who I am, I do believe I was put here, in part, simply to confuse you. To disorient you. Ah, yes… the Orient… have you ever been? Cue Sitar. Look into my eyes….

Yes, these are my eyes. You have to tell people what’s real and what not these days on these here Internets. It’s laborious.

I would also like to clarify that yes, that is me in the picture that accompanied the article with the boots and my “skinny white ass” as someone commented. It was not some promotional ad for boots. It was an image I had in my head that I wanted to make so I enlisted the help of photographer Christopher Gabello (who I think thinks I’m insane and still thinks it is acceptable to fist bump a lady, for some reason) and an ex flame-turned-friend, a brilliant and hilarious rising star and new daddy, Bobby Buoncristiano, who I’ll get to in a minute. But lest you thought the male model in the picture was just some hunka hunka burnin’ love (which he is), he is also very much a real person. With a new angel in his life. Oh, to humanize models. Is it even allowed?

Now, if you look closely at this collaboration with Bobby you will see

that there are bruises on my legs, which are probably not even well-shaven. I did not want this image photoshopped even though someone suggested I should have painted on a tan. The image came to me in a dream. I know people say that shit all the time but its true. I had no idea what I would do with it or why I wanted to make it but that’s often the way it goes with stuff I decide to create. I knew I’d have a use for it some day. And voila. It lands in an alternate universe known as Elephant Journal. I still can’t bring my eyes to land on the site. I’m already Vata imbalanced enough. But apparently it was the portal my words needed to travel through.

Back to Bobby Hotpants. Bobby and I met when I was teaching a yoga class at a place where he was a personal trainer called IRONWORKS, which at the time often reeked of sweat, gym socks, meatheads and occasionally meatballs. Nary a box of Nag Champa in sight, yogis. I’ve always been more interested in teaching yoga in gyms and on the streets or in cubilces. I taught in the basement of this testosterone tank, against the backdrop of primal groans, the clanging of dumbells, and the non-stop pulse of some obnoxious music I always wished would go away. Still, there were those gym members who sought an oasis from that drill and I did my best to create some kind of sanctuary, despite the fact that many times, the soundtrack to Savasana was the blaring of “Eternal OM” on a busted up boombox with the meatheads on backup vocals nobody asked for. Still, the people came for the yoga. No matter how ghetto-fied the experience.

Anyway, folks, the point is, this whole concept of “Yoga Goddess” is of course, ridiculous. And whats more ridiculous is the fact that plenty of you were angered by it and plenty more of you were amused by it. The only thing I was really trying to say, I think, was that its time to believe in and work for something beyond your Self, in whatever way you feel God or your Higher Power is calling you to serve. And the path of yoga is one such way of quieting the mind long enough to hear the call and developing the courage to heed it.

Now, I sing “ Move Bitch, Get Out the Way” to myself most mornings in the mirror, followed by savasana to “Pie Jesu” from the Faure Requiem. So there’s that. The best definition I ever read of enlightenment was “One’s ability to be comfortable with one’s contradictions.” I think it was in a Deepak book. Now, some of us have more contradictions to wrestle with than others, so I thank you for you patience as I try my best not to make sense of any of them for your benefit and mine.

Read on over at the Sir Richard’s Salon. 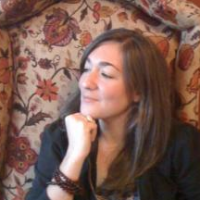 Alex Smith first learned asana from an 80-year-old man under a banyan tree in India and never looked back. She teaches a breath and alignment centric vinyasa flow and is grate… Read full bio