Healing the Tears of Loss.

I’ve asked myself where my story really starts too many times to count. Does it start the first time I got drunk? Does it start the first time I was arrested? Or the second? Or the third? Or the time I wrecked my car? Or on one of many sleepless nights I endured, drugs pumping through my system? Does it start when I finally came out the other end, purchased my first yoga mat, and stepped into the studio? How about the time I finally stopped doing yoga for the sport of it, decided to truly practice, and broke down into tears on the mat? That feels right. Let’s start there.

I was on the tail end of a really fantastic time. Well, it depends on how you define fantastic of course. If you think fantastic is a series of parties, embarrassments, hangovers, highs so high you feel you’ll never come down and lows so low you feel you, well, you don’t feel anything, then I had a fantastic ten-year run. So fantastic, it had to end somewhere.

That somewhere was a rented town home in Los Angeles, where I’d be shacking up with my college sweetheart (who is now, spoiler alert, my wonderful husband) and making a go at an honest life. Admittedly, I had started cleaning things up years before, but starting a job and finishing it are two different things. I started this particular job  – the one of coming to terms with life and death – across the street from my home in a martial arts studio. I signed up for a free trial yoga class. I sweat. I stretched. I came home. I thought twisting chair pose was exceptionally advanced.

I found an actual yoga studio. I went again, and again, even committing to twice a week there for awhile. But that was the extent of it. Or so I thought as I headed into savasana one evening, tired from my standing sequence, and ready for some simple rest.

“As I name each body part, mentally go there and experience it,” my instructor said. “Right hand, wrist, palm …” on and on, as I’d heard many times before. I lay there, allowing the bliss of savasana to pass over me, right up until I heard the words, “Left knee. Back of the knee.” And there it was. My moment. The first time I cried in yoga. The beginning of this story.

I had heard teacher recount episodes of students getting emotional when they “got into the hips.” I thought it was bullshit, quite frankly. Bullshit is only bullshit until it’s your bullshit, though, and then it’s for real. It became real for me when I “got into my knee,” the same knee that was totally reconstructed after a collision on the soccer field. The knee that would forever end my collegiate athletic career. The knee that would send me spinning into the oblivion of an alternative scene at my college. The knee that took away everything familiar to me. The knee that … just, the knee.

Well, maybe I didn’t realize all of that right away. But I did realize something was … not right. I was (mostly) sober, (generally) happy and (fairly) healthy. So why the hell was I crying?

My tears were those of loss. No one had died, at least not literally, but I felt a loss so deep in that knee I wondered whether it could ever be mended. The next many months of my journey on the yoga mat were about mending, healing, replacing that part of me taken on the field one Spring day in St. Louis five years before. I focused so hard on that loss and the gaping hole it left in my life. It was like the small blemish on my face I knew was there no matter whether anyone else saw it. It was all I could see when I looked in the mirror; long after it had healed, my mind still perceived it. I focused so hard on that loss, it grew in size rather than dwindling.

It grew larger day by day until, in one sudden epiphany, it simply disappeared. The triumph came in a simple passage:

“The best way to say, ‘Thank you, God,’ is by letting go of the past and living in the present moment, right here and now. Whatever life takes away from you, let it go.” (The Four Agreements)

And when I really thought about it, I realized life had begun taking from me long before my injury. From the time I was born, life was just one big exercise of losing things. Losing dignity, losing respect, losing relationships, losing innocence. I was born so close to God, and life kept taking pieces of my divinity, driving me further and further away.

When I read this passage, I realized it was my duty, my way to honor the God created me and kept me alive all those years, to simply allow life to take whatever it wanted to from me. To look a loss straight in the eye and say, “It’s okay. I am not my dignity. I am not my self-respect. I am not my innocence, or my winning record, or my youth. I am not a soccer player or a girlfriend or a daughter. Have all of that. I am a child of God, and I have all I need. And you, Life, cannot take that from me.”

This was the true beginning of where yoga would take me … but it is a very good beginning. 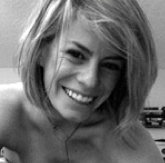