Rubber for Everyone: Mat Rats of All Kinds.

It’s only January and I’ve got Wanderlust on the brain. The Squaw Valley event isn’t for six moths, but I’m already hyped for the food, music, teachers, weather, and for the people. By which I mean the fellow attendees—

With so many different yogis at the festival, the people are fun to watch.

Every yoga festival’s got its earth mothers. Food-wise, if it ain’t raw, they ain’t eatin’ it. These gals aren’t wearing a single article of clothing that’s outside the brown-green-brown color spectrum. Their jewelry—and there’s no shortage of it—is all polished rocks. Red jasper to temper emotions. Turquoise to amp up creativity. Green agate to keep them centered. And the ever-important moonstone to hone their innate intuition. Their anklets jingle when they step back into downward-facing dog. Often seen rooting through trashcans for that plastic water bottle some barbarian didn’t put in the recycle bin, they are at the festival to connect. To find stability in The Earth.

At any festival worth its socks you’ll see your yoga celebrities, people whose über-hip yoga gear might come complimentary from the manufacturer and who have cultivated practices (and egos?) so robust that they have devised their own yoga style, sometimes eponymous, a feat that’s exceptionally remarkable seeing as the practice has been around for thousands of years.

With the yoga celebs come the groupies, sycophants that follow these superstars around the world, taking their classes and nodding wildly at their jokes so that everyone else in the room is very clear that they’ve heard this one before. If a fleck of spit escapes the celeb’s mouth and lands on the panting toady, they will spontaneously faint.

The brand whores will hit up the festival too. Here’s how you can spot ‘em: they only practice on Manduka mats, they drink bottle after bottle of Búcha, and when they’re out of that, they sip agua from designer Siggs. They are girls—it’s always girls—dressed in Lululemon, Hard Tail, or Lucy from head to toe (literally, as they’re sporting everything from logo headbands to flips flops). Their entire ensemble costs no less than three and a half bills. And that’s just today’s outfit.

And then there’s your bona fide hippies who’d never dabble in that brand nonsense—they hand-sewed their drawstring pants of organic cotton. They pitch into an 8 a.m. class in the clothes they slept in. They spent the night in their ’89 Subaru Outback in the parking lot, where they didn’t have  a permit to camp—that’d just be submitting to The Man. Their yoga mats are fancy with footprints from yesterday’s three hour kirtan session. And these people give off a sort of special kind of B.O.

Spliced throughout the above individuals are the rest of us—folks whose relationship with yoga is a bit more than a class here and there. We aren’t disciples of any one celeb. We wear off-brand yoga leggings, Target flip flops, and the first tank top we can find that doesn’t smell like yesterday’s class. We work in common jobs that have nothing to do with energy conservancy or organic co-ops. We change from our suits and leather pumps into our yoga gear at the studio after work.

And yoga welcomes all of us.

Some of us practice Bhakti, the yoga of devotion. Some of us are all about the heat. Some only feel authenticity of the words are in sanskrit. Others of us can’t remember the name of that one pose where you sit criss-cross-applesauce. We might join in the chanting. We might just move our mouths pretending to chant. We might close our eyes in ecstasy. We might keep them part-way open to see what the hell it is we’re supposed to be doing.

Festivals have taught me that there is a kind of yoga for absolutely everyone no matter your look or intent. I’m not being dramatic. This isn’t some hyperbolic crazy-talk born of sampling the hippie guy’s special brownies. I mean it. Keep heading to the mat—it doesn’t matter who you are or if you can bend in half—there’s a more than good chance you’ll find something you didn’t even know you were looking for.

Author has been given permission to use photos from: Ashley Thalman Photography. 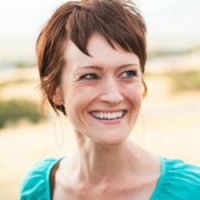