Imagine a society where sexuality is an acceptable part of everyday culture. ~ Candice Holdorf

Sex is something you dive into with gusto and like it every bit as much as he does.”

Can Pornography be a Catalyst for Spiritual Growth?

Imagine a society where sexuality is an acceptable part of everyday culture.

Where children are taught to appreciate their bodies, rather than fear them.

Where it’s not just ‘normal’, but encouraged to explore the depths of one’s sexual desire, kinks and all.

Where sex ed isn’t squeezed into a semester of gym class and taught by some ex-football player who keeps stumbling over the word ‘vagina.’

Now return here, to the center of 21st century America. Sexuality, especially female sexuality, is a battlefield for possession and control, as evidenced by the current controversy surrounding abortion, planned parenthood and the definition of rape. Our most touted (and emotionally safest) form of sexual education is fear, a.k.a. ‘don’t do it, unless you want to get a disease or unwanted pregnancy. ‘ Archaic sodomy laws linger on the books in many states and the legal recognition of same-sex marriages remains several election years away from nationwide acceptance.

We are a society that’s afraid of sex and we’re too proud and frightened to admit it.

However, as evidenced by the fact that the number one elephant journal article for the past five weeks has been a nude yoga class led by a Playboy model, I think we can safely say that all of us (even the sanctimonious yogis) aren’t done with sex yet.

Of course, we aren’t watching her to perfect our Adho Mukha Svanasana. We watch her because she’s naked and hot. And there’s nothing inherently wrong with that, just as there is nothing wrong with feeling aroused when we see two people having sex.

Regardless of our opinions of what we see, we are often affected on a primal, physical level by watching porn—whether it’s engorgement of our genitals, watering of our mouths or flushing of our cheeks. It’s all an example of orgasm bubbling to the surface. Whether or not we are in agreement with our experience determines whether this orgasm expresses itself as turn-on (yes, I’m present and totally accept what is arising for me) or tumescence (what the fuck is this BS!?).

Now, if I’m being perfectly honest, I’m not a huge fan of Playboy’s yoga video, just as I’m not a huge fan of conventional, i.e. male-marketed & produced, porn. It can feel cheesy, often fake and is simply not to my taste. I feel like much of what mainstream media bombards us with lacks authentic desire and is meant to capitalize on insecurity and ignorance.  It tamps down our ability to feel rather than invites us to sit in the uncomfortable magnitude of our orgasmic power. It’s something I call ‘SEX-sationalism.’ It is meant to titillate and entice, but rarely satisfies—sort of like Chinese food for your cock.

Unfortunately, we’ve become a nation of Marlboro men masquerading to disguise the fact that we have no idea what to do with a woman’s pussy and hide our fantasies that may (gasp!) involve another man.

On the other side, we’ve become a nation of Cosmo women, who act like we’ve got it together in bed, but have absolutely no sense of our own pleasure. Or we hang on to our virginity for dear life (as if anyone could actually possess such a thing) lest we be thought of as unworthy for marriage.

With all this culturally ingrained pretending, it’s no wonder we fear speaking about sex to our children, who then have to resort to the next best thing for a sexual education: surreptitiously discovered pornography, which, thanks to the digital age, more readily accessible than ever.

And this is where things can really go off track.

Therefore, if we wish to be the primary educators for our children and foster their sexual health, we must take a look at healing our own sexuality, And if we wish to liberate ourselves as sexual beings, we cannot continue to scrutinize pornography from the lens of shame and judgment; we must be open-minded and curious enough to investigate the need that pornography serves rather than relegating it to the recesses of our shadows.

Which led me to ask the question, “How has pornography affected you positively?”

For many, the answer was simple: it’s fun. It makes them feel good. Seeing images of beautiful women is a pleasurable experience, and, if kept as an occasional treat and in total transparency with partner(s), can contribute to a well-rounded sexual diet.

An answer that came up repeatedly for women was that it was the first time they had ever seen a female in a state of orgasm, i.e. a woman who was actually enjoying herself during sex. No guilt about taking her own pleasure or touching her own body (my friend, Vixen on the Loose, even wrote a little haiku about it).

1. Desire. The people you see on the screen are not actors (though not necessarily unprofessional). This means that they are having sex with someone they actually like. They are internally motivated to do what feels good for them in the moment, as opposed to the director telling what to do so it will look good for the camera. And they are certainly not adhering to any sort of A+B=C sexual script. Again, this is #realworldsex, #realworldfeelings, #realworldrelationships, #realworldeverything.

Of course, Gallop sets firm boundaries to keep the content within the limits of ethics (no children, no animals) and taste (no scat). And it’s this part, knowing her edges, naming them and honoring them, that sets a tight, clear and safe container for play.

I was lucky enough to have a mother who believed that if I was old enough to ask about sex, I was old enough to know about it. She never shielded me from proper anatomical terms, made up stories about storks or made me feel ‘wrong’ for asking direct questions. Through this level of respect, acceptance and personal freedom, I made educated sexual choices aligned with my personal integrity. 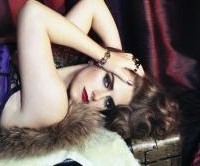