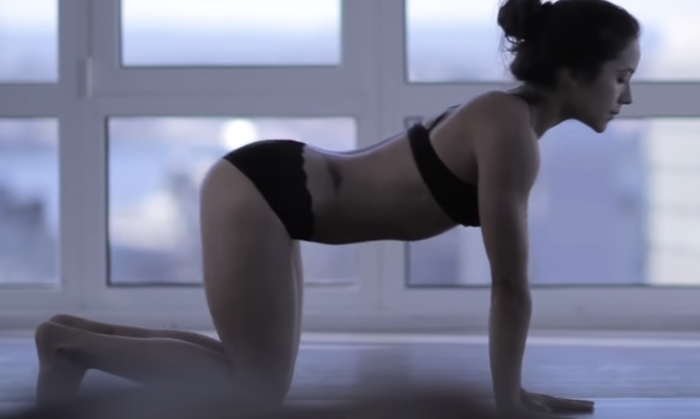 A friend preparing to take her first yoga class asked me what she should wear. “You are going to move around a lot,” I told her, “so I’d suggest either something very loose or something very tight, depending on what makes you comfortable.”

What I did not tell her is that she should go in her underwear.

I imagine that many readers of the elephant journal have seen Briohny Smith’s “Yoga By Equinox” video, which features a woman in her underwear practising yoga.

When “Yoga By Equinox” first made its rounds on the internet, I got involved in a long discussion on social media about the sexualization of yoga. Many female friends were thrilled to see this video of a strong woman with a strong practice finding such popularity.

Then I asked “Why is she in her underwear?” There was much booing and hissing at this comment, and some suggestions that I was being a reactionary jerkface. Well, maybe, but I think I was expressing the paradox that a lot of yoga dudes face.

We are awfully fond of strong women who have amazing yoga practices. We are also fond of women in their underwear.

We exert a lot of effort keeping these notions separate in our heads.

Dudes may wander into classes as tourists to check out the sights and the tights. I sometimes wonder if this is the reason that so many yoga classes have so few men attending regularly. I’ve talked to many guys who have said they tried out a couple of yoga classes but spent all their time taking in an eyeful of spandex instead of listening to directions on postures. They don’t come back to yoga: instead they stick with golf and beer.

We hate being that creepy dude that you talk about after class.

In truth, I may have been one of those dudes. I dabbled in yoga on and off for years, enjoying the exercise and the view but never really understanding what yoga was all about. When life’s challenges motivated me to shift yoga from an occasional hobby to something to save my heart and soul, I was still struggling to keep my eyes on my mat and off all the beautiful bodies.

Now two years later, my focus is on my breath and what happens on my mat. I’ll admit my eyes do still sometimes wander, but it is to look at these amazing women and their beautiful practices—and I do practice with beautiful women.

I spend hours every week practicing with women with beautiful bodies and beautiful practices. Sometimes, it’s the young woman who can find a quiet meditative space in headstand. Sometimes it’s the grandmother who finds comfort in her body for the first time in years as she stands in tadasana with calm and steady breath.

Underneath the spandex, yoga pants and Bikram shorts are women who grow more calm, steady and confident with every well-earned savasana.

I wonder if they see similar changes in me, because increasingly that’s the image I see reflected back in the mirror.

My favorite yoga instructor is a very attractive woman who, while she has a rocking bod, usually prefers to dress modestly in life as well as in the yoga studio (I may be biased as I am also married to her). When she walks through class, she projects athleticism, grace, and confidence, without a lot of extra skin. Her classes are often at least half-full of men, and she’s built a great following at a factory, of all places, where men and women come in to practice between shifts.

Those guys aren’t there on the hope that this will be the rare day that she wears tight leggings or the off chance of a wardrobe malfunction. Those guys come because everyone—male and female—walks away from the class feeling closer to their best self.

Should women stop wearing tight clothes to yoga class? Hardly. It’s not like yoga is not the only place where guys face the tortures of being surrounded by beautiful women; yoga isn’t even the only place where we are surrounded by yoga pants or lots of skin. Most classes are 90 minutes or less, not an unreasonable amount of time to ask a dude to stop gawking like a farm boy on his first trip to the big city.

If he can’t, it might be time for him to consider taking up being a more centered, grounded human being.

(I hear yoga is good for that.)

A final note to all the women I practice with: if you think you see me sneaking a look, well, you caught me—I am checking you out. Whether in yoga pants or baggy sweats, you inspire me in every class. Thanks for sharing your practice with me.

Chris Hayes is a safety professional and amateur yogi. Learn more about him at his blog.