How to Make Friends with Suffering. ~ Jacqueline Stowers Walk into any yoga class, and we will hear a lot about healthy relationships—for good reason.

Healthy relationships—with the self, with partners, with family, friends, even food—are crucial to overall well-being and happiness. It makes sense. Until one day, we roll out our mats and someone asks if we have a healthy, balanced relationship with suffering.

We freeze. We don’t know how to answer. For a moment, we even feel a flash of anger. We’ve spent years practicing detachment, striving for a way to transcend suffering. And now, someone is asking us to give it a big, healthy embrace? We want to shout that suffering, by definition, is the absence of balance. It defies all notions of equilibrium and peace.

The suffering I’ve known does—and ours has been no shallow relationship. Suffering and I have been close. Really, really close. I’m talking no boundaries, all-or-nothing, more than just friends.

Suffering used to sleep beside me, slither under the covers, wake me up at night like a hungry lover. It used to hold me. Suffering used to keep me warm. It kissed me in the morning, dragged me out of bed, lured me down tunnels, taught me to see in the dark.

We were Siamese twins, tangled at the root, feeding off the beat of the same heart—so close I couldn’t tell where my pain ended and I, myself, began.

For years, this was my identity.

I’d earned my scars, my hands were full, and my pain was what I had to offer the world. I didn’t want to rise to the light; I wanted to drag the world down into the mud with me. I wasn’t malicious. I simply believed that I understood something that others were too blind and stupid with happiness to see.

Suffering wasn’t just my truth, it was the truth.

Any other way of relating to the world was phony and shallow, dishonest and downright insulting. I’d become self-righteous. Who was I to seek happiness when people were starving, living in gutters and refugee camps, being slaughtered by the dozens?

Suffering wasn’t scary anymore. It was my coat of arms, shielding me from the unknown. Nothing could get past the war paint I smeared on my skin, the wounds I wore on my sleeve. Nothing could touch me. I was safe. I was attached to my suffering and so it proliferated, and I suffered more. I never stopped to wonder what had happened to the woman beneath all the scabs and grit. I didn’t want to find her.

Somehow, I had become more afraid of my own authentic self than of any suffering life could throw in my face.

That’s what brought me to the practice. I had finally found a space where it was safe to peel away these layers at my own pace, a way to look myself in the eye without flinching. I shed years of pain and confusion, I sweat and cried and laughed, and it was glorious.

I rejoiced in my newfound vitality, in the weightlessness that accompanied the act of cleaning up the mess I’d made over years of destructive living. There was more air in my lungs, more laughter in my days, more compassion in my heart. I had so much to give to the world. For years, I shut my eyes in savasana and I didn’t see darkness. I saw hope.

I had done it; I had kicked suffering’s ass.

Then came the old, familiar knock at my door. It was such an inconvenient moment, such a high point, such a beautiful, balanced day. But there we were again, me and my oldest, coldest of friends.

The room started to cave in on me, and all at once I could see that the walls weren’t made of light—they were made of illness, uncertainty, death. There was nothing to do but fight for the bliss I had come to know and love. The bliss to which I had become deeply attached.

I used all my strength to try and push suffering away. I was over-productive. I set wildly high standards and met them all. Going to yoga class became synonymous with escape, my mat no longer a place of peace but a place to hide from life.

I ignored my pain and insisted that everything was okay, that the future was holding out a golden guarantee—two more years of uninterrupted happiness, three more, five more. I could see it all so clearly; if only I could reach it. Then it hit me: I wasn’t kicking suffering’s ass.

So I slowed down, and have taken up the task of reacquainting myself with suffering, but not in the same, all-encompassing way as before. This is a constant work-in-progress, and there are no easy answers, but I’ve learned a little along the way.

I’ve learned to wake up every day and remember that I am a student, that there is no limit on what I can learn if only I’m willing to listen. This makes it easier to access the gratitude necessary for me to accept my pain and discomfort without drowning in it.

Losing something hurts, but it can also awaken the spirit to a deeper appreciation of what is here now. Everything becomes more precious, despite the pain. And I’ve discovered the key ingredient to achieving these feats: the breath.

Breathing big and deep, slow and sumptuous, creates so much space inside the body. And in that space, suffering can coexist with love, with peace, with gratitude and joy.

It’s not easy. Creating enough space for this abundance is work: a lot of work. It’s the strength to stand up every single day, after every single mistake, and start all over again. It’s believing that a light is still burning, even when we can’t see it. It’s not shutting down or looking away when things get unbearable.

And I mess up all the time. But I can share the one path home that always works, no matter how far I’ve wandered. I place one hand on my belly and the other on my heart. I close my eyes. I breathe. 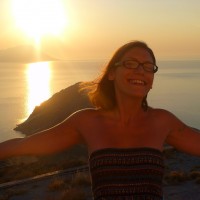