Newsflash: Being Gay Does Not Equal Having HIV. 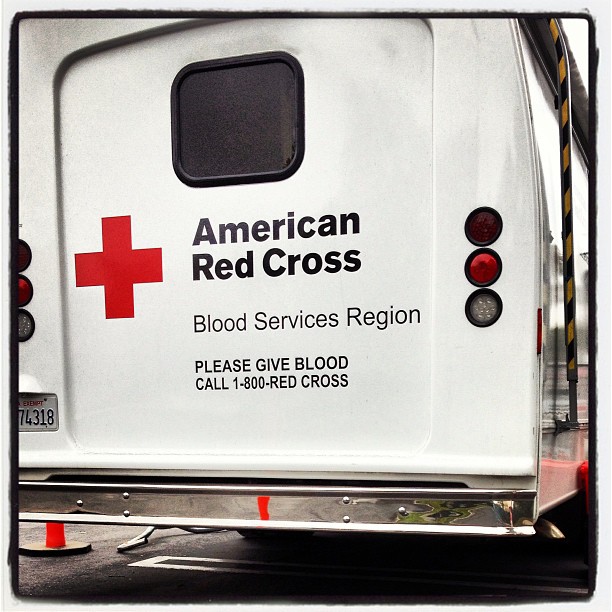 When I heard that the gym across the street from my office would be holding an upcoming blood drive, I logged in to the Red Cross website immediately and scheduled an appointment.

I am an enthusiastic advocate of donating blood, and was thrilled to have the opportunity to walk across the street and donate on my lunch break.

Giving blood is one of the most rewarding experiences a person can have. Our bodies are filled with this liquid that can easily replenish itself, and all we need to do is take an hour of hour time (even less sometimes!) to lie back and fill a small bag with the gooey stuff.

That hour of time (and bag of gooey stuff) can help save another person’s life!

It takes so little effort on our part, yet those efforts go an amazingly long way! In an attempt to encourage friends in the area to stop by and donate, I “checked-in” on Facebook and posted, “Blood drive today! Goes till 6 pm. Just do it!”

One of the comments my post received later that day read, “They don’t take blood from gay men.”

I had wondered about this when I read through the donor’s questionnaire and saw questions asking (men specifically) about sexual orientation and if they’ve ever had sexual intercourse with another man.

On Facebook, I responded to my friend, “That must be frustrating.” (A genuine sad face emoticon was included.)

He added, “Yes. And because I admitted, when asked, to having sex with a man, I was told my name and social security would be barred from donating blood. Ever. American Red Cross.”

I dug a little deeper (Google search), and I learned that this is not actually a policy administered by the Red Cross, but rather something that comes from the Food and Drug Administration. The Red Cross is legally obliged to adhere to the FDA’s policies.

But regardless of who made the rules, the fact is, if you fall into the category of MSM (men who have had sex with men), you are banned indefinitely (forever?) from donating blood.

Yep, the D-word. I said it. And no, I don’t have my head in the sand—I’m aware that gay males continue to be a high-risk community for HIV and the AIDS virus. However, a lot has changed in the past 30 years.

You see, back in 1983 there were some folks who received blood transfusions who later started showing symptoms of AIDS. It appeared that some blood donors must have been HIV positive, for this to occur. At the time, there was no way to test blood or plamsa for HIV, and so the FDA opted to ban sexually active gay men from donating blood, since that community was the most likely to spread the HIV virus. A few years later, HIV testing became available, but tests couldn’t detect the infection if it was new. Additionally, it could take months before one received positive or negative results. So at the time, this appeared to be the best way to protect the blood supply from infection.

However times have changed, and science has come a long way since the 1980s!

There is now an FDA approved test that can yield results in 20 to 40 minutes! And these new tests have been cited as extremely accurate.

And the thing is, all donated blood undergoes vigorous testing to ensure that HIV (and other blood diseases) are not  present in the donated blood. So why are gay men still banned from donating? Especially when the need for blood is so great?

It pains me to think of someone attending a blood drive, wanting to selflessly give to those in need, and then being turned away after honestly answering a question about sexual orientation. That has got to be an incredibly disheartening feeling.

I reached out to my friend to ask him more about what he experienced. This was his response:

After the questionnaire a woman came in and immediately explained to me that because of my admission, I would not be able to give blood, ever. She went on to inform me that my identification information and social security number would be registered, and any attempt I made to donate in the future would be denied.

I was so sad  that I would not be able to give blood, knowing how valuable it is to have people donate. I was frustrated that basically they were linking HIV to any gay man  who has had sex!

I never told anyone about this until you posted that you donated—I think it’s a wonderful thing to donate and it’s so desperately needed, so I would never discourage anyone to not donate.

This is what happens to many would-be donors!

A Men’s Health  article, written in 2013, chronicles David Dassey’s experience as a gay blood donor. Dassey used to donate blood every year, until the 80s when the ban on gay male donors came into play. At over 60 year old, he maintains his clean bill of health, yet his donation is denied.

Just because he is gay, his blood is considered to be a bigger threat than the blood of a heterosexual man who has been treated for chlamydia, syphilis, and venereal diseases within the past year!

But not if you’re gay.

If you’re gay, it’s game over. How is this acceptable?

Yes, of course measures should be taken to keep the blood supply clean and healthy. But discriminating against a particular group of people is not the answer.

Shouldn’t more emphasis be put on the behavior  of individuals? (Strictly in terms of health and disease prevention.)

Man or woman, gay or straight—what sexual behavior the person currently practicing? Is the potential donor promiscuous? Are they having unprotected sex with many partners? Or are they in a dedicated, monogamous relationship with one partner?

In terms of blood donation, shouldn’t the promiscuous party be deferred (for X amount of time) before being permitted to give blood again? And if a gay man has been in a committed relationship with just one man for over a year, then shouldn’t he be allowed to donate? (Remember, all blood donations  are tested for the HIV and other diseases.)

Isn’t it illogical to turn away a whole group of healthy people, just because of their sexual preferences?

Yet, the FDA refuses to revise their policies.

In a takepart.com article that appeared earlier this year, the following was reported:

“Today, many countries have donor restrictions similar to those of the U.S., but because of recent medical evidence that it could no longer be justified, the ban has been lifted in Canada, South Africa, Australia, Sweden, Japan, and other countries. Instead, these countries have imposed a deferment window between having sex with other men and donating blood. In the United Kingdom, where the deferment period is one year, there has been no reported HIV infection through blood transfusion since 2002. The FDA estimates that in the U.S., the risk of contracting HIV from a unit of blood is one in 2 million.”

Heck, there’s an entire Wikipedia page, dedicated to this controversy!

Meanwhile, I receive an email from the Red Cross every few of months, mentioning the great need for donations because of an on-going blood shortage.

Gay or straight—if someone is healthy, willing and able to donate blood, then shouldn’t we let them? Don’t we need all the help we can get? Don’t we want to save lives?

Then let’s do that!

Let’s let educate ourselves, so we can move forward and help more people, instead of being stuck in the past!