Photoshop Had Nothing to Do With My Anorexia. ~ Lynn Bonelli I was never the type of girl to read Cosmo or worry that my jeans didn’t bear the Jordache or Gloria Vanderbilt label.

My schoolmates teased me, calling my sneakers “butter cookies” because they were some off–brand and not Nike or Reebok. I didn’t really mind because I was a tomboy and far too busy reading J.D. Salinger and Stephen King, riding horses and dreaming of competing at the Olympics.

Most of my adolescence was spent as a working student at riding stables. So my entire wardrobe consisted of barn clothes for the most part (jeans, t-shirt and a plaid button up for ‘layering’). I cut my hair short since it spent countless hours under a riding helmet and it seemed rather pointless to fight a losing battle against hat-head.

My older sister and I weren’t particularly close at the time so I didn’t really have anyone to show me the ropes regarding make-up and hair or putting together cute outfits. I didn’t have a boyfriend in school and therefore didn’t attend any dances or social gatherings which would require any more effort that washing my face and dotting on some Clearasil.

I also didn’t have any weight issues.

I ate what I felt like eating and got plenty of exercise between my P.E. class and working at the barn. Dieting was something my mom and her friends did and something I felt I wouldn’t need to worry about until I got married and had kids too.

I had heard about a phenomenon called ‘middle-age spread’ but I was only 16 and had forever before I needed to worry about that. Although I can’t remember stepping on a scale outside of the doctor’s office for my annual checkups, I believed I was pretty “normal” in size. 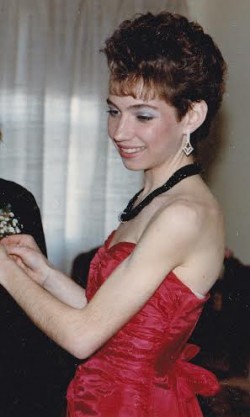 So why would a normal sized 16 year old who didn’t read Vogue, Cosmo or celebrity rags become obsessed with losing weight?

For me, anorexia was about control, which later turned to self-punishment and then habit.

I didn’t want to be a model. I didn’t feel the pressure for my body to look a different way and I honestly did not start off with a distorted body image. In fact, I knew I was fit since my P.E. teacher had recently done body fat testing on her students—this was 1987 and fat calipers were all the rage. I had the lowest body fat percentage in our entire female class, not that I was even sure what that meant.

But there was a major upheaval in my life right before I stopped eating.

My dad got orders to Alaska. As an Air Force brat I was used to moving every two-three years but this time was different.

I was 16 and about to enter my senior year of high school.

I had a job working at a local show barn and I had bought my own horse with extra money I had earned at the barn.

Even though I’d never had a boyfriend I was interested in dating a particular classmate (if only I wasn’t so shy) and I had friends.

This move meant I would have to give it all up…including my horse. My life felt out of control and I was enraged by the injustice of it all.

My experience with anorexia falls outside of what most of society thinks triggers such behavior and outside of what the anti-media community believes. If anything, anorexia was a way for me—a self-proclaimed Polly Do-Gooder—to rebel and be a non-conformist due to these major changes in my life. It had nothing to do with my weight, magazine pictures or societal expectations.

I think it’s a dangerous assumption, especially for those directly affected by eating disorders, to view this as strictly a weight issue. Attempting to place the blame on photo-shopped pictures and underweight models as the root of this disease may totally miss the point completely. {This is my own opinion based solely on my personal experience with anorexia 20 years ago. There is plenty of research out there to support or deny specific root causes to this illness. What I believe is that the mental illness comes before the pounds come off.}

A post by Dr. Sarah Ravin, a Florida based psychologist specializing in adolescent eating disorders, states:

“I do not believe that the media plays a major role in the etiology of eating disorders. And yet, in much of the eating disorder world, it has become accepted as an unspoken, self-evident truth that patients with anorexia and bulimia have developed their illnesses in large part due to their desire to emulate ‘the thin ideal’ which our media promotes. “

Tell me I should eat and I’ll tell you I’m full.

Tell me I’m too thin and I’ll drop a few more pounds, not because I feel fat…but because I can, regardless of what you think.

That was my mentality.

When we arrived in Alaska I pretty much stopped eating.

I also started working out, something I had never done before. I signed up for aerobics classes that coincided with dinnertime so my parents wouldn’t get suspicious when I didn’t eat with them.

Hiding breakfast and lunch was a piece of cake (no pun intended).

With the help of a six pack of Diet Coke a day habit I dropped weight like nobody’s business.

Within three months I was a stick figure and seeing a shrink three times a week.

When I was finally hospitalized (I was 16 years old, 5’4″ and 84 pounds) and forced to take in calories, I found something else to control…my water intake. Water! It has no calories and obviously would have no impact on my weight but I refused to drink it anyway…and often dumped it into the pillow I sat on to protect my bony body from bruising.

I needed to remain in control of something.

I had done such a great job of losing weight (I’m an all or nothing kind of person) that after several months of starving myself, I was terrified not just of gaining the weight back but that I wouldn’t be able to stop the weight gain…ever.

I easily imagined myself tipping the scales at over 300 or 400 pounds. Even after forced weight gain from my four month stint in the mental hospital, I clung to my old habits, convinced it would provide a cushion for the inevitable weight gain that comes with age.

When it came to trying to win this battle and save my life the second time around, I was lost and confused. 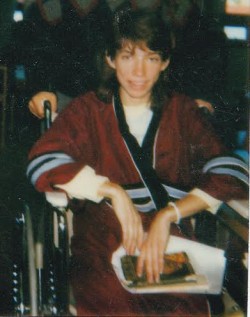 Most of the doctors I spoke with had little to no experience with anorexia and dealt more with drug abuse, teen alcoholism and the occasional schizophrenic. Assuming that I was only concerned with being thinner was the wrong approach. And while I did get a rush from watching the numbers on scale drop, it was only because it meant I was the winner, the one in control.

But I was exhausted and scared and although I had often desired to just fall asleep and never wake up, I knew I didn’t want to die.

It was not an easy task to recover.

I gained a lot of weight, not just because my metabolism was wacked, but because I forgot how to eat and now knew what it was to “diet.” Strangely enough, having never had a weight issue before, I soon succumbed to a 20 year battle with yo-yo dieting all because I had starved myself and forgotten how to eat.

I became consumed by food rather than consuming food.

It had become so much more than fuel for my body…it was the enemy and the comforter, the problem and the solution, the life giver and the life taker and (for many of us) it becomes our all-consuming identity.

My body recovered but my mind still hasn’t (at least not fully). I find I am more affected by the media now than I ever was when I first became anorexic. I’m affected by the “new science” behind weight-loss, green smoothies, paleo, the raw food movement, skinny rules, the thousands of diet books, “inspirational” Facebook posts and Pinterest images depicting the “perfect” body.

While I don’t agree with the messages the media and film industry promote with the emphasis on thin or photo-shopped images, I think we may be missing the boat on addressing anorexia as a much deeper and complex issue than just being skinny.