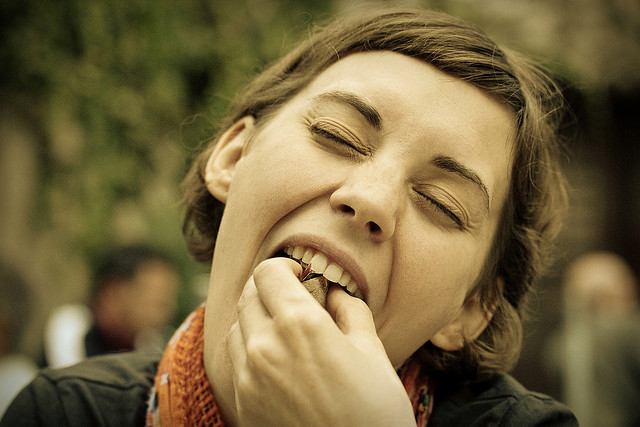 For decades I fought with myself, my body and food.

It started when I was a little girl: I stepped on my mother’s bathroom scale and decided that number was too high. I had no idea what the number meant, nor what it “should” have been, but I decided that it (read: I) wasn’t right and wasn’t enough—or that I was too much.

Having witnessed my mother and older sister on diets, I decided that if they weren’t okay as they were, I certainly wasn’t.

I spent the next three decades, dieting, bingeing, purging, restricting, fasting, exercising compulsively and then doing no exercise at all. It was exhausting. No matter how thin I got, no matter how much exercise I did, how I changed my hairstyle or what clothes I wore, I was not happy with my body, and not happy with myself.

I was chasing an unattainable goal—in fact, I didn’t even know what the goal was. I only knew it wasn’t this.

When I was 25 my world changed. I took a personal development course called More to Life. It was like the haze I’d been living in, the fog that was my monkey-mind was lifted, and I could at last see clearly. I learned that the way I viewed myself, other people, my life and the world around me, was only my interpretation. It didn’t necessarily have anything to do with reality.

In fact, mostly, it had no truth to it at all. Suddenly I had the tools to verify whether or not I really was a useless idiot with no will power and no self control.

I learned about the impact my thoughts have on how I feel and I was empowered by the idea that my thoughts were only thoughts—just because I thought them didn’t make them true.

But I wasn’t able to get off the treadmill of thoughts that I wasn’t enough. I understood that this thought wasn’t true. I could see that serial killers and rapists are enough and lovable as they are. But I couldn’t allow that to be so for me.

For another 18 more or so years, I continued to try to make myself acceptable. I did a Master’s degree in Education for Sustainability because I care about our world, and I want it to be inheritable for our children and their children. But underneath that, I did it to prove that I was enough. Doing good in the world on a grand scale would surely mean I was enough, wouldn’t it?

Still the battle of the bulge raged on. I sought support from therapists; diet doctors who took blood and promised to balance my biochemistry and fix my never-ending cravings; counselors and hypnotherapists, healers and Overeaters Anonymous…

And then one day, an old “foodie” friend called.

She’d discovered a different approach to eating that had nothing to do with dieting and restricting. It was called Intuitive Eating—where you eat when you’re hungry, stop when you’ve had enough and eat whatever you want!

Funny—my husband had been telling me this for years, but I didn’t think he knew what he was talking about! He has always been slim and he didn’t know about people like me. The rules were different for us. We couldn’t be trusted with food.

I got support and started working with this process. Things improved. I could see the diet prison for what it was: a set of externally imposed rules that disconnected me from the wisdom of my own body.

I learned to trust my body again.

I say again, but actually I didn’t have any memory of gay abandon when it came to food or my body. I was bottle-fed on a schedule from an infant—I suspect I’d disconnected from my own body’s hunger and satiety cues from birth.

I was getting to know my body: recognising and responding to its cues for hunger and fullness; doing gentle exercise for the pure enjoyment of it; and on the level of the mind and emotions: learning to recognise and ignore the Diet Police, dealing with my disempowering thoughts, learning to love and appreciate my here-and-now-body and learning to be kind and patient with myself.

Underneath a need for control lies a lack of trust—in myself, in others, in life.

I’d worked with my default drive for control through the More to Life courses; I knew it was there. I could often recognise when it was at play, and was sometimes able to let go. But it took a lot of attention and effort, and it always seemed to be something to be weary of, something that was lurking and that I had to control! (I laugh at the irony of having to control my controlling behaviour.)

Concurrently to this, I was meditating daily. Meditation had not been an easy thing for me to commit to. I’d tried it several times over the years and it was an excruciating experience. I’m an active person—an early riser, and I like to get things done.

Usually by 6:30 a.m. I’ve meditated, hung up the laundry, unloaded the dishwasher, made school lunches, got breakfast started and answered some emails.

I’m a fast mover too: I walk fast, read fast and do the washing up at lightening speed. My mother used to call me Dynamo, and “Perpetual Motion.” So you can just imagine sitting still for 20 minutes to half an hour with nothing to “do,” nothing to occupy my busy mind, would be excruciating.

I was impatient with myself. It was hard to be still. I had many demands on how the experience would be if I were doing it well. I thought I’d be transported out of this time and space into another realm; I’d feel immensely grateful and peaceful—not only during the meditation but for the rest of the day—forever!

I wouldn’t get snappy or annoyed, ever. But most of the time, my experience was more like trying to train a jumping puppy: sit… stay…. then my monkey-mind would jump and be all over the place again, and I’d need to tell it to sit… stay… and repeat, over and over again.

But I continued with it because I trusted that something was there for me.

Something did and has fundamentally changed. It didn’t happen in an instant. It happened over time because of my dedication to the practice. It happened because I show up, day after day.

And with that practice comes more peace than I’ve ever experienced before, more gratitude for all I am and all I have in my life, more compassion for myself and others to be where we are, greater ability to let go of holding on to my way, my will.

I have learned that life has a will of its own—and it is revealed to me when I stop pretending that my will must prevail.

I have learned that now is enough: however it is, it is enough.

The battle I’d been fighting dematerialised, because my enoughness and my trust in life’s unfolding have become more steady. Sometimes I need a reminder—and life is generous that way!

That’s not to say I’m a perfect eater—I’m not—I don’t even know what that is. It’s not even to say that I don’t still have my “off” days sometimes, when I eat unconsciously. I do. So do “normal” eaters. What I am saying, is that I’m at peace with that. I no longer have to be perfect, have the perfect body or eat perfectly.

It’s such a relief not to try so hard all the time.

My spiritual practice has enabled me to: make peace with my plate, to own that I’m loveable no matter what and to experience that whatever happens, I am not alone. Whatever happens, all is truly well. It’s not necessarily according to my plan or my will, but according to life’s plan, life’s will. Knowing this, accepting this, experiencing this, takes out the fight—which creates the room to be a Peaceful Eater.