Choosing the Path to Realness. I was thinking about The Velveteen Rabbit today. Have you ever read it? It’s a children’s story about being real.

So why have I brought this all up? The Velveteen Rabbit! This realness stuff!

So that was totally confusing to me. I thought

I was crazy and confused.

And since that time or maybe it was even earlier and I didn’t know it, I have chosen the path of being real.

Here is one of the quotes from The Velveteen Rabbit that got to me. I feel this quote is so appropriate for children and adults.

“Real isn’t how you are made,’ said the Skin Horse. ‘It’s a thing that happens to you. When a child loves you for a long, long time, not just to play with, but really loves you, then you become Real.’

‘Does it hurt?’ asked the Rabbit.

‘Sometimes,’ said the Skin Horse, for he was always truthful. ‘When you are Real you don’t mind being hurt.’

‘Does it happen all at once, like being wound up,’ he asked, ‘or bit by bit?’

‘It doesn’t happen all at once,’ said the Skin Horse. ‘You become. It takes a long time. That’s why it doesn’t happen often to people who break easily, or have sharp edges, or who have to be carefully kept. Generally, by the time you are Real, most of your hair has been loved off, and your eyes drop out and you get loose in the joints and very shabby. But these things don’t matter at all, because once you are Real you can’t be ugly, except to people who don’t understand.”

This quote hit me right in the heart: Wow! It’s okay to be real! Wow!

It’s okay to tell the truth!

But there is much more to it than that and I will tell you why: It sometimes feels like a shitty path, because when I began to walk in the direction of being real, being direct, telling the truth, I began to see how many people lie.

They lie all the time—sometimes in subtle ways.

Don’t get me wrong, sometimes I know I must lie in order not to devastate someone or truly hurt them.

Sometimes lying is the appropriate thing to do. But for me opening up, being vulnerable, being real, has been an ordeal and it’s not over yet.

Why has it been an ordeal? Because I didn’t realize that I would be walking around in a world of folks living in denial or of make believe.

I just wanted to be real so badly that I was willing to pay the consequences.

And there are consequences.

Imagine being open, being real in a sea full of lying. It hurts, its painful, it takes great courage and I never know what will happen next.

Does this make me better than anyone?

I’ve also learned to be alone, not to depend upon others for my salvation. I’ve learned to be discriminating on who will and won’t be in my life.

I am learning not to take things so personally including myself, and I have learned to have a wonderfully intimate relationship with myself.

I’ve also learned that when I look in the mirror I love who I see (not all the time, but most of the time.) I’ve learned how much fun I am to be with and how kind and caring I can be. I’ve also learned that I am very sensitive and can feel other people’s pain and have the ability to be compassionate with myself and others and also have the ability to know it’s their pain not mine so if I have taken it on I just let it go.

I’m speaking a lot about being real and telling the truth, but I realize I still haven’t given any specifics, so here’s an example.

One day I walked into a group of strangers. It was a new meditation class. We sat and meditated for about a half an hour and did some other exercises. Then we sat in a circle and shared our experiences.

I began sharing something very vulnerable about myself and the next thing I heard is this elderly woman commenting on what I said. Supposedly we were told in the circle we are all supposed to say “I” when we began to share. We were supposed to talk about ourselves and not comment on anyone else’s stories.

The woman making comments on what I had said never speaks about herself. So right there and then I felt this hot energy building up in me—I felt that she was basically telling me to ‘get over it’ and minimizing what had I shared with the group.

I had to make a decision: would I open my mouth and say something to her or just let it alone and allow this heated energy to travel through me and let it go?

So I decide to let it go but it kept coming back. So a few days later I called a friend who is in the same group for feedback—when I explained the situation to her she got it!

It made me realize that on this path to be real I must have discernment when it’s appropriate to speak the truth and when I should just keep my mouth shut and work it out myself. I find that if I am holding on tightly to something it’s a good idea to reach out and call a friend who doesn’t have the same kind of vested energy in a situation that I have.

With all of this honesty that I’ve been committed to in my life I also see that in online dating, many of the men that I have met are quite dishonest. Most have not worked on themselves.

Okay, say the guy has a great photo up online, then when I meet him he doesn’t even look like his photo, or he lies about his age, or in his profile he says he wants one thing, like a serious relationship and we get together and I see he wants something casual. Yikes! Another waste of time.

But I’ve learned to see through this sea of lies.

How? By being completely up front in the beginning and telling them what I want, which is a serious relationship and one that has a friendship before sex. Well, do I get rid of them real fast, but that’s a good thing for me because I am not wasting either of our time.

In walking this path to be real I have come to terms with living with uncertainty. I learned that a long time ago when I took a workshop with Buddhist nun and revered teacher Pema Chodron. When sitting in a private session with her during this workshop she looked at me and said “Sherri, I think you are now ready to live with uncertainty!”

And I said “yes, I think you are right!” It opened up a whole new world for me.

As I am writing this piece I believe I realize that the path to becoming real has chosen me and I know that this is the only way I can live with who I am. It isn’t easy and like I said it feels shitty at times, but I couldn’t do life any other way.

How about you? Have you made any choices about your life? Any choice about being real? 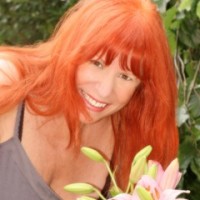