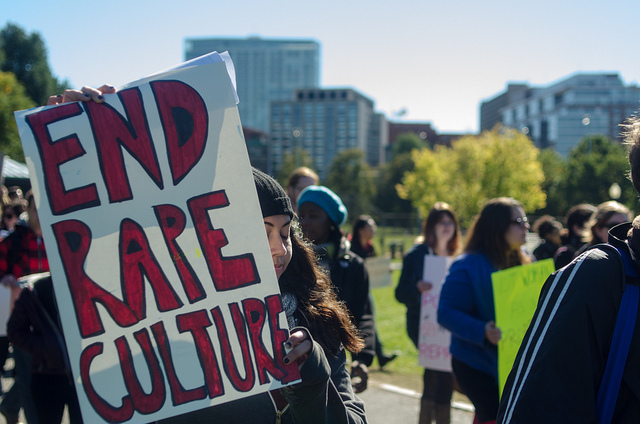 Another day, another accusation against a famous, beloved public figure.

As someone who follows the news and celebrity entertainment, it would be impossible to miss this story even if I tried. As a survivor of sexual assault, there is another reason why stories like the Bill Cosby case and stories involving rapes on famous college campuses catch my attention and that is there is an overwhelming unwillingness by many in our society to believe victims.

It’s something I have noticed time and again on various chatboards, in conversations with friends and my own firsthand experiences as someone who was brutally assaulted as a tween.

Granted, not all sexual assault accusations are true. False rape accusations are a problem, but even though exact numbers are hard to come by, the evidence suggests the vast majority of people claiming to have been raped are telling the truth.

While some claim that no one should make judgement outside of a court where evidence determines someone’s guilt or innocence, even when someone admits to rape or is found guilty, victims may have a hard time being believed. (Think of the Roman Polanski case from the 1970s and the infamous comments by Whoopi Goldberg five years ago that Polanski was not guilty of “rape-rape”.)

Speaking as someone who was only a year younger than Polanski’s victim when my own sexual assault occurred, I know better than most about some of the myths that surround rape victims.

One of the biggest is that most people who make accusations are overwhelmingly believed and supported. As my own experience showed as well as that of several other survivors I have met and spoken to over the years, that is not true.

Growing up on after-school specials and “special” TV episodes of my favorite sitcoms that dealt with the subject, I really did expect nothing but support when I finally told my family the big secret I had been keeping for over a year. I was expecting to be swept up in my mother’s arms and reassured that nothing was my fault. However, none of those things happened at all.

I was assaulted by an extended family member—someone who had an overall reputation within the family as a “nice guy.” I was immediately asked if I was sure what I had claimed had happened. Could I have been confused? Could I have mixed up fact with fiction or worse, was I just a liar looking for attention?

Support didn’t come from my peers either.

When I confided in some friends who swore they would keep it a secret but did not, I found myself being teased, taunted and called a liar by many.

While it could be argued that the experiences of a 12 year old do not compare to that of an adult, the truth is many adult victims I have met also confided that they were victims of harassment or told outright that they were lying.

Part of this has to do with the fact that with rare exceptions, most people who commit sexual assault are not the monsters we envision them to be.

Many are “regular,” nice types who have families, participate in the community and seem trustworthy. While there is no denying the trauma that the victims feel, there is also a degree of trauma that the friends and family of these people feel upon learning that their loved one is not who they think they are.

It’s natural to be in denial—at least at first—but some people utterly refuse to ever even entertain the idea that someone they thought they knew so well could be capable of such a heinous action. (In the case of celebrities, the denial factor may be even higher because the public often wants to believe they really can know someone through the persona of TV, movies or interviews.)

Then there is the fact that victims—much like everyone else alive—aren’t perfect.

Looking back at my 12 year old self, I was generally thought of as a nice, quiet kid, but like any kid that age, I could be bratty and surly, especially when it came to interacting with my mother. Sometimes I wasn’t very nice either.

By the time we get to be adults, usually everyone can be torn apart in some way if they are scrutinized enough under the microscope. While justice is supposed to be blind, the truth is, it is not.

One of the most interesting things that I picked up upon in discussions about Dennis Radar AKA the BTK Killer is how he did not fit the classic serial killer stereotype because he did not prey on prostitutes. It’s common knowledge amongst criminologists that the majority of serial killers and serial rapists overwhelming chose sex workers as their victims because they are less likely to ever go to the police on the basis that no one would believe them.

However, one doesn’t have to have been a prostitute to have their reputation savaged. It’s not uncommon for victims whose cases actually make it to court to say that they felt like the ones on trial. With everything in mind, it’s little surprise then the vast majority of rapes and sexual assaults go unreported.

Recently, there has been a lot of discussion on how to transform the “rape culture” we live in and ways to help those who have been victims of such crimes.

The first step is to actually believe victims when they choose to come forward or at the very least, hear what they have to say in their entirety before doubting them or questioning if that’s what “really” happened.

“Rape is rape” is an often repeated slogan, but it’s about time we start to believe that, as opposed to just saying it. Rape and sexual assault is everyone’s problem whether we are male, female, gay or straight.

The sooner we stop blaming victims and make it easier for them to come forward with their stories, the sooner we will come to actually stopping rape culture.