Love Notes from the Universe. There are these moments of grace that remind us we are loved.

Even the most blessed among us inevitably have times when we feel absolutely overwhelmed with the challenges that face us. We slog through, doing the best we can, but sometimes we may feel we are hanging on by a mere thread.

Two Decembers ago, in the midst of an emotionally exhausting time, I received just such a love note from the Universe.

That winter I was completely immersed in caring for my father. He was newly adjusting to being in a nursing home. We had kept him home as long as we possibly could, but his Alzheimer’s was getting much worse and the caregivers, as well as each of my siblings and I, were struggling with the effort of caring for both parents, while simultaneously taking care of a host of household chores.

Dad, this wonderful, laughing, loving man who had very capably supported and loved a wife and five children, who had been a widely respected elder in two different churches, who was known for his teasing, his practical jokes and his good humor, was gradually losing his faculties.

I had been absolutely heartbroken that we had acquiesced to this nursing home solution. My one sister and I had been the holdouts. We wanted to keep dad at home longer still. But that option no longer seemed to be viable. Not only was he deteriorating more quickly, but the funds to pay for the 24-hour-a-day caregivers, as well as all the other myriad expenses involved in maintaining my parents’ home, were disappearing fast. It seemed we had no choice.

There was a floor at this nursing home allocated for those with memory problems and those at risk of wandering. This was where dad would live, in a room with three other men, two of whom called out relentlessly, asking for help even when none was needed. It was good we had found a place where dad would be safe. But I was also sad because he had regular periods of lucidity and on this floor he was surrounded by what, no doubt, appeared to him to be a bunch of crazies.

I hated for this proud and wonderful man to be there.

And so I spent time with him every day. I visited daily, usually staying three or four hours at a time, then trying to find time and energy for quality time with mom who was still living in the family home. I was absolutely exhausted, but I could not bear not to visit dad.

One day, a couple weeks after he had moved in, in spite of an alarm which went off whenever he got up from his bed, dad had found his way into the bathroom where, unsteady, he had fallen and hit his head.

We made the gut-wrenching decision to put him on hospice care.

Now that he was even less capable of caring for himself, of speaking up for himself, I came earlier and earlier in the day. I woke up worried about dad.

Were they treating him right?  Were they getting him to the bathroom when he needed to go? Were they giving him enough to drink? Was he comfortable?

I began arriving around eight in the morning, sometimes even earlier. My immediate concerns were for his physical and emotional comfort. Oftentimes there was nothing for him to drink when he was thirsty—his drinks had to be thickened so he wouldn’t choke—or he would have to go to the bathroom and no one would be responding to his calls.

So I became the pesky daughter who would interrupt any passing aide or nurse politely asking for assistance.

One morning, my requests apparently became too much. The registered nurse in charge of the floor—a top notch nurse, very caring, respectful and professional—lost her temper with me. “What time is it, Cindy?  What time is it?” she demanded.

What she meant, I knew, was that it was still early in the day and each staff member had their hands full getting all the residents fed their breakfast and up and washed and dressed for the day.

I knew this because I had once been one of them. When I was a teenager, I had been a nurse’s aide in a nursing home. I knew firsthand how difficult the work was. I knew that she was right. I knew I was there too early to begin my pestering.

But at the same time I couldn’t bear for my beloved father to be in discomfort.

I fled. I hurried to the elevator, stumbled teary-eyed through the reception area and practically ran down the steps into the cold December air.

I walked for several blocks feeling a hundred emotions—sorrow, shame, despair, hopelessness, exhaustion, love. Everything tumbled around inside my fragile heart. Tears slipped down my face as I walked, head hanging, down the shoveled sidewalks of town, past small piles of snow, large trees, parked cars.

Then I saw it. There at the edge of a sidewalk, carved in melted ice, was a perfect heart. 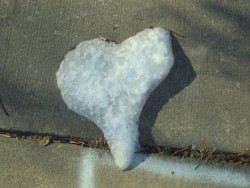 I stopped in my tracks and stared in wonder. I felt my heart starting to lift. I knew it was the Universe telling me I was loved. In the midst of this massive love I felt for my father, in the midst of all my exhaustion, all my trying, all my human frailty, I was loved.

I smiled through my tears and made my way back to the nursing home where I left a note of apology for the nurse. I was too embarrassed to show my face right then. Plus I didn’t know how to be with dad without addressing his needs. How could I sit idly by and not get help when he needed it? Not having an answer, I simply left.I realized I needed to trust dad to their care that day.

For this one day at least, I gave myself permission to not be his savior.

The next day when I arrived, I apologized profusely to Mary just as she began apologizing to me. She said to me, “You’re a wonderful daughter. You’re a wonderful daughter.” Just as I knew and appreciated how hard she worked, she knew and appreciated how hard I loved. We both respected one another and we had both come to a breaking point. But it didn’t mean either of us was “bad”. In fact, we were both “good”. We each did what we could. We each gave our all.

What I learned that day was that there is a spirit of love in the world. There is pain and turmoil and challenge but there is also love. And because I sometimes forget, I was sent an angelic reminder in the form of that beautiful frozen heart.

That image will always remain with me as a reminder that I am loved.

Flaws and all, I am loved.

Awareness of Grace: The Master Conductor of the Universe. 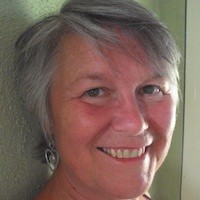