Help! There’s a Teenager in my Yoga Class. 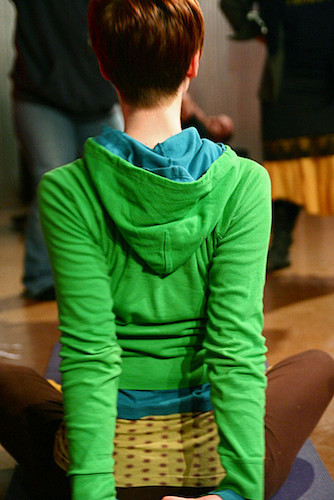 As the mother of a college student, I’ve learned a lot about how and when to interact with a teenager.

Along the way, I’ve also learned several important things about teenagers themselves.

My favorite teenager-in-yoga-class moment happened when one of my regular students decided to bring her daughter.

As the mother came in and signed them both into class, the daughter stayed outside and talked on her phone. Mom was patient. She laid down a mat for both of them. At the last moment, after I had closed the door to begin class, the daughter entered the room, opening the door and closing it again behind her, announcing her arrival in the way that teenagers are prone to do.

What followed was the most hilarious hour of yoga I have ever taught: audible sighs, eye rolling, tadasana with one hip out to the side in defiance, angry stares. If I wasn’t the mother of a teenager, I probably would have left the room in tears.

Instead, I could barely hold back the laughter.

Here’s what you should know about teenagers: they are human, they are struggling, they are beautiful. Don’t be scared when they enter your class. Look at them. Appreciate them. And remember the following facts:

1. They are all trying so hard to find themselves.

Not find themselves in a spiritual sense, but to figure out who they are and how they fit into the world. Are they the sullen goth, arty type? Are they the perky cheerleader? The athlete? The beauty queen? The academic? They set these categories themselves. They define the boundaries and then they try to fit themselves into them. I remember when my daughter decided she would be the tough tomboy. As a little girl, she loved dresses and pretty things. She was the ultimate ‘girly-girl.’

Then she decided to define herself as something else. And then she said to me one day, a junior in high school, “I can’t wait to go to college so I can wear dresses.” Recognize that they may have boxed themselves in somewhere and are not necessarily the costume you see in front of you. Work hard to see them.

2. They often really can’t control their hormones and mood swings.

This recognition stems directly from dealing with my daughter. After screaming bouts that left both of us in tears, I realized that I was the one capable of controlling my emotions (and thus, the situation). Yoga teaches us to breathe. It teaches us to have grace in difficult situations. It teaches us equanimity and compassion. And when a teenager has begun to unravel in front of you, you can call on all of these tools.

You are in control. Instead of anger or resentment, you can call upon love and understanding. Whatever they are experiencing will pass. And they will remember that you held yourself together as they melted down. They will feel safety, gratefulness and love for your strength. And they will learn that skill and remember it when they are older and have their own teenagers. This is how the world works.

3. They secretly want to please you.

They really do. Nurture them. Encourage them. Give them strength and dignity. Show them their own beauty.

They are easily crushed. Speak carefully and kindly. I still remember offhand remarks directed at me as a teenager. I remember how those words made me feel. I remember how those words shaped the person I am today. I remember the messages, subtle and not so subtle, from the women in my life. Messages that told me that I was too fat. And because I was too fat, I was not good enough. You may think that teenagers aren’t listening to you, but they are. They are listening carefully and your words are powerful.

Most of them will all turn out okay…even the ones who you think are destined for jail. Or a mental institution. They will continue to grow older and wiser, just like the rest of us. Just as you will be a wiser person in five years, so will they. Be patient. Give them space and allow them to flourish. And be continually grateful for the light that they bring to the world.

Teaching Yoga to Young People, Stepping into the Essence. 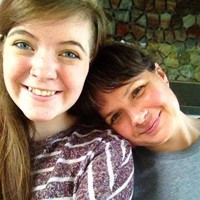