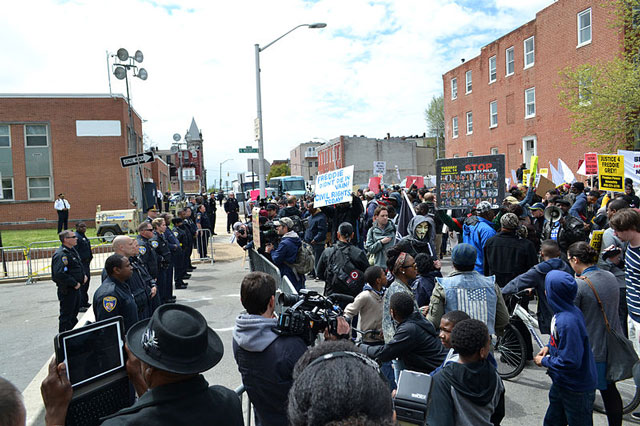 Update: Friday, May 1st: BBC is reporting that: Baltimore’s top prosecutor says Freddie Gray’s death in US police custody was a homicide.

Baltimore’s top prosecutor says she plans to file criminal charges against six police officers over the death of Freddie Gray.

State prosecutor Marilyn Mosby said the death of the 25-year-old black man was a homicide, and his arrest had been illegal.

As she made the announcement at a press conference, protesters cheered loudly, briefly interrupting her remarks.

Looting, clashes between police and civilians (where bricks were thrown by both sides) and skirmishes between rioters and neighbors, protecting shops, left fires burning, police cars destroyed, dozens arrested and at least a dozen officers injured. And it’s not over.

A state of emergency has officially been declared, along with a curfew. The governor has sent 500 state troopers to Baltimore and requested up to 5,000 officers from other states.

Freddie Gray, age 25, died on April 19th after sustaining a fatal spinal injury during his arrest by Baltimore police. The riots on Monday mark a departure from the initially peaceful protests following his death.

Naturally, responses to these tactics have been divided between those condemning the violence—self-destructive in many respects—and those claiming that anything else would be complacence.

Coming from the privileged class of people who have always felt protected by the police, I do not presume to fully comprehend the feelings of those involved in the Baltimore riots and other similar incidents in recent news.

Though I consider myself a staunch advocate of non-violent protest, I don’t know what it feels like to have a family member or neighbor brutality victimized by police. I can’t say with absolute certainty that I would feel so inclined to peace if these threats formed a part of my daily experience.

I believe that the reality surrounding the current situation in Baltimore might be too complex, too replete with senseless brutality and injustice, anger and inequality, to take a hard line on one side or the other of non-violence.

These are the two perspectives I have found most compelling. I think all of us would be well served to consider them (and others) fully, without indulging the impulse to immediately respond.

David Simon, creator of the hit TV series “The Wire” and former Baltimore Sun reporter, posted a plea for peace to his blog on Monday. He writes:

“…this moment, as inevitable as it has sometimes seemed, can still, in the end, prove transformational, if not redemptive for our city. Changes are necessary and voices need to be heard.  All of that is true and all of that is still possible, despite what is now loose in the streets.

But now—in this moment—the anger and the selfishness and the brutality of those, claiming the right to violence in Freddie Gray’s name, needs to cease. There was real power and potential in the peaceful protests that spoke in Mr. Gray’s name initially and there was real unity at his homegoing today. But this, now, in the streets, is an affront to that man’s memory and a dimunition of the absolute moral lesson that underlies his unnecessary death.”

Simon’s voice has emerged as a powerful champion for non-violence, quoted repeatedly in media coverage of the riots. He concludes, “Turn around. Go home. Please.” Many agree with him and have been calling for the violence to cease.

Many, however, do not, and Ta-Nehisi Coates, Baltimore native and correspondent at the Atlantic, has probably expressed their perspective loudest and most persuasively. He writes:

“…tonight, I turn on the news and I see politicians calling for young people in Baltimore to remain peaceful and “nonviolent.” These well-intended pleas strike me as the right answer to the wrong question. To understand the question, it’s worth remembering what, specifically, happened to Freddie Gray. An officer made eye contact with Gray. Gray, for unknown reasons, ran. The officer and his colleagues then detained Gray. They found him in possession of a switchblade. They arrested him while he yelled in pain. And then, within an hour, his spine was mostly severed. A week later, he was dead. What specifically was the crime here? What particular threat did Freddie Gray pose? Why is mere eye contact and then running worthy of detention at the hands of the state? Why is Freddie Gray dead?

Before I decide that violent protest is never warranted or that non-violence is always “right,” I plan to read these words many times over and think about how much I don’t know about the conditions that lead to both perspectives.

So I don’t know where I stand, but I can read and think and share.