I Quit Yoga to Discover the Perfect Practice. 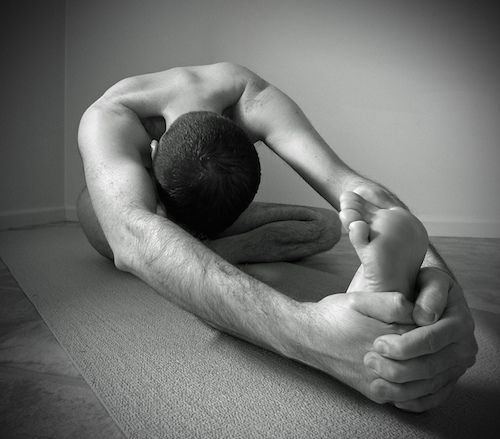 About a year ago, I walked away from yoga defeated and disappointed.

Here’s how I learned to see those feelings not as the boundaries of my relationship with yoga, but as doorways to deeper practice.

For most of my life, I was uncomfortable in my body.

I didn’t play sports or exercise much. I didn’t dress well or pay attention to my diet. I chose jobs, hobbies and relationships based on intellect rather than physicality. It was a safe and easy way to live, but I felt unbalanced and incomplete. I didn’t want to hide inside my mind forever.

Something had to change.

So, six years ago, I walked into a yoga studio looking for a new way to inhabit my body.

I felt timid and self-conscious at first, surrounded by toned, athletic people who could do outrageous things with their bodies without breaking a sweat. But I sensed from a very deep place that this path had something to teach me, and I was determined to follow it as far as I could.

With consistent, sustained effort, I began to make what I called progress.

I was doing things I would never have believed myself capable of. My balance, my stamina and my mental outlook all improved in real, measurable ways. I lost sixty pounds.

Yoga was changing my life.

That serene, blissful feeling I’d take with me after a good class left little doubt that I was on the right track.

Of course I didn’t always get that feeling. Sometimes, it was actually pretty terrible.

When I’d lose my balance repeatedly during class; when I’d run out of steam halfway through; when I couldn’t get into a pose I’d managed just fine last week, dammit…whenever I had expectations of myself that I couldn’t meet, I’d go home feeling deflated and depressed.

But it’s all part of the deal, right?

Everybody who practices seriously knows that sometimes, you just have a bad class.

And when that happens, what do you do?

You om, you namaste, and you move on. You’ll do better next time.

Except… sometimes you don’t.

My good classes started spreading out further between, while my bad ones began piling up. I felt like I had hit some kind of yogic wall.

“It’s been four years! Shouldn’t I be able to do a handstand without the wall by now?”

After having made so much progress, to stop “improving” felt like I was moving backwards.

I started experimenting with different strategies to turn my practice around.

“What if I drink a cup of coffee an hour before class? How about two hours? Maybe I should sleep more…or less? Ooh, a sattvic diet! That ought to help, right?”

I spent about a year chasing that “good class” feeling. Nothing worked. With the sad realization that I was doing myself more harm than good, I walked away, without knowing if I’d ever be back.

I didn’t feel the need to make a dramatic exit. I just stopped attending classes.

I got exercise in other ways, like bike riding and skiing. But they only replaced part of what I got from yoga.

For the rest, I turned to something that yoga had introduced to my life as a kind of “side dish” to physical practice—meditation, the observation of everything exactly as it is, without the mind getting in the way, starting with the breath.

A lot has happened since my last class. I’ve traveled. I’ve studied. I’ve spent many silent hours with my eyes gently shut, observing my breath, and here’s what I’ve learned.

How many times in the last six years have my teachers reminded me, in plain English, that yoga means finding balance between effort and ease? Accepting whatever arises without judgement? Leaving the ego outside, offering the fruits of your practice for the benefit of all beings everywhere?

Because for all the disguises I draped over it, I was still practicing for the enrichment of my ego.

I failed to recognize my power, my strength and my beauty.

I thought I was weak and ugly, and I wanted yoga to change that. There was no way I could sincerely offer up the benefit of my practice to others. I was convinced I needed it all for myself.

I had to get some distance from my practice and observe it objectively in order to see that yoga was never my problem. It was this sense of unworthiness, of not being enough. That was my problem.

We have to love ourselves.

There’s no substitute for that. Not talent, not beauty, not intelligence. Not our social roles, not our relationships. Not holding chair pose for ten minutes, or transitioning into a perfect Bird of Paradise every time.

Maybe yoga had to drive me away to teach me this, only to bring me back when I was ready to learn more.

So, I’m going back to yoga.

But this time, I won’t be comparing myself to anybody. My practice is my own, and it’s none of my business what anybody else can or can’t do.

Nor will I set time limits. Getting into this or that posture will take me as long as it takes, and that’s it.

All I have to do in yoga is my best, and to do it without judgment.

And as for meditation, the totally honest observation of what is, it’s not a “side dish” to the practice. It is the practice.

Tomorrow, I step back onto my mat for the first time, stronger, wiser and ever more grateful—not just for what I can do, but for who I am.