My Favorite Story is Written on My Skin. 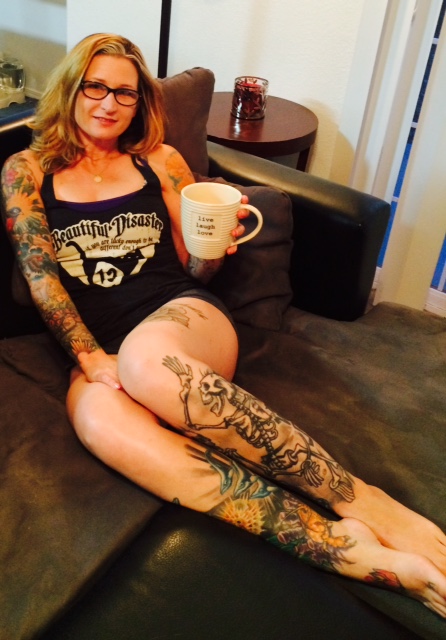 It’s true, my favorite story is written on my skin, but I didn’t write it. I lived it.

When I started getting tattooed, I didn’t realize that that the images I chose to permanently ink into my skin would one day come to be a visual timeline of love, mindfulness, accomplishment, loss and grief.

I started out a Doc Marten wearing, Gen X slacker with a love of punk rock music and all things that cried rebellion.

Besides, they looked cool.

My 18-year-old self chose a small tribal dolphin, tattooed on my ankle by my boyfriend (his first tattoo), to begin my adventure. Yeah, I said tribal dolphin—it was the 90s, give me a break.

Over the next few years, I obtained four more tattoos on a whim. None of them had a deep meaning, but I looked tough.

I returned to the tattoo community nearly a decade, one husband and two children, later. It was then that I began my journey into “big” tattoos, when I received an ankle-to-knee ocean scene representing my childhood in Southern California and my love of the ocean. The main goal of this tattoo was to cover some of the tattoos from my youth, and the troubled memories of that time.

I fell in love with this tattoo and embarked upon a tattoo adventure, which left my back, side, other leg and right arm a vivid artistic representation of a period of extreme change in my life. The loss of my Grandfather, my graduation from college, sweet moments of my children’s childhood, my divorce and the reclaiming of myself can all be found on my skin—all depicted by artists who not only listened to my meaning and ideas, but represented them in far more beauty on my skin than I could have imagined.

At a certain point, I crossed the line between having a tattoo and being tattooed. The stares, questions and dirty looks became a daily part of life. Particularly when the cultural view of tattooed people conflicted with the image of a mom playing hide and seek with her kids at the park. Thick skin was (and is) required.

As a History major, I began to dig deeper into the development of American cultural attitudes toward tattooing, and especially women with tattoos.

Tattooing has been present in the archaeological record for over 5,000 years and symbolizes spiritual growth and connection in many cultures around the world.

So, how exactly had we come to see them in such a negative light?

After Captain James. T. Cook brought knowledge of tattooing to the Western world from the Polynesian Islands in the 1770s, tattooing became popular in the U.S. among workers, law enforcement and military.

Criminals were tattooed so they could be easily identified as multiple offenders and blue-collar workers were often marked according to their professions. Carnival sideshows that showcased tattooed “savages” introduced tattooing to the upper class, and the circus sideshow (freak show) later became a living for many tattooed entertainers. P.T. Barnum made big business out of the invention of the tattooed sideshow, which traveled Europe and the United States. (1)

A small number of women became involved in the sideshow circuit as bearded ladies, psychics and tattooed ladies.  These women experienced an unusual economic independence (they were paid an equal wage to that of their male counterparts) by working on the sideshow circuit. (2) Mainstream society may have accepted tattooing as acceptable for male workers, servicemen and criminals, but women who participated in tattooing were considered to be prostitutes or “loose women.”

In the U.S., tattoos had become of a symbol of the lower class. Criminals, sailors and easy women had tattoos, not solid Christian members of the middle class. This label persists today, despite the popularization of tattoos as a trendy symbol of Generation X and the celebrity of Kat Von D and other artists on television.

Over the years, I have found more acceptance of my tattoos, although judgment still exists. Mostly, people have a lot of questions about them, want to touch them to see if they feel like real skin, want to know if they mean anything, and always, if they hurt.

Even if I wanted to, I could not answer these questions with any real honesty while standing in line at the grocery store with two cranky children in tow.

How could I explain that my tattoos, while they individually represent an important person or event in my life, as a whole they are my daily reminder of my entire journey.

They are a reminder of lessons learned, of the person I was, am, and am trying to be.

They are a reminder of love and loss, no longer piercing my heart, but emblazoned on my skin with beauty. They are a reminder of my friends within the tattoo community who helped me create beauty in my story, and always provided a respectful and highly entertaining environment to spend an afternoon in.

They are a reminder of the need for meditation and breath in even the most painful moments. Why? Because tattoos hurt, and the only way through them is to take a deep breathe and relax. Just like life. 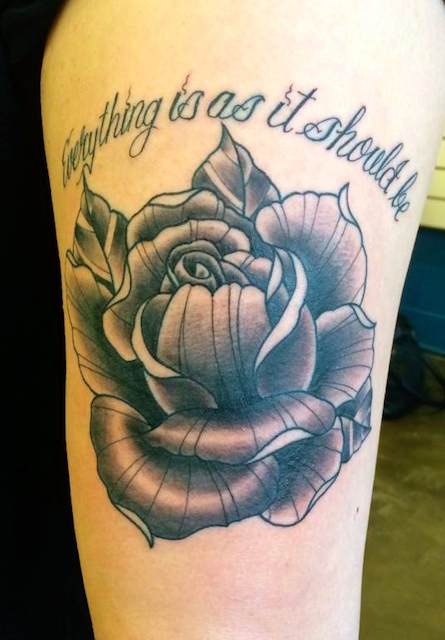 I am a writer, a lover of words, and most definitely a lover of a good story. When I look at my tattoos, I see my story in more vivid artistic beauty than I could ever put words to.

I love that people with tattoos are willing to boldly claim their story. Sometimes those stories are beautiful and bring connection. Sometimes that story is that they are an asshole. If you display images of swastikas and pentagrams, people might think twice about approaching you. Stereotypes exist for a reason, and the fact is that tattoos are common among gang members, bikers and ex-cons. However, I would urge caution in judging someone based solely on their tattoos.

We never know where someone else is in their story.

For me, I can’t wait to see where my story goes. 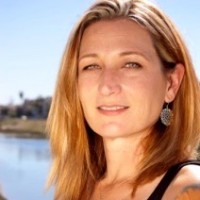