Simple Advice on What to do When Doubt & Panic Set In. 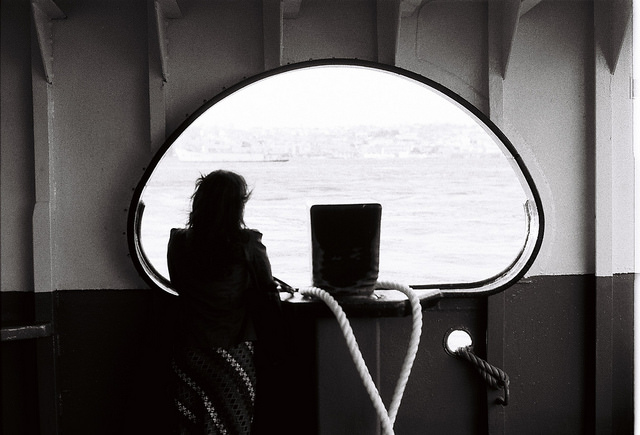 I’m not much of a sailor.

That’s putting it mildly. I’m no sailor at all. It’s not boats that I don’t like—it’s the water. I can’t swim. If I ever get on a boat, I spend most of my time sitting safely inside staring at the water with terror, thinking about what it would be like to be in the water instead of on it.

Mostly, I stay away from boats.

However, I was on a sailboat once. And it changed my life.

It was in the midst of a terrific heat wave while I was visiting my Yankee girlfriend who lived on Narragansett Bay in Rhode Island. She convinced me to go out on her sailboat with her and her friend Jack.

“Come on,” she coaxed. “We’re in the middle of a heat wave. I promise you. We won’t sail around we’ll just go out and put down the anchor and float.”

What could I say?

They dug up the ugliest orange life-vest I’d ever seen and told me to wear it when I got on the boat. I mixed up some tuna fish mixed with olive oil and fresh garlic and parsley and crammed it down into big crunchy rolls with thick slices of tomatoes, packed a big bottle of wine and closed my eyes so I couldn’t see what I was really doing.

It was kinda nice out there on the water if I could forget that I could drown at any second. It was even kind of nice when the weather on land was muggy and sweaty and on the water it was cool and refreshing and like being rocked in a cradle. Kinda.

“Put your hands here and here,” he showed me.

I don’t remember how, but he managed to get me to move from the little spot in the point of the boat that I was glued to up to the big wheel he used to steer it with.

“I’m gonna show you how to steer this boat.”

He was a big boned, six foot tall, blue-eyed Irishman. Strong looking, with the crinkly-eyed smile of an experienced sailor.

Standing behind me, he reached his arms around me so that he had each one of his big, could-hold-a-football-sized hands over the top of each one of my white-knuckled little ones and together we took hold of the wheel.

Then we just stood there, him surrounding me. Me, feeling—strange.

Didn’t this big guy know that there were no white lines painted out there to follow on that big bay? Didn’t he know that I didn’t know how to steer a sailboat and that it all looked like one big indiscernible space to me? Didn’t he know that if he let go of me my knees would give out and I would probably collapse?

I guess he didn’t. Because that’s when he leaned down and put his cheek next to mine and spoke directly into my ear.

“See?” he said, “You know how to steer a sailboat. You just didn’t know you knew.”

He raised his arm and with his index finger pointing into the space in front of us, told me to find a spot out there on the horizon—to fix my eye on it—and steer the boat toward it.

The sun had started to go down and it was taking the breezes down with it. The water had smoothed out and changed color and somebody turned on the lights around the lazy edge of the bay. I searched the horizon for some kind of “spot” and finally fixed my eye on what appeared to be a steadily glowing blue light. It was the only thing I could really discern through all the other lights, not to mention through my doubt and fear.

I fixed my eye on that steady blue light just like Jack said. You can bet I didn’t take my eye off it, my life depended on it, and I kept the point of the boat headed toward it. Jack moved away and soon, soon….

…with the intensity that focus and concentration can bring, a moment came when everything but that blue light fell away. My fear fell away. My anxiety fell away. All that was left was me and the blue light, the gentle water, the gentle breeze and the gentle voice of Ella Fitzgerald coming from the radio singing a great old song.

“For all we know, we may never meet again.”

Then, came another moment. A moment of surrender, when it was no longer me steering the boat toward the blue light, but it was the blue light pulling me toward it.

I’ve never forgotten my sailboat moment and the lesson that all I had to do was to keep my eye on the blue light—and surrender to it.

Although I’ve never sailed again, I doubt learning to sail was the reason I was put on that little boat in the middle of Narragansett Bay in the first place. I think the reason was so that when I was panicked or afraid I could learn to find all the blue lights in my life and learn that when I kept my eye on that one thing in particular, fear, anxiety, panic and doubt would go away and in the end, I wouldn’t even have to be the one steering my life toward the blue light. The blue light would take over and be the one pulling me toward it.

“Just keep your eye on a spot on the horizon,” Jack had said, “and point the boat toward it.”