Cheryl Strayed Set Me “Straight” on Rainbowing My Facebook Profile Pic (& How to Change Yours). 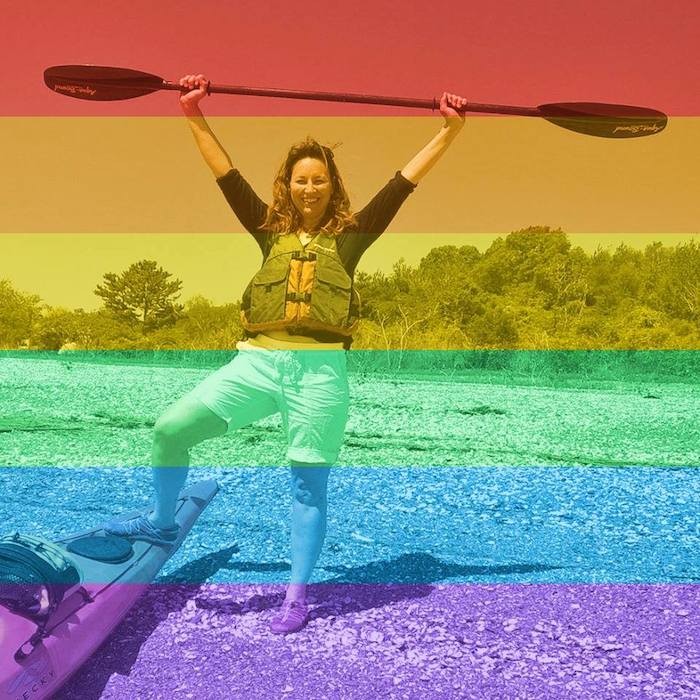 I was on Cheryl Strayed’s Facebook page and noticed her new rainbow profile picture. It was changed last night.

It’s no surprise she supports marriage equality; after all, she’s brutally honest in love and in writing about owning all we are. She’s the voice behind the book Tiny Beautiful Things:

“The whole deal about loving truly and for real and with all you’ve got has everything to do with letting those we love see what made us.”

I was not surprised that she supports marriage equality and truth-being as well as truth-telling, but I was surprised she bought into a Facebook-created fad—after all, doesn’t Mark Zuckerberg have enough influence on us all?

Strayed is usually so fierce, independent and unconventional. She’s the author of Wild (yes, the one the movie was based on). She’s been on Super Soul Sunday with Oprah. She does her Dear Sugar column on radio now with Steve Almond on NPR and can be seen in many Instagram photos with Laura Dern and Reese Witherspoon.

Why is she changing her profile photo? I wondered.

Okay, it was snarkier than that: I didn’t really ask, I judged.

I’ve been doing a lot of eye-roll judging in the last 48 hours as people in my own Facebook newsfeed are adding a rainbow filter to their profile pictures.

I don’t like the move. It seems too easy.

Because I try to act mature, sometimes I did not say what I was thinking.

“Isn’t this a little easy now that the Supreme Court has made marriage equality law?”

“Where were you with your rainbow flag when it was collect signatures and change the status quo time?”

“You can’t crash the pride wedding when you didn’t help plan or pay for it or even RSVP when invited.”

Those were my feelings and thoughts.

I did not think I got to or others should get to attend and act all jubilant now that it is a moment of celebration. Doesn’t that below to the LGBT community alone?

That’s what I thought.

Then I read the comments under Strayed’s profile from her fans.

Sure, some bozo asked if she’s bi as soon as she made a rainbow profile. (Dude, it’s an author fan page—read her writing.)

Some stated their opposition to the rainbow in favor of their old-fashioned values. No one argued but just left it alone. Many gays and lesbians made a point of saying thank you to Strayed. Some expressed how touched they were by her profile picture change and how it made them feel joyful, seen and supported.

It’s not about if it makes me feel too much like I’m following a pop trend.

Can I be and show love in this way?

Can I humble myself and be all trendy if it makes people who have been marginalized feel even one drop more loved and seen?

Can I go outside of my comfort zone requiring me to figure out some app thing and then to do something “everyone is doing?”

Will I even ditch my stick-in-the mud-contrarian-and a little afraid of apps and technology ways if even one person can more easily recognize me as an ally?

I stand with the masses to support those that haven’t been accepted, seen, celebrated or given access to the same laws. I do so because the fight is not over and there are still people who might lose jobs, friends, family, faith connections for being who they are. I do so because the rate of suicide and addiction and depression and anxiety is still too high for LGBT teens and adults.

It’s not about how I think or feel or if I’m questioned like Strayed was for being trendy or bi. It’s about showing those in the LGBT community, clearly, I am an ally and you can count on my support going forward too and not just during this celebratory time.

My profile has been changed. My heart and mind have been too.

I’ll give Cheryl Strayed the last word again (from Tiny Beautiful Things) and dedicate to the LGBT community who has been persecuted too long:

“Something ugly happened to you and you didn’t let it make you ugly. I salute you for your courage and grace.”

It is really this simple, I promise!

1. From anywhere in Facebook, go to the search bar (top left by Facebook F icon) and type in: “Let’s Celebrate Pride.”


2. You will be brought to a page with a faded rainbow at the top.
Press down on the “Use as Profile Picture” button (in blue underneath the rainbow).

You don’t have to load a photo or do anything here with your photo. It will put the rainbow filter over your existing Facebook profile.