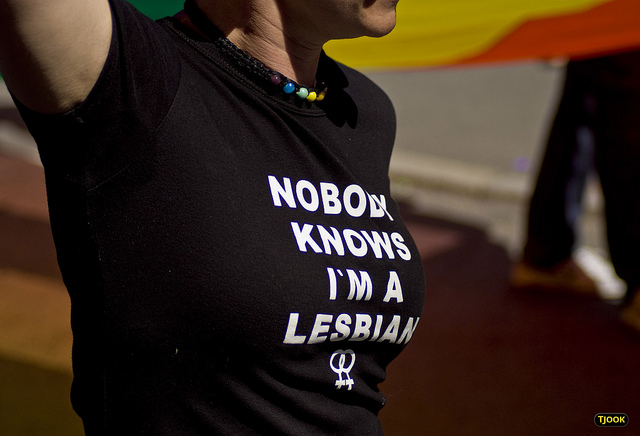 I had a secret. Something that I never told a soul. My first kiss was not with a boy, but a girl.

I wasn’t supposed to kiss girls, let alone desire them in that way. I was only allowed to be attracted to boys, for some day I would grow up and marry a boy and we would have a house full of children, just as God intended.

I had absorbed that belief in my indoctrination classes at church since infancy.

Contrary to those teachings, I developed a crush on a girl in high school. I didn’t even have a word for what that experience meant for me, so I just believed that I was her friend and enjoyed being around her.

I remember her long dark hair, the smell of sunshine on her skin and how I would be filled with nervous butterflies every time I was around her. She was beautiful and funny, and I learned so many things about life from her. I didn’t even understand that I had fallen in love with her, for if the frame of reference wasn’t available, how could I have put words to what had happened?

Filled with horrific shame and the fear of discovery, I tucked that away inside me, never to tell a soul, and continued to live my life in the correct way.

Determined to be the most righteous person I could become, I threw myself into everything I did with gusto. I followed the script that was laid out before me—marriage, children and family—long before I was prepared or ready to be an adult.

I was equally attracted to men, fell in love with and married a man and enjoyed my married sexual life, so confusion reigned over my high school experience.

Was it a phase? A slip-up? Something that would never be repeated again?

Who would understand the attraction and the longing? How could I even begin to explain it?

Who could make sense of a woman desiring another woman? Of course society might be able to, but the world was an evil place—a real Sodom and Gomorrah. So while I would find sympathy from strangers, those who mattered to me would never understand.

For them it would be explained away as something dirty, ugly and sinful. A temptation of the devil and not natural.

So, I was dirty, evil and sinful—not natural.

I decided never to reveal my shameful secret and kept it safely tucked inside the dark parts of my soul where it belonged. I told myself that I appreciated women’s beauty, and any attraction I felt would be pushed aside.

Then, one day the cognitive dissonance became too difficult a burden to carry in my heart.

So, I gave myself permission to ask the question: Was it true?

Questions and curiosity had always been permitted, though only within the religious structure that was set forth. To allow myself to embrace other possibilities was to open Pandora’s box.

Did someone own the rights to truth? Was there really only one truth?

Did a religious organization or society hold the key to all my answers? Or was it found within me?

Finally, I burst forth out of my cocoon and my wings spread as I discovered that the teachings that had been ingrained since childhood were no longer true for me.

Instead of absolute certainty, I found comfort in my inability to answer every question, for I began to see that a final and absolute answer could not be sought for the wonderings of my soul.

This discovery led to a freedom in my mind and heart. That my life would be filled with a constant desire and thirst for knowledge and doubt was not to be feared, but embraced.

The world became a more beautiful and accepting place as I allowed curiosity to have the space it needed in my life to expand.

That curiosity gave birth to my own truth: I could love and be loved by a man or a woman.

I could lean into connections and relationships and open to the possibility that the heart can hold more love than it can push out. I could understand and accept that all of us are just human, f*cking up along the way as we try to seek our own inner truth and follow our own path.

I could accept and appreciate the beauty of a person and love them, regardless of whether a religion or society had given their permission or whether their gender was the correct one.

I could stop obeying rules that harmed me.

I could come out and be me.

In & Out of the Queer Closet.