Frida Kahlo’s Painting that Represents Every Woman who’s been Hurt. 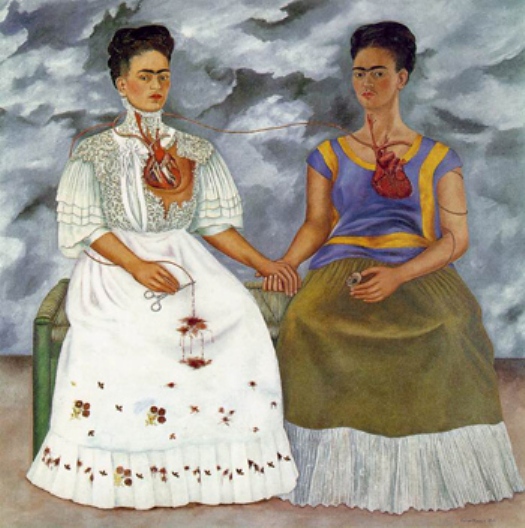 Frida Kahlo completed around 200 paintings throughout her lifetime.

Having painted abundant significant artworks, one painting however ultimately stands out.

This painting is “Las Dos Fridas” (The Two Fridas), and it was completed directly after her divorce from Diego in 1939. Personally, I’m so awed by “Las Dos Fridas” that I have it hung in my bedroom.

Anyone who is familiar with Frida knows that her work was mainly influenced by the traumatic events of her life, and mostly from the infidelity of Diego, her husband. What she went through and what she experienced with Diego gave birth to an immense creativity that became the emblem of Mexico.

From a personal point of view, I largely consider “Las Dos Fridas” to be a representation of every woman who was once hurt, rejected or abandoned. I think Frida plainly painted what women fail to express. This painting is a symbol of the emotional pain Frida and other women go through when detached from the man they love.

On the right, we see Frida who was respected and loved by Diego, wearing a blue and green traditional Mexican costume called “Tehuana.” Also, we notice an amulet in her hand with the portrait of Diego as a child.

On the left however, we see Frida in a lacy white Victorian dress—a more modern/European robe. She is the Frida who Diego abandoned. In her hand, she holds scissors from which blood is dripping.

In the background, Frida painted a stormy sky with clouds that hold rain. We may interpret this as a reflection on her inner state which was in turmoil.

The hearts of the two Fridas lie exposed. On the left, the unloved Frida’s heart is broken while the other Frida’s heart is complete and healthy. Looking closer, we notice a vein beginning from the amulet of Diego that Frida is holding. Following its path, this vein is traveling through both hearts and is finally cut off by the scissors held in the lap of the rejected Frida.

Frida tries to stop the flow of blood coming from the amulet of Diego but she fails. The blood slowly starts covering her white dress.

Finally, we see the two Fridas holding each other’s hands. Frida tries to tell us that she had no one but herself. She was her best companion in that time of melancholy.

The iconography of “Las Dos Fridas” is not only profound, but intense.

Reflecting on my own past experiences, I can understand every emotion Frida tried to portray on her canvas. When separated from the ones we love, we do split into two people. Our first person tends to keep the memory of the partnership alive, while the second one wishes to detach. And sometimes, we are just like Frida: we fail to cut the vein that binds us with the one we love. Even if we do cut it, the blood will keep on dripping.

In those times of emotional disturbance, we hold our own hand and endlessly wait for the blood to stop flowing. We look at our other half and promise her that it all will turn out just fine. The astonishing part of the painting however, that it displays remarkable resilience. Just like Frida, women who were hurt acknowledge the pain they are going through. But eventually, in moments of strength, we are ready to put forth the effort to get up, let go and trust in our left selves.

The amulet we hold of our loved one only survives as a memory in our mind. We are the only ones who decide when to let go. And maybe, some of us decide not to—just like Frida. She wouldn’t have produced moving artworks if it wasn’t for her pain. Sometimes suffering is the door to creativity, consciousness and understanding.

“Las Dos Fridas” is a painting that can teach us several lessons.

Personally, this painting taught me the most important lesson of all. As Frida said: “I am the person I know best.” No matter how people might interpret my state of mind, at the end of the day, only I know the intensity of my emotions. And just like Frida, in the good times and bad, I hold my own hand and love myself.

10 Lessons to Learn from Frida Kahlo.