Healing from Heartbreak Through Yoga. 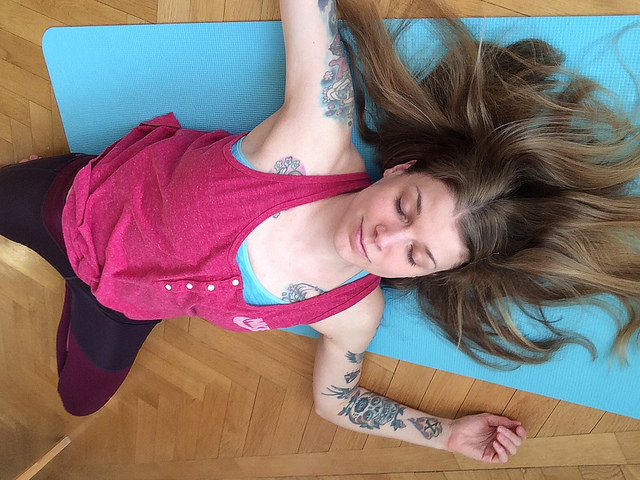 I was always a runner. A P90X-er, An Insanity girl. Run. Jump. Lift. Harder, faster, stronger.

“Doing” was a substitute for feeling. If I slowed down, I might possibly feel something uncomfortable and that wasn’t gonna happen.

Until feeling became the only path to healing. So yoga and meditation became a daily part of my practice. I was told that yoga would be transformative. It’s been proven to effectively treat the stress and depression that comes with any kind of loss.

So I was game.

I thought yoga was going to be a piece of cake for me. I’m an athlete. A girl who has worked out hard her entire life. As if I couldn’t strike a downward dog pose with the ease and grace of an accomplished yogi! Please…

Except I couldn’t that first day. The first mirror into my life.

I thought on the outside I was lookin’ good…had the teacher fooled that “I got this.” Nope. She was onto me from day one. Corrected my alignment. Told me I was on the right path but could straighten out a few things. She adjusted my hips, the position of my hands. Then told me to breathe.

Exactly where I was in my life. I needed some adjustments.

And so began a practice where I slowly started to master more challenging poses in class, as I navigated the challenges in my life. And I started to realize with much amusement that they were directly mirroring each other as I tackled each one.

Tree Pose: I put my weight onto one leg. Drew my right foot up and placed the sole against my inner left thigh. It took strength, focus and balance. I kept losing my footing and falling over. It took me awhile to find my balance.

In my life, I was never balanced. I was an all or nothing girl. I put 110 percent into my job, my writing, my children, my workouts, my friendships. And I was spent. No good at any of them because I hadn’t learned balance. But once I mastered that tree pose, which took constant focus and attention as I pulled myself into it, I learned balance in my life.

Crescent Lunge: One of the best heart opening poses in yoga. I would step one foot between my hands, raise my upper body toward the ceiling and reach both arms overhead until I could arch all the way back into a backbend. My heart was exposed, open, vulnerable. There were many classes I thought I was so far back I was almost hitting the floor.

Until my yoga teacher would push me back further…knowing I could do more to open that heart. Damnit.

In my life, the same thing was happening. I allowed a few men into my space. Gave them a little of myself, thinking I was giving much. A few of them pushed me further. A little outside my comfort zone, daring me to be more vulnerable, to open my heart a little bit more.

Though scared, I found myself bending just a little bit further each time, until I found myself in a place where I was at least willing to try opening it instead of staying hunched over protecting it all the time.

Warrior Pose: The name says it all. Feet grounded firmly. Both arms outstretched in opposite directions. It’s a “don’t f*ck with me” pose. I would think that I was in complete alignment each time I did it. I learned that as bad ass as I thought I was in that pose, my arms would always start to drift downwards. I never stood as strongly in my power as I wanted.

In my life, I was doing the same thing. I’d roar to protect myself, then back off. I was weak. Never really owning the full power inside myself.

I didn’t hold strong for as long as I needed to before caving and giving into someone who roared louder than me (letting those arms start to dip). With determination, courage and confidence I mastered that pose.. both inside and outside the yoga studio.

Handstand: It is what it is. Full blown kicking your legs up into the air and holding steady with all of your arm strength, balancing using your core muscles and not falling over. It’s an extremely advanced pose. One I thought I’d never be able to do because I wasn’t strong enough.

Until the day I was…”I did it!” I silently screamed out during class. I was ecstatic.

In my life—my strength became iron will. I never thought I would be able to manage two kids on my own. Like that handstand, I’d keep trying, then fall over. Try again… then fall over. It had me beat. I wasn’t strong enough.

Until I mastered that pose. All of the sudden I realized I had the parenting thing down as best as any mother in my position could do.

Savasana: is usually the last pose done in a yoga class. It is also called final relaxation. I used to want to high tail it out of the class at this point. What a waste of time, I’d think. Who has time to just lay there and be still for 10 minutes? It was soon to become my most favorite part of class.

In my life, I was never still. Never rested. Never could just “be.”

I never wanted to sit still long enough to feel emotions come up. But when I mastered that Savasana pose, I felt healed. There were many classes I cried during savasana. I still do. I let out my grief. I let out my sadness. I feel everything in that pose. It is the pose of release and letting go.

In my life, it was the final step toward healing.

The Journey of Self-Love through Yoga.