All Screwed Up about Christmas? Start Giving Love—Specifically. 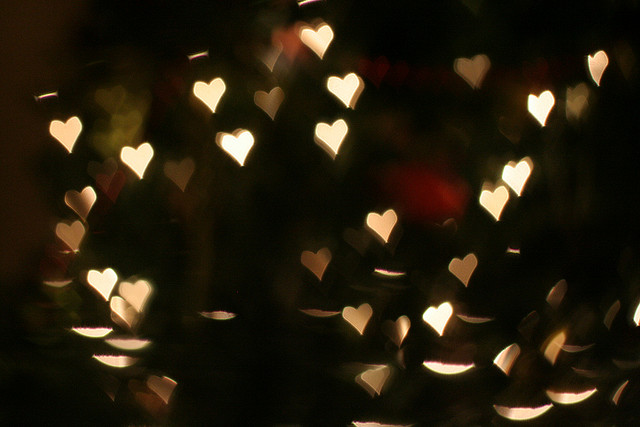 I know people who truly love the card more than the gift—especially if it’s hand-made or filled with writing.

And I know some people who hate commercial crap—people who have de-cluttered everything and don’t even want to see a gift bag coming towards their zen-like homes, no matter what it is filled with, if the thing will take up counter space.

Then there are those  who are so damn broke again, they are hoping not to get a gift for which they will feel guilty for not being able to return.

I know these people.

I am “those” people.

I’m exhausted by the holidays.

I’m tired of using birthday gift cards to buy Christmas gifts, so I can avoid putting gift purchases on my credit card or conscious. I’ve cut back quite a bit, focusing mostly on kids, but still—it’s too much time and money. There’s not enough savoring or sanity in my holidays.

Still—I’m so damn tired of worrying about shopping and finances and all the stuff.

And yet, I do it. Every damn year.

Last Sunday my daughter and I helped stuff “Bags of Kindness” for homeless people. It’s a fundraiser one of my daughter’s friends  is organizing.

What is in these bags?

This is what some people need.

Not iPads or Hover Boards or items of clothing tattooed with Pink. (And yes, I was that Mom who was at Victoria’s Secret looking for the pink-colored clothing, before I realized any color is fine as long as it says “Pink.”

A $60 sweatshirt equates to how many tampons?

There are daily, basic necessities people go without regularly.

I’m not pointing at you.

I am one of these people—and it’s not even abstract for me.

My recently deceased father was homeless, and I’ll be honest—I was not filled with compassion for him or any other homeless people. No, I was filled with anger, rage and hostility.

Not at him exactly, but at war—at Vietnam, at addiction, at child abuse, at poverty, at mental illness.

My father was violent, addicted and troubled before and after Vietnam.

Before and after having kids.

But that’s not what this piece is about—except it is.

I mean, it’s not about how I feel about my father—it’s about how can we have people in the world broke, suffering and in anguish, while we also have stockings filled with gift cards, hand cream and Yankee candles?

And sometimes they are someone’s father.

There are also people who just can’t get enough clothes covered with the word “Pink” under their Christmas tree.

And these people are sometimes in the same family—even though they’ve never met each other.

My father was homeless. My daughter would love a guitar strap.

I don’t get life.

I don’t get the contradictions. I don’t understand addiction—or abuse, or violence—or the huge gap between the “haves” and the “have-nots.”

Nor do I have a solution or even a big insight. This isn’t a piece of writing about how I finally realized all that is really important is “x, y and z.” Nope.

Life is layered and strange. I’m the mother who wants my kid to smile on Christmas morning, and I’m also the daughter who still puts up the skinny Santa from the 1960s that is made of porcelain—the one I’m told was from my father. I’m both of these people, under this same slab of skin.

I have no idea what the meaning of life is, or how to achieve holiday (or even day-to-day) sanity or how to balance and care for myself and my family, much less the whole big world.

I know sometimes—underneath the need to please, impress or provide more than one has—there is a whole lot of emotional stuff. I’ve got some bags of my own left to unpack in that department. My house isn’t fully de-cluttered yet.

But I’m doing more homemade food and snacks and giving writing and cards as gifts from the heart. I’m putting less on my credit card, because honestly, I just can’t yet not buy anything—even though I know it’s not very mindful of me.

I am where I am, and I’m working on strengthening that muscle, and bringing more consciousness into my habits and choices.

I’m looking what messages I’m sending as a mother, when I say I value love, meaning and security, yet I spend beyond my means and run ragged in circles trying to do too much.

My kid is seeing all of that contradiction. She’s not screaming, “You big hypocrite!”—probably because she benefits the most right now. She is, after all, 13 years old and some of the stuff is pretty important to her.

I’m trying to balance how much I’m buying into that and how much I’m accepting that what’s important to her at this age isn’t entirely up to me, though it’s influenced and shaped by me. And I’m also working on those “Bags of Kindness.”

The truth is, I’m in the thick of it with this one and not close to resolution.

“Hate generalizes. Love specifies.” That’s what Robin Morgan said, and I heard it in Gloria Steinem’s latest memoir. In my writing class last week we used the quote as a prompt. Although I had thought it might be a prompt to talk about politics, and the dangers of hating and stereotyping and fearing, it turned into something else.

It turned into a piece about writing love letters—well, writing about someone loved in excruciating and mundane detail. Writing about them in flow, in routine, as they wake, play piano, cook, drive, make a fire or tend to a person, plant or animal.

The descriptions could have thoughts, insights and feelings. It was about observing someone else, not just visually, but with heart. It was about finding the ordinary things we often forget to appreciate, and it also allowed for the (almost) too-tender-to-admit things to be written.

So by doing that, I accidentally discovered some no-cost, meaningful gifts to give—letters.

What has not yet made it to language—or even all the way to consciousness—that responds to this invitation?

Instead of simply writing “I love you”—why not provide details?

Why not say: “Here’s what I see, notice, feel and admire. Here’s what is unique to you in appearance, gesture, manner and way of being. This camera or recorder or pen of my heart captures this…”

For those who love the language of words—or of being seen or appreciated or noticed—this is better than money, stuff or well—anything.

Someday, when I’m braver and able—I will start these letters to all I love on Thanksgiving and give these, and only these, as gifts.

And if I’m lucky, I’ll receive some in return.

How to Feel More Joy During the Holidays (By Doing What we Want).