Jiddu Krishnamurti: 8 Wise Facts from the Guru Who Didn’t Believe in Gurus. 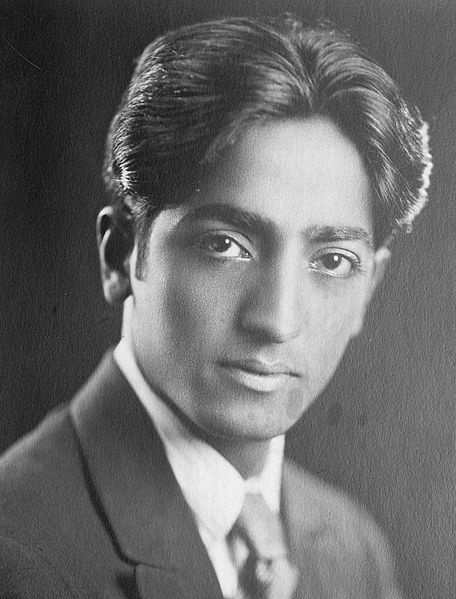 “Krishnamurti is one of the greatest thinkers of the age.” ~ The Dalai Lama

There are many so-called “spiritual teachers” who are permeating the spiritual realm these days.

At the end of the day, no matter what our beliefs are, the majority of us find ourselves in need of a spiritual teacher to guide us to the non-physical sphere, where truth and enlightenment reside.

Spiritual teachers come in different forms. They can be nature, books, people or events in space and time.

Like many people who are on the spiritual path these days, I sometimes rely on books written by gurus, self-help authors and spiritual teachers.

Sadly, so many people have been taken advantage of by these same gurus, authors and teachers for the sake of money and popularity. Personally, I’ve had my share of fake spiritual teachers. Some I’ve had interactions with in the past, and the others I have received messages from through their books.

It cost me a journey to Nepal and India and authentic spiritual books to learn to discern between a truthful guru and a fraudster.

However, not everyone will travel to the Far East to meet a Guru. Most of us who are trying to find our way—particularly those who live in the West—rely on books like I still do.

The books that I depend on were written by beautiful souls, whom I personally consider to be authentic, truthful and without greedy intention of becoming rich and famous.

Funnily, some of the books I cherish most were for a Guru who refused to be regarded as a Guru.

He is Jiddu Krishnamurti.

He is the teacher who wanted no worship, nor flattery. He only hoped for a revolution in the human psyche.

Krishnamurti claimed no allegiance to any teachers, religions or dogmas. He spent his life traveling to speak about humankind and societal issues.

I think the authenticity of Krishnamurti has led me to regard him as one of my remarkable teachers. Not only do I respect his words, but I also see truth and transparency in all of his “facts.”

I use the word “facts” in the title instead of “quotes” as Krishnamurti always claimed that what he points out are facts and not teachings. He also added that we are free to take them or leave them. Krishnamurti refused to use any technical words as he thought that no technical type of expression will help us solve our own most difficult problems or the world’s most complex issues.

He adds in his book The First and Last Freedom:

“I have not read any books on psychology or any religious books, fortunately. I would like to convey, by the very simple words which we use in our daily life, a deeper significance; but that is very difficult if you do not know how to listen.

There is an art of listening. To be able really to listen, one should abandon or put aside all prejudices, pre-formulations and daily activities.”

One particular story about him still gives me the shivers whenever I read it and thus, I try to drink from the spiritual cup that Krishnamurti had sipped from. Record says that in one of the lectures that he was once giving in California, he leaned forward toward one of his audience members and asked him, “Do you know what’s my secret?” The audience was silenced and leaned forward themselves to listen to Jiddu’s answer. Then he said with a smile, in a calm voice: “You see, I don’t mind what happens.”

How beautiful would our lives be if we really didn’t mind what happens?

Krishnamurti made a remarkable change in the way I perceive things, and every time I take things seriously or “mind what happens” in my life, I remember his significant words.

The simplistic yet powerful lessons of Krishnamurti have the ability to re-format our minds and attune us to the real nature of our beings. His teachings are so intense that I always had to read his books more than once so I could process the deeper meaning behind his words.

I believe considering Krishnamurti’s words can help us learn how to start by working with ourselves first. As a speaker, he consistently insisted on having self-knowledge and on working inwardly before changing anything outwardly.

Although he didn’t like to be called a teacher, for so many—including myself—he is one.

As he says, we are free to take or to leave his words. For me, taking them has made a significant change in my life and I hope they make a change in yours as well.

Below are eight facts that I have personally gathered from his book, The First and Last Freedom:

On Change in the Present Moment.

“If you do not change now, you will never change, because the change that takes place tomorrow is merely a modification, it is not transformation. Transformation can only take place immediately; the revolution is now, not tomorrow.”

On System and Man.
“A system cannot transform man; man always transforms the system, which history shows. Until I, in my relationship to you, understand myself, I am the cause of chaos, misery, destruction, fear, brutality.”

On Self-Knowledge.
“The more you know yourself, the more clarity there is. Self-knowledge has no end—you don’t come to an achievement, you don’t come to a conclusion. It is an endless river. As one studies it, as one goes into it more and more, one finds peace. And it seems to me that without this understanding of oneself, merely to read books, to attend talks, to do propaganda, is infantile.”

On Choice.
“Choice brings about conflict. The chooser is in confusion, therefore he chooses; if he is in confusion, there is no choice. Only the person who is confused chooses what he shall do or shall not do. The man who is clear and simple, does not choose; what is, is. Action based on an idea is not liberating; on the contrary, it only creates further resistance and conflict.”

On Time.
“A man who relies on time as a means through which he can gain happiness or realize truth or God, is merely deceiving himself; he is living in ignorance. A man who sees that time is not the way out of our difficulty and who is therefore free, such a man naturally has the intention to understand; therefore his mind is quiet spontaneously, without compulsion, without practice.”

On Suffering.
“When there is no observer who is suffering, is the suffering different from you? You are the suffering, are you not? You are not apart from the pain—you are the pain. What happens? There is no labeling, there is no giving it a name and thereby brushing it aside—you are merely that pain, that feeling, that sense of agony.”

Source: The First and Last Freedom