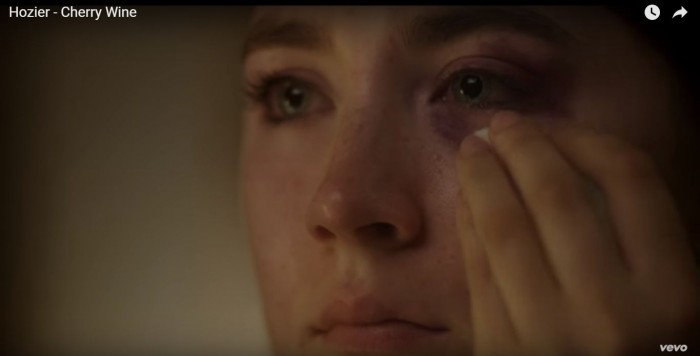 Two of Ireland’s hottest young stars have teamed up to increase awareness around the complexity of domestic abuse and raise funds for charities across the globe.

On Valentine’s Day, Hozier released a new video for “Cherry Wine,” which was originally written from the perspective of a male victim of abuse, although the flip-side scenario is portrayed in this video with Ronan playing the abused.

The song itself was released as a charity single on itunes two days previously.

The video is beautifully shot and makes for compelling viewing. Violent scenes are not depicted—rather, the complexities behind why people stay in abusive relationships are subtly drawn, as we are only shown the couple in a loved-up state.

Separately however, there is the faintest hint of the demons that may be felt by the abuser (played by Moe Dunford), with the spotlight squarely on the victim’s inner turmoil and trauma.

“Domestic violence is an ongoing issue in our society, the statistics of which are shocking and the effects of which damage whole families, communities and span generations. With the song Cherry Wine, I tried to get across the difficulty of coming to terms with and facing up to domestic violence and the dynamic of an abusive relationship. I’m honoured to be joined by Saoirse Ronan, Dearbhla Walsh [director] and Moe Dunford in spreading awareness on this issue.” ~ Hozier

“I am equally honoured to join Hozier to create awareness for the #FaceUpToDomesticViolence campaign with the release of “Cherry Wine” as a charity single. The song has always been one of my favourite tracks on his album. I hope through the video and song we can shine light on the issue and complexity of domestic abuse and in doing so help those caught up in the cycle of domestic violence.” ~ Saoirse Ronan

Just two weeks out from a general election, the main designated charity, Safe Ireland, is calling on the electorate to make #FaceuptoDomesticViolence an election issue and a hot topic of discussion with doorstep canvassers.

However, Hozier, Columbia Records, Island Records and Sony/ATV Music Publishing will also be donating proceeds to other international charities working with and on behalf of domestic violence victims. After all, domestic abuse knows no geographical boundaries.

According to studies published last year, approximately 35% of women worldwide have experienced physical or sexual abuse, with the majority receiving it at the hands of their intimate partner. Of course, these statistics are probably less than the true figure because domestic violence is one of those stigma-issues that go under-reported.

I was unable to find current global statistics on domestic violence against men, but in Ireland the latest reports stand at 26%—again, probably lower than the actual number.

So, shouldn’t this be a vote-influencing issue across the globe, whenever and wherever an election is taking place?

It’s up to the citizens to make it so.

Meanwhile, we can all help raise awareness and reduce the stigma by getting behind this campaign.

Download the single here and watch the video below.

If you need support around domestic violence, End Domestic Violence Global Foundation provides a list of international partners on this link.