The Woman Behind the Man: 14 Inspiring Quotes from America’s First Ladies. 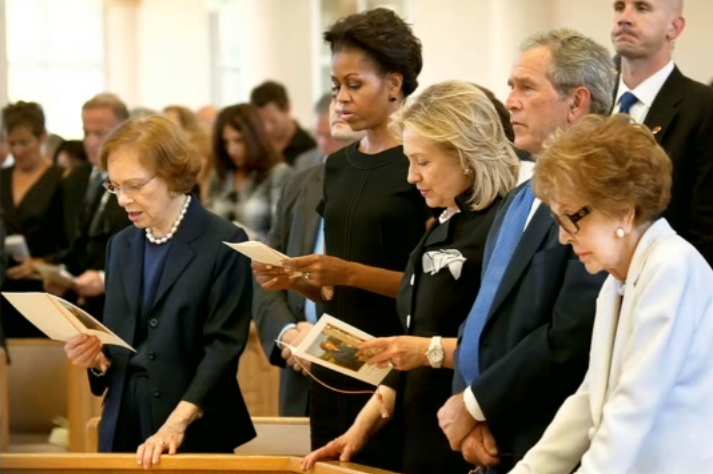 Growing up, I was never the little girl who dreamed of being President of the United States.

Frankly, the position seemed like too much guts and not enough glory. Your every move being scrutinized, people simultaneously hating and loving every decision you make and your hair turning gray long before you’d like it to. Sure you could affect great change, but it would come at a price.

And being First Lady was a job I envied even less. In part, because my little feminist heart never wanted to be referred to in relation to a man—even a man I had chosen to spend my life with.

But time and experience have shown me the strength and grace that comes with being the woman behind the man. Because only a woman confidant in her power can handle this kind of life. Below are words of wisdom from the women who have used their position as First Lady over the past 85 years to both inspire and educate us.

“No one can make you feel inferior without your consent.” ~ Eleanor Roosevelt [wife of Franklin D. Roosevelt, who took office in 1933]

“I deplore any action which denies artistic talent an opportunity to express itself because of prejudice against race origin.” ~ Bess Truman [wife of Harry S. Truman, who took office in 1945]

“I believe that every woman over 50 should stay in bed until noon.” ~ Mamie Eisenhower [wife of Dwight Eisenhower, who took office in 1953]

“Once you can express yourself, you can tell the world what you want from it. All the changes in the world, for good or evil, were first brought about by words.” ~ Jacqueline Kennedy Onassis [wife of John F. Kennedy, who took office in 1961]

“The clash of ideas is the sound of freedom.” ~ Lady Bird Johnson [wife of Lyndon B. Johnson, who took office in 1963]

“I have an independent streak. You know, it’s kind of hard to tell an independent woman what to do.” ~ Betty Ford [wife of Gerald Ford, who took office in 1974]

“You learn something out of everything, and you come to realize more than ever that we’re all here for a certain space of time, and then it’s going to be over, and you better make this count.” ~ Nancy Reagan [wife of Ronald Reagan, who took office in 1981]

“Never lose sight of the fact that the most important yardstick of your success will be how you treat other people.” ~ Barbara Bush [wife of George H.W. Bush, who took office in 1989]

“It is past time for women to take their rightful place, side by side with men, in the rooms where the fates of peoples, where their children’s and grandchildren’s fates, are decided.” ~ Hillary Clinton [wife of Bill Clinton, who took office in 1993]

“We should always have three friends in our lives—one who walks ahead who we look up to and follow; one who walks beside us, who is with us every step of our journey; and then, one who we reach back for and bring along after we’ve cleared the way.” ~ Michelle Obama [wife of Barack Obama, who took office in 2009]

And because my feminist heart adores her candor (and because I like to believe every first lady has felt this way at some point), here’s a bonus quote from Mellie Grant, fictional but fabulous former First Lady on ABC’s Scandal: