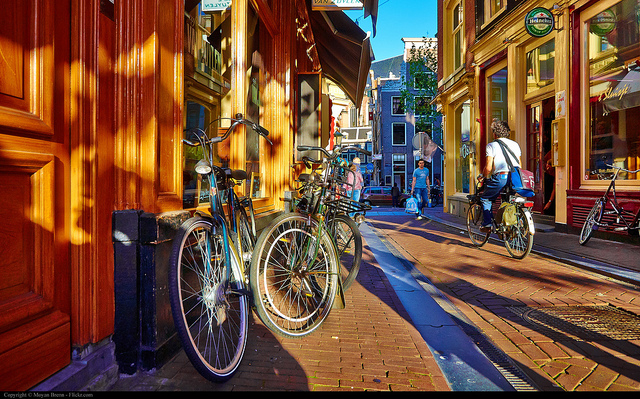 He had been on the streets for three months, but new to homelessness; he was already on his way out. After about three months, he explained, the government enters you in their system and finds you work and a home. Perhaps this was why there were so few homeless people in Amsterdam.

A deeper cultural explanation revealed itself a few minutes later when a group of girls came up to give him a big bouquet of flowers, as if he were a rock-star. He smiled brightly and as they walked away he said with a tearful twinkle in his eyes that it had made his day. “You are still a man.”

Amsterdam takes care of its homeless because the city has a deeply rooted sense of equality and thus views them as human beings. Amsterdam has been a cosmopolitan and liberal city for many hundreds of years. It had the first Republican government in the modern era and welcomed free thinkers and Jews when Europe was still immersed in religious wars. It stayed out of the great wars of Europe, and thus progressed free from social-traumas and collective tensions. And even though it has been a commercial success, Amsterdam remains a highly equal society. There are lessons here for America.

Kate Pickett, co-author of The Spirit Level, a landmark book on the social benefits of economic equality, first pointed out to me in an interview that economically equal societies feel different. She noted that whenever she arrives in a more equal society she feels something relax inside. This happened for me in both Amsterdam and Serbia, which is an unusually equal society among middle-income countries. People in these places felt as if they were living in their own skins, as if they were not trying to be someone or somewhere else. Residents of Belgrade, Serbia seemed comfortable and relaxed, while those in Amsterdam had about them a circumspect calmness. And it felt much the same in my brief visit to highly-equal Sweden as well.

Numerous studies demonstrate that, once they join the top 50 or so most prosperous states, people in more equal societies enjoy less heart disease, cancer, mental-illness, murder, and incarceration. They live longer and are more likely to survive at birth. They have higher numbers of patents per capita and even recycle more. It is not just the poor who do better in more equal societies either. Relative to their counterparts in less equal societies, the rich do better as well. For inequality exacerbates the anxieties associated with one’s place in the social hierarchy, notes Pickett. This leads people to obsess over issues of status and personal accomplishment. Anxiety drives many of our worst habits and causes some of our most debilitating diseases, fueling consumerism and drug-addiction alike. The result is all-too-often an acquisitive society of the sick and self-centered.

Amsterdam is both socially liberal and personally conservative. The Dutch profit from hashish-smoking tourists but do not partake much themselves. People travel mostly by bicycle, foot and tram, living quite simply amid a network of canals, built half-a-millennium ago, and ringed around the city-center in concentric circles. These waterways are lined with thousands-upon-thousands of decrepit old-houseboats, which would have been destroyed to make way for new real-estate but for Amsterdam’s post-sixties, counter-cultural government.

Things seemed to fit together better in these places. Amsterdam and Stockholm painted a gentle concord between water and land, roadways and townhomes. Belgrade blended rust-streaked, cement-buildings of the communist sixties with monuments from the Habsburg Empire, highlighted by trendy, renovated interiors. In these cities, the past breathes through open-streets and well-preserved canals. Perhaps things seemed to fit together aesthetically because people felt themselves in it together, as if they had entrained their own internal rhythms to that of the waterways and the spacing of the buildings. Levels of social-trust tend to be higher in more equal societies and this seems to go far in explaining why these cities have been built on a more human-scale.

Contrast this with America, the glib and bold. The American past tends to feel dissociated from the present, as each business is dissociated from its rivals, with corporate logos vying for attention at every turn, in a landscape of aesthetic incoherence. Americans like to hurry, but the mad-rush tends to get stalled in the traffic of sprawling suburbs, which line the outer-margins of city-centers, whose real-estate ever-climbs upward. If Americans do not shoot you with their guns, they will kill you with their cars, for Americans do not tend to feel themselves in it together and neither do they care. All of this shows in the statistics. To name but a few, America the highest murder and incarceration, obesity and homelessnes, rates in the developed world.

Protesters often chant, this is what democracy looks like, amid a cacophony of voices, in protests across the world, but this is what equality looks like. It is charming and friendly, relaxed and beautiful. Amsterdam has learned to let things be, to preserve its old buildings without making them into monuments, to maintain its waterways, without grand gestures. Amsterdam has learned how to give people the freedom to live their lives as they please without falling into the sort of rank hedonism that can tear a society apart. Somehow they seem to have gotten the balance right. It looked much the same in Sweden, which is often viewed as a beacon of sanity in a world gone mad. And even as Serbia finds itself mired in political scandals, with entry into the European Union repeatedly stalling, they seemed to be living well for residents of an emerging-market.

As Americans contemplate electing a democratic-socialist to the Presidency, we would do well to give more attention to the things we are likely to see change. This is what equality looks like and it is arguably better and more beautiful than the incomprehensible slobbery of the modern American scene.

If you liked this article, please friend me on Facebook and check out my book, Convergence: The Globalization of Mind.