The Secret Shame Behind Body Dysmorphia. 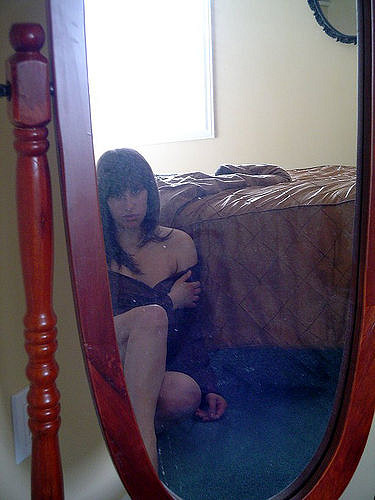 I’ve had body dysmorphia since I was about 8 years old, but I never knew what to call it or that it was, in fact, a mental disorder.

Looking back, I suppose it’s not that strange that I developed it—I was always, always the tallest and biggest girl in my grade.

I was the one looming over everyone else in the back row of my school pictures, the one people called “Amazon” and “Mac truck.” I used to grab at handfuls of my belly fat and wish I could rip them off my body. I’d stare at my face in the mirror for hours devastated by my ugliness, and stand and weep in dressing rooms at the mall—especially the one in the Sears “Pretty Plus” section, which was the only place I could ever find clothes that really fit.

When I was 13, I was finally diagnosed with something “real,” but it wasn’t B.D., it was scoliosis. The doctor slapped a huge plastic and metal body brace on me and told me I had to wear it for 23 hours a day. If I hadn’t already hated my body by then, this would’ve easily gotten me there.

I was trapped in a double cage; the first was my own flesh, the second, this humiliating contraption that made me even larger, and which was impossible to hide.

I never talked about my intense feelings of self-hatred to anyone—to me, they were the most shameful part of a shameful situation. Instead, I became hell-bent on changing and concealing my body, and on developing the kind of attitude which would make people think that I was hot sh*t.

After five or so years, it started to work.

I acted like I loved my height, and stood up as tall as possible. I wore meticulous make up and obsessed about my outfits, often waking up at five am to have enough time to put myself together before school. I got a job so I’d have extra money to spend on clothes, and started to work out and lose weight. Later, I had several cosmetic procedures.

People began to respond to me differently. I got attention from men and discovered I seemed to have some power in my physical presence because of the way I looked, rather than despite it.

But I still hated myself.

This idea, of course, was not my own.

It is the message our culture pounds into the heads of our children—mostly women, but also men—sold to us so that we will buy into the illusion that we need to spend every waking minute and every last dollar trying to be something we are not. I imagine the victims of these corporate lies littering the Western world from sea to shining sea.

What a criminal waste of spiritual resources just so a few people can accumulate wealth.

The really terrible thing, however, is now that I am older (much older), and wiser (just a little bit), I am still suffering—and so are untold numbers of my fellow souls.

With the advent of social media and my willingness to be more open, I have made a radical discovery: I am not alone in this. Women especially (though not exclusively), are plagued by the feeling that their physical selves are loathsome and unacceptable. For many of us this is not a passing feeling of discontent, but a constant and crippling companion to every waking minute of our lives.

There is no event or interaction in which our appearance doesn’t matter, or negatively influence the quality or content of that interaction. And because we are, at this point, supposed to know better, our feelings of inadequacy are deepened by an additional layer of shame; shame about our shallow-ness, and our inability to focus on more important things.

I don’t know the numbers, but I am certain that enough people feel this way that it qualifies as an epidemic—and if it is an epidemic, it needs to be taken seriously.

B.D. is relatively easy to hide. Those of us who have it are likely to suffer in silence, chalking up our symptoms to some personal shortcoming. And while talking about B.D. doesn’t completely mitigate it’s grip, I’ve found it is the only thing that starts to help. Sharing our experiences is profoundly healing, being vulnerable and honest about our pain helps to drain the poison, and it shows other people it’s okay to do the same.

If you think you might suffer from B.D., check the list of signs and symptoms below. If they ring true, add your voice to this chorus, that we might all help each other heal.

According to the Mayo Clinic, some signs and symptoms of body dysmorphic disorder include: