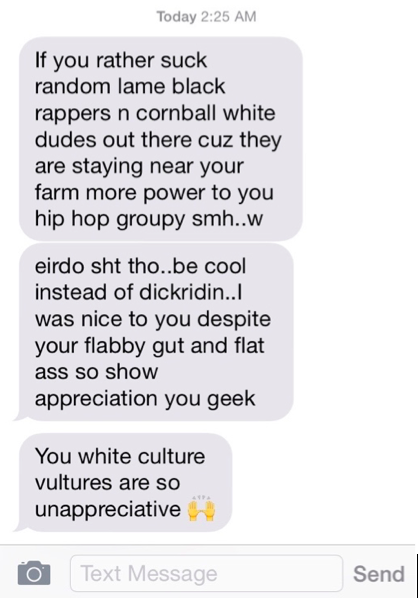 Opening up a conversation about body-shaming and personal boundaries.

Alright, you read it. You read that nasty horrible text and probably feel just as disgusted and down as I did.

This is assuming, you could understand the text.

It took me 20 minutes and multiple searches on Urban Dictionary to figure out what this man was saying (check out my text-translation guide at the bottom). All arguments require context and I will now do my best to share the backstory of this interaction.

As a recent Austin, Texas transplant I was cruising the streets solo one evening during SXSW (a world-renowned music, film, and tech festival). I overheard the conversation of two men walking behind me, and laughed when one of them made a joke. I ended up joining their group for a meal and some hip-hop music afterward.

As the music went on, the man that texted the above started kissing my neck and grabbing my thigh. I felt uncomfortable and asked him to stop. He wouldn’t stop, so I left to join another friend sitting a couple tables back. After following me to the back, I politely and directly informed him that no, I did not want to f*ck him tonight and I had no interest in furthering our relationship. He continued to argue, complimenting my body, claiming he just wanted to chill…so on and so forth. He was not taking no for an answer so I decided to leave the bar. After following me out to 6th street, I actually had to draw attention to us by raising my voice to yell, “I’m leaving,” and literally ran away from him.

Before our interaction escalated, I had shared my number with him and another woman in the group. After that night, he had sent me several texts over the course of the week to which I didn’t reply. Alas, on this beautiful Wednesday morning, I woke up to the above text and immediately felt shocked and disgusted. I am thankful that I was strong enough to walk (run) away from this bully of a man. I am thankful that I value my body and soul and get to choose every single day who I share myself with, where I allow intimacy to grow.

I posted the above screenshot on Instagram saying, “Wishing this man would take some advice from @justinbeiber and learn to #loveyourself.” I had a momentary feeling of victory but soon realized, this is still so not okay with me! Lifting myself up by putting him down is exactly what he was trying to do to me. We all know being shut down does not feel good and so I deleted my post.

I chose instead to write to elephant journal.

I chose to voice my opinions with the hope of creating a dialogue around these issues and inspire positive change. This goes beyond him and me and speaks to a much larger reality that women face every single day, this being just one minor example of the way a woman was made to feel ashamed about herself by a man.

Why does this man feel entitled to sex from me and react monstrously when politely rejected? Why should he be allowed to make me feel insecure about where I set my personal boundaries? Why does he assume that my life revolves around sex and if I’m not engaging in oral sex with him, I must be doing so with someone else? Why should I be made to “show appreciation” because this man decided to talk to me “despite” my physical appearance?

Although interactions like this are both enraging and confusing, I don’t think that engaging with him further would make any changes to our situation. I don’t have the answers to the above questions—if you do, I’m all ears! I do, however, believe that exposing, writing and discussing this type of negative interaction can lead to social change. That both genders need to take responsibility for themselves and the way we treat people.

Cornball = “One who tries to be cool, but doesn’t see just how uncool he really is… “

Dickridin’ = “Sucking up to; to be someone’s b*tch or make yourself look inferior to someone, just to earn their respect or get something tangible in return.”

Culture vulture = “Someone who steals traits, language and/or fashion from another ethnic or social group in order to create their own identity.” 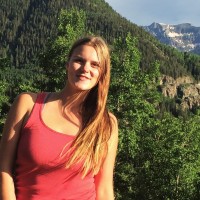