Leonardo DiCaprio Joins Powerful Forces to Rally for a Ban on Beef. 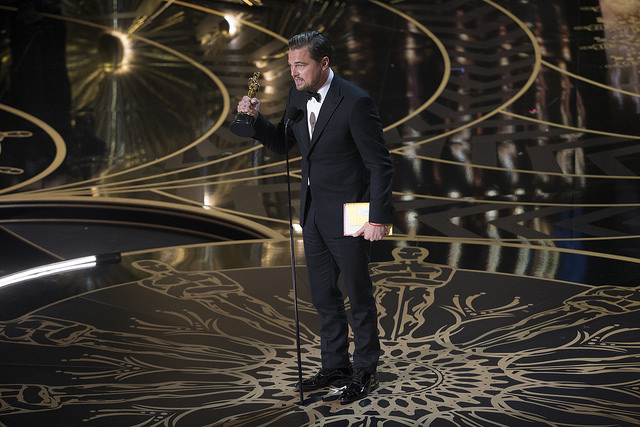 I have always admired Leonardo DiCaprio, however, the appreciation I have for him has now risen even higher, as he is once again using his fame to place his animal rights sentiments into the public eye.

DiCaprio, along with Virgin founder Sir Richard Branson, and naturist and broadcaster Sir David Attenborough, has announced that he will be joining forces with RSS (Rashtriya Swayamsevak Sangh the Hindu nationalist group) chief Mohan Bhagwant and joint General Secretary Dattatreya Hosable to rally support for the group’s worldwide anti-beef movement.

RSS is a controversial and rapidly growing religious organization that was formed in 1925 and is made up of volunteers. It highlights the issues of cow slaughter and takes a strong pro-animal rights stance in line with its Hindutva idealogy, but it also views cow slaughter as a political and environmental issue. Bhagwant is adamant that cow slaughter should be prohibited, explaining the RSS belief in a recent statement: “We feel it necessary to put a ban on meat exports, beef in particular, and cow smuggling in the immediate future.”

It is challenging to implement this policy in India, the second most populated nation with the single largest number of cattle. It is also a country where there is a lot of violence and corruption in the cattle industry, and also where many are poor and malnourished and struggling to eat and survive.

Although cow slaughter is illegal in many states, it is not an easy law to implement adequately without further suffering and the threat of violence. However, as Amit Chaudhery explains, “The fact that India is an overpopulated and malnourished nation has everything to do with government, governance, people and politics. It has nothing to do with any animal.”

Although DiCaprio is vegan, his participation is not purely due to the consumption of dairy or meat; it is also due to the harmful effects on the environment that are linked to the production of beef. DiCaprio has previously spoken out many times about his concerns for our planet and he works hard to raise awareness for climate change and to eliminate cruelty. He has been involved in creating a new version of the documentary, Cowspiracy: The Sustainability Secret, which shows how agricultural farming has a fundamental effect on the environment.

Dicaprio is one of the most popular Hollywood actors in India, mostly due to his performance in the movie Titanic. Many of his other movies, such as, Inception, Shutter Island, The Great Gatsby and The Revenant have also had a huge impact on the country.

RSS is even hoping that their movement will reach beyond India and become global. They have organized a huge rally in the United Kingdom with the support of more than 10,000 Hindus and they hope to recreate the magical atmosphere that was created at Modi’s Madison Square Garden event in New York, which took place in September 2014.

The rally will take place at the same time as Rashtriya Swayamsevak Sangh’s golden jubilee event on July 31st, in the United Kingdom.

Bhagwat, who will be representing Hindus, has a powerful itinerary planned including holding an interfaith dialogue on July 31st with the archbishop of Canterbury, Justin Welby.

Here are some of the facts the filmmakers found while carrying out research for the Cowspiracy documentary:

51 percent of all worldwide greenhouse gas emissions are from livestock and their byproducts, which produce 32,000 million tons of carbon dioxide (CO2) every year.

Livestock is responsible for 65 percent of all human-related emissions of nitrous oxide, which is a greenhouse gas that has 296 times the global warming potential of CO2. It stays in the atmosphere for 150 years.

Agriculture emissions are expected to increase 80 percent by 2050.

Benefits would be seen immediately by reducing methane emissions (as opposed to measures taken to reduce fossil fuel usage, which take decades).

80-90 percent of U.S. water consumption is used by agriculture.

56 percent of water in the U.S. is used to grow feed crops for livestock.

It would take over 20 years and approximately 43 trillion dollars to convert to wind and solar power.

Californians use 1,500 gallons of water every day per person. Half of that number is associated to meat and dairy products.

To produce one pound of beef 2,500 gallons of water are required.

To produce one pound of cheese almost 900 gallons of water are required.

To produce one gallon of milk 1,000 gallons of water are required.

Despite our best efforts to minimize water consumption and reduce our waste, the documentary shows that it is only a token gesture when compared to the mass scale damage being caused by animal agriculture. Many people make lifestyle changes believing they are helping to conserve the planet, for example, driving hybrid/electric cars, taking shorter showers, recycling, and using energy saving bulbs. Unfortunately, personal changes like these will make little difference to global warming. The one choice that impacts the planet the most is our dietary habits and, sadly, this is one that often gets forgotten when considering our carbon footprint.

According to recent analyses, it is unlikely that the global temperature can be kept below the two degrees Celsius threshold thought to be the point where we will cross over into irrevocable planetary damage, unless there is a wide scale shift in the consumption of meat and dairy. Therefore, it is necessary to heighten awareness of the links between diet and climate change so that people can make educated, voluntary lifestyle choices and help influence government and industry policy.

For those who do not want to choose the option of vegan or vegetarian diets they can still collectively make a difference by reducing meat consumption and raising awareness. It is very difficult to force industries to make significant changes, however, we do not need to leave it to the industries to make the choices for us; we all have the ability to make a choice every time we eat.

If we are passionate about saving the planet, we have to consider what is more important, eating animals today, or creating a healthier planet for our future generations.

Here is a link to a stomach churning, horrific, heart-wrenching article by Amit Chaudhery, which offers an insight into the lives of many of the cattle in India. This article delivers what I believe to be an extremely brutal, but well-balanced, explanation.