I am a white, hetero-sexual, cis-gender, upper-middle-class, able-bodied woman, and, if you ask me, I’ll tell you that I’m a good person.

It happened on a Tuesday night, behind the espresso bar at the coffee shop where I work.

There was some down-time before the poetry reading we were hosting would begin, an opportunity that my coworker used for productivity, and I used for playfulness.

My coworker, who is of unknown (to me) Asian descent, was weighing out the smoked salmon that would be used later for sandwiches. He poked fun at himself, joking as he struggled to roll the salmon into plastic wrap perfection, that he was going to lose his job. I’m a light-hearted person who will jump at any chance for a joke. I took it one step further, joking—shouldn’t he be better at this? Don’t his people roll sushi?

This is what my ego—that part of me that needs to feel okay at all times—began saying, buffering a brick wall around myself in protection against any offense, when I had been the one to commit the offense in the first place. Not only did I make an overtly racist comment, but I continued to thwart anything in his response that pointed to that. I continued to thwart anything that left me unguarded, naked, wrong.

As he spoke of his pain—in a veil of sarcasm that so clearly served to cover the wound—I pushed it away with words of, “But I was just messing around. You know I didn’t mean it like that. Right, right, I totally understand where you’re coming from.”

The truth is this: I don’t understand where he is coming from.

I have no idea what the origins of his family are, what the wounds they carry on their backs look like, or how it feels to live in a country where many talk of freedom for all, but few feel it. I don’t know what it is like to be the butt of someone’s joke because of my race, but I am learning that I do know what it’s like to be at the front of aggression.

Whether I meant it or not, whether I was joking or not, what I said was violent.

Not only because my words cut into a history that traces so deep beyond that moment behind the espresso bar—into the paths that his ancestors have walked, sighing—but because I got to poke at a wound and walk away unscathed. Because, though I had been the perpetrator, my coworker was the one left to soften my blow, telling me it was okay. Swallowing his pain to ease my discomfort. Because this happens every day.

Now, I cannot say that I walk away from this situation completely unscathed, for the guilt of my blind privilege is a weight that I carry as well. It just sits on my shoulders differently.

I cannot say that this situation makes me a bad person, but what I’m learning is this: being a good person is sometimes as simple as slowing down to see the person in front of you, to listen to what they have to say. When I finally let my guard down enough to let him speak, let myself admit misstep and messiness—his sharing the story of his pain did not break me down. Did not make me bad, or wrong, or anything. Hearing it made me, if anything, human. Humbled. Here.

And so, this is what I am learning: being a good person is sometimes as simple as listening, and if I am ever to be any sort of activist, it is about learning the subtle difference between when to shut up and listen, and when to scream.

Cut to the next morning.

I have moved forward, because that is what I get to do with my privilege, and I am sitting on the patio of a different coffee shop, sipping on earthy sencha tea and eating a blueberry scone. I am, discreetly or not, people watching. There is nothing more romantic than peeking into the lives of passersby and wondering—if even for a brief second—where they are going. Dressed in a tight black top and flowing lavender skirt, I am sophisticated and soft, confident and serene. I am woman. I am here.

I notice two middle-aged men before me, bantering with each other by the bike rack about a woman whom one of them is evidently pursuing. Make no mistake, I am listening, and as I hear him joke about how this woman needs to be “pounded, pounded into the earth,” my face snarls up into a knot, wound so tight that I can barely untie it. I do not hide my disgust. They see it, and immediately brush it off, because that is what they get to do with their privilege. “There is a woman over there. No more.”

Soon, they part—one friend walks off on his merry way, while the other, the one with the words, walks into the coffee shop. They leave me to fester, with nothing but those words that have been pounded into me so deep that I can barely breathe. I sit there. I see flashes of rape scenes, flashes of my own abuse, flashes of men throwing around micro-aggressions like spare change—walking off cool, calm and collected while I boil over in rage.

I go inside. I go into the bathroom. I stare at myself in the mirror, trying to let out the tears that have been shoved so deep inside of me that it is an effort to bring them forth—as with other elements of voice and power.

This is what it looks like to be a woman sometimes. My heart pounds. I think of going up to him. Spitting in his face at the bullsh*t violence that I am done seeing thrown around so nonchalantly. I think of speaking on behalf of all women everywhere. I picture them at my side, a mob of faces from the Congo, East Africa, India and my hometown, Boulder—I picture their voices being sent through my larynx.

I browse the book section. I find a gem of a book—one on love. I hide in it and its reminder that there is hope for the world. I sit down at a table across from him. I can barely read because the fury is still boiling in me. So I write.

As I sat there writing this letter, my stomach began to feel increasingly unsettled. Not only because of the words that had fallen from his lips so easily, not only because these words had since been shoved into my insides and will stay there for days if not more. But also because these words of mine—a lion’s roar in defense of her kind—may never leave my lips. I may be left to simply chew on the pain, as he walks away with nothing but his springy step, as so many victims of so many aggressions are so often left. This idea made me sick. I would have this no more.

And it went just as I would expect—the minute I got to saying what I had overheard, and how it had offended me, he stole the stage from me so quickly that it was like he had set it for himself. I was wrong. I was making the false misinterpretations. I was rude for listening in on a private conversation.

Now, I do not know or care if this man was able to hear me amidst his babbling defenses, telling me that he would never say such a thing towards women, that he is actually an activist. Because either way, painful as it is to admit, I saw myself in this man. In his defenses and his stories, wanting both of us to believe that he was good. I, too, want to believe that he was good, that he is good, that we all are good, amidst our fumbling attempts to be so.

For I see myself in every man putting up a wall, and in every woman in want of one, staying silent because sometimes to speak means to lose a limb, a life.

I know that then we will begin to remember, in our hearts and hands and tongues and teeth, what it feels like to be a good person. 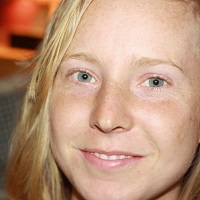