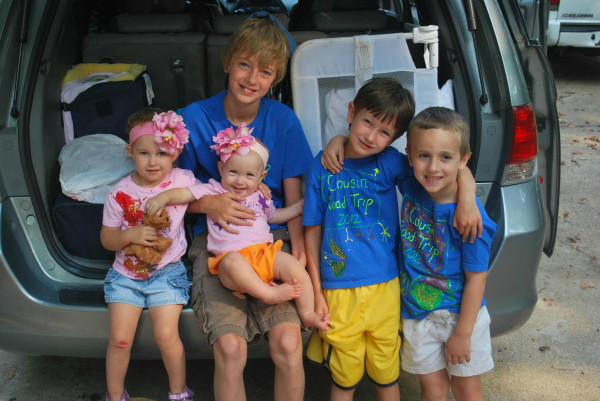 When my 80-year-old grandmother had first heard the news of our upcoming visit, she said, “I am really impressed that you two women and your five children will attempt that trip—without a man! I couldn’t do it, but times have changed and you two are exceptionally capable.”

She was right about us, and it was with a strong sense of our unwavering capabilities intact that my sister and I kissed our husbands goodbye and loaded our five young children, each wearing puff-paint decorated matching t-shirts declaring “Cousin Road Trip 2012!” into my minivan.

Together we drove the 1,000 miles to our homeland of Arkansas listening to Kidz Bop songs at full volume and laughing all the way. The trip was lovely and perfect, but its ending is what I recall the most.

A week later, on our way home, we pulled the minivan over into a restaurant parking lot in West Memphis, Arkansas to stop for a bite to eat and a little space to stretch. It was four o’clock in the afternoon and the baby had been crying, all the snacks had been eaten, and we were so very ready to be home. Our three sticky, tired boys spilled out of the van and began tossing a Frisbee nearby. My sister and I got our two young daughters out of their car seats and sat on a bench just outside the restaurant and nursed them. The heat radiating off the blacktop pavement of the empty lot was oppressive.

Moments later, a dingy white car pulled up and parked near us. With the engine still running, a young man no older than 25 years opened his door and got out.

Tall and thin, wearing a crisp white t-shirt and sagging khaki pants, he looked like the boys I teach at our local high school. Opening the car hood with a squeak, he peered inside, while a young woman sat in the passenger seat, expressionless and unmoving. I remember feeling self-consciously aware of my privilege and my whiteness and felt true sympathy for their seeming poverty and car trouble on this scorching hot summer day. I offered her a gentle smile to let her know I was on her side.

What happened next is a slow-motion movie that creeps back into my mind at the strangest times, and in a lot of unfortunate ways, has changed me.

You think you know how you will react in times of terror and trauma. What I experienced physically and psychologically is something I never had before. It was a noticeable biochemical, animal-like reaction. My whole body, mind and spirit were washed in a warm, heavy and dubious fog. The feeling kept me still, quiet and non-threatening.

Months later, I came across a YouTube video of a nature scene in which I immediately recognized my own limbic system’s survival reaction on that fateful day. In the video, a cheetah hunts down a gazelle and ruthlessly sinks its teeth into the animal’s neck, throwing it to the ground. The gazelle freezes appearing lifeless.

In the face of such overwhelming fear and helplessness, and with the instant awareness that there was no hope to outfight or outrun the predator, like the gazelle, I froze.

The van’s back door had been left open, and using his hand as an anchor on the headrest of the front passenger seat, the man climbed into our refuge and began looting. As if moving through a thick and heavy fog, I slowly turned to my sister sitting beside me and with an incredulous whisper asked, “Are we being robbed?” Staring straight ahead with unblinking eyes, she only slightly nodded.

Next, he was standing in front of us reaching across our very bodies to take our purses, keys and phones…everything. My daughter, only a mere two years old at the time, turned and clawed into me, scream-crying. Somehow she knew.

As the car lunged backward at a quick speed, I once again locked eyes with the woman who robbed me. Her expression remained unchanged and a million years seemed to pass between us in that moment just before they screeched away.

In the YouTube nature video, when the predatory cheetah momentarily slinks away, the gazelle literally comes back to life, shivers all over, stands up and runs away.

I remember the sensation of coming back to life. As if waking from a deep slumber or emerging from deep underwater, I slowly began to hear my children’s cries for their daddy and feel the warmth of my daughter’s terrified incontinence in my lap as the workers and customers ran out of the restaurant towards us.

In the days, weeks, and months that followed, I had the daunting task of not only my own recovery, but facilitating my children’s as well. There were so many questions to which I just didn’t have the answers. So much taken that I could not give back.

It has been four years since that day and as the anniversary looms before me, I find myself thinking once again about the woman in the car. At some point in the weeks following, my middle child had commented, “I just don’t understand how a woman was in the car.” I don’t either, my love. You see it just doesn’t fit our understanding of the world and humans and women and love. The man, sadly, we can sort of accept. It fits the storyline we’ve seen and heard, but the woman? When she looked in my eyes through the windshield and saw me nursing my baby the way her momma nursed her, did she not in that moment know me? Did she not want to save me from that trauma and help protect my kids?

This morning, for the first time, it occurred to me that what had happened to me, my sister and to our children, also happened to her. It’s possible. And here’s the thing: I’m okay. My life is rich in love and security; I am not riding around with a man who is capable of robbing women and children at gunpoint. My trauma from that day is a story I can tell, one with a beginning, middle, and end.

For her, I am guessing that day was nothing more than a link in a long chain of unspeakable trauma that probably began before she was even born. I’m guessing her story of that day didn’t end with a knight in shining armor husband coming to carry her and her children across the Mississippi River to a safe and clean, air-conditioned hotel. I’m guessing there were no elders wrapping prayer shawls around her at church. No therapist appointments made.

So, what I really want to say to the woman that robbed me is this: I’m sorry.

Dear woman in the white car in the Margaritas Mexican Grill parking lot in West Memphis, Arkansas on July 15th, 2012, it has occurred to me that perhaps you think of that day as much as I do, and you remember my face as clearly as I remember yours. I want you to know that I am sorry for what happened to us and I am sorry that you have had to live with the memory too.

I see that our stories and our lives are now forever connected and that as humans, we aren’t necessarily separated into victim and offender, predator and prey.

Dear woman, I hope your life is better today. 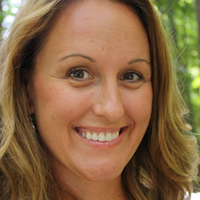