Stop Calling it Political Correctness—It’s Moral Decency & Conservatives Have it Too. 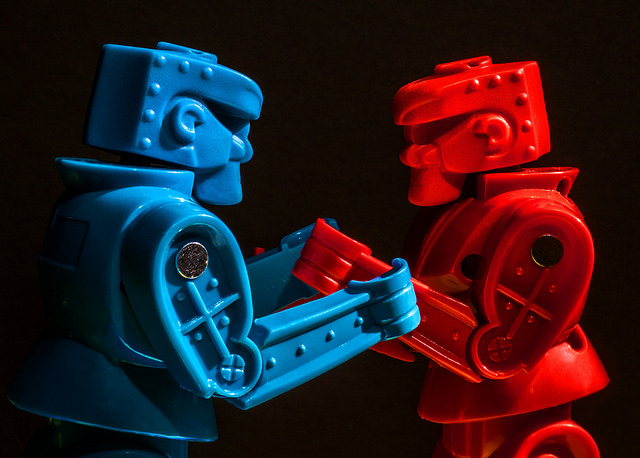 Man is born free, but everywhere he is chained by political correctness—or so we are told in the Age of Trump.

We are now free to be bigoted and crude and need no longer constrain our basest thoughts about the souls of black folk and the ways of women—or so we are told in the Age of Hate.

Political correctness was always a dubious way of framing the effort of liberals to banish racism and sexism from respectable discourse. The expression was popularized by Rush Limbaugh in the 90s and quickly became a catch-all for any effort to expand our moral horizons.

The expression allowed conservatives to dismiss concern for brutalized battery hens with a wave of the hand—you are just being political correct. It made a mockery of efforts to reign in bullying—you are just being retarded. Commentators like Glenn Beck mocked liberals for the shallow and arbitrary nature of their new codes of communication.

There was a grain of truth to the criticism.

Liberals who were themselves skeptical of gay marriage but a few years earlier somehow got away with treating its opponents as some sort of ancient patriarchy. Liberals who had not given a thought to transgender bathroom preferences but a few months ago somehow thought they could get away with being offended by those who could not care less.

The post-industrial era has seen an expansion of moral concerns everywhere. As our lesser priority needs are more frequently being met, we have turned to our own self-actualization; and as we became more sensitive to our own needs, we also sensitized ourselves to those of others. All-of-a-sudden evangelicals were worrying about the rights of fetuses, environmentalists about commitments to other species, liberals about the inner-life of minorities, economists about ending world hunger.

And everywhere it seemed people were experiencing moral burdens they could neither comprehend nor appreciate. But a moral code that is so new that it still makes little sense can appear arbitrary and meaningless. Hence, when conservatives began dismissing the liberal offense as their political incorrectness, they found a ready audience among liberals themselves, most of whom had been at some time or other smacked down by an over-zealous moral guardian.

And so it was that just about everyone became critical of political correctness. But the problem did not lay with the expansion of empathy and ethics, nor did it lay necessarily with the conservatives who found it most offensive.

The real problem lay in our failure to explain just why it was we had all-of-a-sudden become so concerned with the well-being of animals, transvestites and fetuses.

Over the past couple of generations Americans have politicized everything and forgotten how to reason morally. For example, few liberals ever explain that racism and sexism are wrong because people do not have control over the bodies into which they are born. Few conservatives ever explain that abortion is wrong, from their point of view, because aborted fetuses are actually more developed than most of us tend to believe.

Americans ceased to reason with one another over what is and is not acceptable, opting instead to negotiate the boundaries of acceptable behavior through political battles. We got activism instead of reason, politics instead of morality. Ultimately, we got two separate codes associated with liberals and conservatives.

But the triumph of Trump shattered this binary moral bind. Trump pulled the rug from under a national moral consensus.

Nobody prior to Trump thought it was acceptable to brag about the sexual violation of women; no one thought it acceptable to mock disabled people. No one found it acceptable to brag about their penises in public or their financial success, to threaten violence from the stage, or to chant about locking up your political opponents. And far from representing some triumph over political correctness, the victory of Trump has actually highlighted the moral underpinnings of a commonly shared culture.

When conservatives like John Kasich made a show of not voting for Trump, they were not being politically correct, rather they were being morally decent. And however dissimilar their politics may be from those of animal rights and anti-racist activists, they are all tied together in their moral decency. We would do well to find a common language that allows us to talk about it.

There is a lot of talk these days of a left-right coalition against the corporate state.

Many have suggested that Trump rode to power on the back of this incipient movement—time will tell whether his rhetoric was real, but by the looks of his transition team it appears not. However, there is a more important left-right opposition to Trump that will increasingly make itself heard, and that is the one concerned with moral decency.

If Americans are to win the war against Trump, we will need to fight as many of our battles as we can on the battlefield of moral decency, for there we will be able to assemble a coalition that reaches across the political spectrum. But in an era in which increasingly large numbers bolster their feeble sense of selves through offending others, perhaps it is only here where we can restore our national sensitivity.

A time will likely emerge when we begin again to extend the range of our moral concern, and we would do well next time to have the patience to invite conservatives along for the ride. If the road we travel is to be well trod, it is likely to be that of moral decency. It is time we learn to talk about it.

If you liked this article, please check out my book, Convergence: The Globalization of Mind, and friend me to join the dialogue on Facebook.