What can White People learn from those at Standing Rock?

The Cleveland Indians won the game. While I was being entertained by professional sports teams with racist names, at the same time, our tax dollars are being spend on state-funded violence against Native Americans at the Standing Rock Reservation in North Dakota—on behalf of corporate agendas that have no purpose other than to serve the one percent.

The irony is too much to bear. I can’t sleep.

In my heart are the thousands of Native Americans who are camped on the Standing Rock reservation in North Dakota determined to put their lives and bodies in the way of the oil pipeline that crosses their sacred burial grounds and threatens the well-being of the Missouri River. Riot police and armored vehicles have been sent in force by the government intent on protecting the corporate interests that back the pipeline.

How can white people like me, like us, learn from those at Standing Rock? How can we learn from those who have been camped since April and are preparing to camp through a bitter winter with barely any resources and support? How can my middle class American life be guided by the miracle of courage and resolve we are witnessing on that cold prairie in North Dakota?

Those standing at Standing Rock are showing us the way forward; they are reminding us that there is another way to live.

Dr. Martin Luther King had a dream that another world is possible and that dream changed the course of history.

Those who stand today at Standing Rock believe in the same possibility.

I realized that I’m thirsty for this dream. And then I remembered, why people like me, don’t dream it.

I think of the many problems most of the white folk like me seem beset with in our life. The obligations we have. All the reasons why we can’t spare the energy to really say “no” to what is going on.

We are all so scared to lose something, aren’t we?

When will we realize that what we are scared to lose, we can’t possess? Over and over it is those who have already lost the game of accumulation and security, who show us what it is to live for what truly matters. We have to face the truth that so little of what we are living for is actually real.

What is happening at Standing Rock is a chance for people like me to get real. It is our problem. That land could as well be our land or that family our family or that heritage our heritage.

#Blacklivesmatter, Standing Rock and Women standing up for #notokay matter. Dr. Luther King taught us that. Peace begins with living the truth of our hearts. But we must really live it.

It is hard to opt out of this conditioned culture of violence and oppression. Sometimes we can feel like a fish trying to escape the sea. We struggle to wake up from the powerful sleeping potion of the lies and the medications of professional sports and entertainment that keep us from getting too restless.

Yet, another world isn’t only possible, it exists. It is the testimony of Buddha, of Jesus, of Gandhi, Dr. King, Aung San Suu Kyi and those who are standing at Standing Rock.

Standing Rock feels like it is right on the threshold of a new world. A small glimmer of light in the darkness; a dream like Dr, King’s; living as if the future doesn’t have to be like the past. The protectors of Standing Rock are actually standing for the police and the politicians too.

This is what I want to stand for too. It is where I must go.

But it gets harder. As I sit here wide awake I know that my Standing Rock is in my own shadows where I push aside the rightful inhabitants of my inner landscape to build a pipeline to assuage my feelings of emptiness and powerlessness. I notice how often I defend myself from the truth, from justice, because I am scared I will lose something precious: security and love. I believe the lies that I am not enough and that I need to play the game of accumulation in order to keep me and my family safe.

“No!” said the thousands camped at Standing Rock. “Remember! There is another way to live.”

For me, for you, for the protectors and for the police.

Because there is no security and love without the truth. There is no life worth living without forgiveness. It would be easier for me to go to Standing Rock in person than to face the lies in myself. I will go but only if I can find a way to trust that I am not avoiding facing my own illegal occupying force.

So, in these sleepless hours, I travel to Standing Rock on the threshold of earth and heaven. It is a long journey and I know I will falter and turn back but I am determined tonight to find my way there.

Where does the un-truth live inside me? In my relationships? In my stories? What secrets do I have that I fear make me unlovable? What keeps me from living the life my heart most longs to live.

When I find an answer to these questions, do I have the courage to simply stand in its way and pray for our common redemption. That’s right. For its redemption and my own. For my enemies and my friends. For the police and the protectors at Standing Rock.

For no one goes home until we all go home. 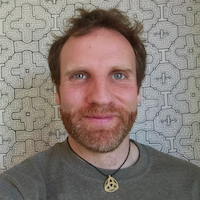