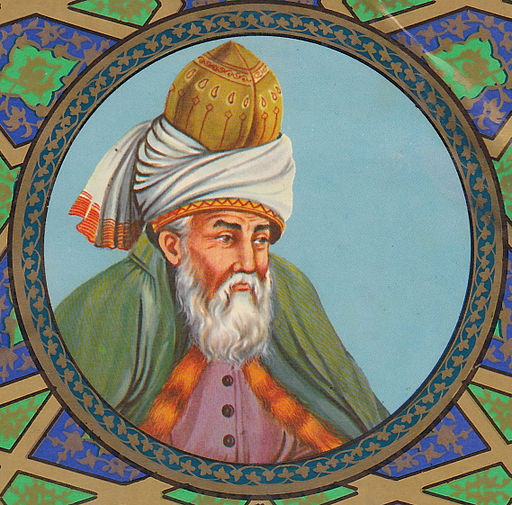 A stranger changed Rumi’s life in the late fall of 1244.

That stranger was Shams of Tabriz. He was hoping to meet someone who would endure his company.

Rumi became that person. And after their first encounter, Rumi and Shams became inseparable. Their friendship is to this day one of the greatest mysteries in history.

It is said that they spent many months together conversing and connecting on a spiritual level. Due to the upset their friendship caused in the religious community, Shams disappeared for many years. Shams’ disappearance transformed Rumi into a mystical artist.

When Shams returned after many years, it is said that the two fell at each other’s feet, so that “no one knew who was lover and who was the beloved.” Shams stayed at Rumi’s home, and as soon as their transcendent conversations began again, jealousies developed. Consequently, Shams was murdered; allegedly by Rumi’s son.

The death of Shams prompted a drastic turn in the course of Rumi’s life. Poetry invaded his world and he eventually called his collections The Works of Shams of Tabriz. It is said that Rumi merged with Shams upon his death, turning Rumi into one of the ultimate lovers of the world.

The line from the poem Music Master speaks to this union:

“Lovers don’t finally meet somewhere.
They’re in each other all along.”

Their mysterious friendship—most likely a love story—is one of my favorites. When reading the poems that Rumi wrote, I can feel Shams in my own being. I sense the intensity of their love and the depth of their connection. Not only do I feel the passion in the verses, I also feel the deep pain that separation leaves in the two lovers.

Their story has taught me that love goes beyond gender, religion, understanding, and logic.

Their love goes beyond physical presence, which we consider a necessity for love to grow between two persons. Rumi showed us that love can grow in consciousness, words, and thoughts.

Rumi offers an example of how to love through his poems. He demonstrated how far and deep love can go.

Personally, I can never read Rumi’s poems only once. I have to go through them more than once to absorb their striking complexity.

Below are four complete poems from Rumi on love that have personally touched my soul:

You that love lovers,
this is your home. Welcome!

In the midst of making form, love
made this form that melts form,
with love for the door,
soul the vestibule.

Watch the dust grains moving
in the light near the window.

Their dance is our dance.

We rarely hear the inward music,
but we’re all dancing to it nevertheless,

directed by the one who teaches us,
the pure joy of the sun,
our music master.

When I am with you, we stay up all night.
When you’re not here, I can’t go to sleep.

Praise God for these two insomnias!
And the difference between them.

The minute I heard my first love story
I started looking for you, not knowing
how blind that was.

Lovers don’t finally meet somewhere.
They’re in each other all along.

We are the mirror as well as the face in it.
We are tasting the taste this minute
of eternity. We are pain
and what cures pain, both. We are
the sweet cold water and the jar that pours.

I want to hold you close like a lute,
so we can cry out with loving.

You would rather throw stones at a mirror?
I am your mirror, and here are the stones.

“In the Arc of your Mallet”

Don’t go anywhere without me.
Let nothing happen in the sky apart from me,
or on the ground, in this world or that world,
without my being in its happening.
Vision, see nothing I don’t see.
Language, say nothing.
The way the night knows itself with the moon,
be that with me. Be the rose
nearest to the thorn that I am.
I want to feel myself in you when you taste food,
in the arc of your mallet when you work,
when you visit friends, when you go
up on the roof by yourself at night.

There’s nothing worse than to walk out along the street
without you. I don’t know where I’m going.
You’re the road and the knower of roads,
more than maps, more than love.

“Someone Digging in the Ground”

An eye is meant to see things.
The soul is here for its own joy.
A head has one use: For loving a true love.
Legs: to run after.

Love is for vanishing into the sky. The mind,
for learning what men have done and tried to do.
Mysteries are not to be solved. The eye goes blind
when it only wants to see why.

A lover is always accused of something.
But when he finds his love, whatever was lost
in the looking comes back completely changed.
On the way to Mecca, many dangers: thieves,
the blowing sand, only camel’s milk to drink.
Still, each pilgrim kisses the black stone there
with pure longing, feeling in the surface
the taste of the lips he wants.

This talk is like stamping new coins. They pile up,
while the real work is done outside
by someone digging in the ground.

I tried to think of some way
to let my face become yours.

“Could I whisper in your ear
a dream I’ve had? You’re the only one
I’ve told this to.”

You tilt your head, laughing,
as if, “I know the trick you’re hatching,
but go ahead.”

I am an image you stitch with gold thread
on a tapestry, the least figure,
a playful addition.

But nothing you work on is dull.
I am part of the beauty.