Getting past what we “want” in a Relationship. 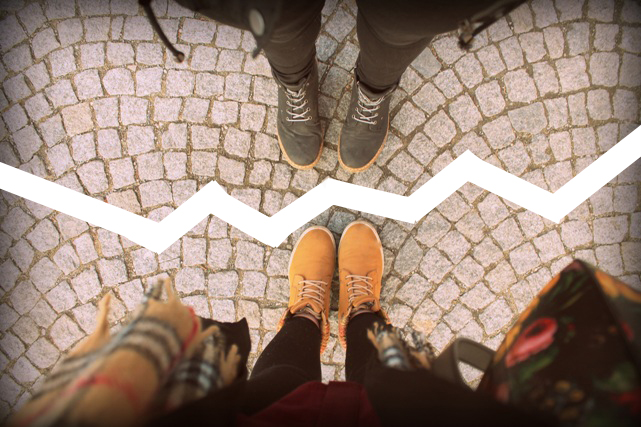 According to self-described “matchmaker of the century,” Hellen Chen, 85 percent of all romantic relationships are doomed to break up.

Lest one think she might be overstating the case, the online matchmaking behemoth eharmony suggests that everyone should expect to have 12 relationships come and go before finding Mr. or Ms. Forever.

If 13 is indeed the lucky number, that shows a whopping romantic failure rate of 92 percent.

As outrageous as these percentages may seem, they certainly parallel my own experience. Having gone through a 15-year formal marriage, a 5-year informal one, and a handful of other relationships lasting anywhere from a few weeks to a couple years, my romantic failure rate is thus far a sterling 100 percent.

Fortunately, I look upon my love history in the mostly positive light of having “learning experiences,” but this percentage has an unforgiving quality, nonetheless.

I had to chuckle recently when a dear friend and ex-romantic partner told me that after two divorces, four years of serial dating, and a brief flirtation with being “married to God,” she’s now certain that she’ll soon find a lasting life partner. How does she know? Because she is now quite sure about “what I want and what I don’t want.”

My fondly amused response arose not from cynicism but from an evolving meditative outlook that’s been as hard-earned as my romantic batting average. I don’t think the problem with most people’s romantic relationships is a failure of will or fidelity, not seeing enough therapists, or not reading enough self-help books. I don’t know the “breakup rate” of past centuries, but I think the high rate in this one has to do with the fact that we are living in an increasingly psychospiritual age.

The influences of modern psychology, rooted in the original work of Freud, and contemporary spirituality—especially as influenced by the far older traditions of Buddhism, Vedantism, and shamanism—has led all of us into a fundamental crisis of identity. Nowadays, almost everyone knows that their ego is a powerful and often dominating force of consciousness that does not necessarily lead them to act in their own best interests.

And the further reaches of both psychological exploration and spiritual discipline lead us to grapple with the idea that our ego identity is not only unhealthy, in many respects, but quite possibly unreal. As the teaching known as A Course in Miracles suggests:

“There is no statement that the world is more afraid to hear than this: I do not know the thing I am, and therefore do not know what I am doing, where I am, or how to look upon the world or on myself.”

Nonetheless, we like to think we know what we’re doing and how to look upon the world and upon ourselves. And when it comes to romance, we especially like to think that we know what we want and what we don’t want. Yet following our self-affirming instincts and hard-earned relationship knowledge always seems to lead us into disappointment, heartbreak, and often into even worse suffering.

Anyone who’s been through a really bitter breakup knows that it’s not just a loss of love that hurts so much but the threatened loss of self as well. This is what I would call the gut-wrenching fear of annihilation.

And therein lies a valuable clue to the diagnosis and healing of the modern breakup.

Instead of looking on failed relationships as repeated assaults upon the self, defeating our most cherished desires and expectations, I think we need to look at them as progressive experiments in undoing the self. And this becomes an easier and happier process, as we become more accepting of it.

For instance, I look back on my marriage as a long and largely happy period of mutual healing for myself and my ex-wife. When it began crumbling, I fought that process ferociously, all the while not recognizing that I was also defending my “self” who had grown stagnant, defensive, and less generous than I could be.

Paradoxically, that’s because the healing, enabled by the marriage, had completed itself. For each of us to grow further, we had to start dropping our somewhat improved egos. The process was catastrophic at first and continued not being fun for quite a while.

Now that I’m good friends with my ex-wife again, I see how different each of us are than we were then. I’ve accepted that the love we began with changed shape, just as we did, and to our mutual credit we came through it, years later, without any residue of resentment or hostility.

For my own part, I’m much less attached to knowing who I am, where I am, what I am doing exactly, or how to look upon the world or myself. That’s why I don’t think much about what I “want” in a relationship.

I am more focused than ever on my meditative disciplines because they provide a “daily walk” toward selflessness. This practice is easier to take than the fear and chaos of the ego-annihilation that surely follows the romantic breakup. I’ve also noticed that the quality and variety of my relationships have grown enormously, even as my conventional “sense of self” has somewhat diminished.

I think it’s because I no longer imagine or anticipate a perfect, centerstage romance that will be everything I ever wanted. It’s just this kind of centerstage anticipation that can lead two egos into a royal battle, where both parties are embittered, exhausted, and fearful of annihilation.

Breakups are not the only means to self-surrender or spiritual growth, of course. I know one married couple who has survived a horrific conflict over long-hidden infidelity and has begun to mend themselves and another who has thrived for decades into the joys of grand parenting. These relationship paths are neither better nor worse than mine or anyone else’s.

But when we bemoan the frequent failure of romance and begin to search obsessively for the “relationship tools” or seductive tricks that will make all the ego’s dreams come true, I’m pretty sure we’re setting off down the wrong path once again.

I think it’s far better to get the self-annihilation over with first—on a daily basis and as often as necessary.

Then the ultimate pickup line may become: “I’m nobody. I hope you are too!”