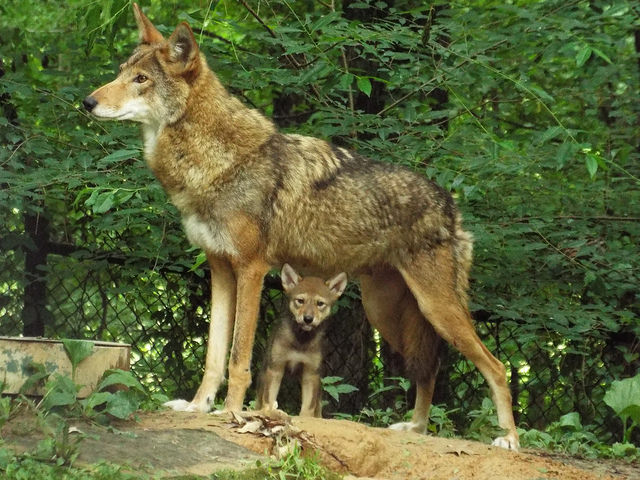 On March 21, 2017, the United States Senate overturned a rule from the professional wildlife management agency and chose to sanction the killing of both wolf pups in their den and hibernating bears on national wildlife refuges in Alaska.

In Alaska, national wildlife refuges span more than 73 million acres, including the Arctic National Wildlife Refuge, which, up until yesterday, was the largest land-based protected area in the U.S.

The original U.S. Fish and Wildlife Service ruling prevented aggressive hunting practices from taking place on the land, which include shooting or trapping entire bear, wolf, or coyote families while they are in their dens with their cubs and pups. It also made it illegal for hunters to use airplanes to scout and kill brown and black bears, as well as use trapping methods like steel-jawed leg hold traps, wire snares, and luring bears with food so that they could be shot at point blank.

Despite years of relentless work by over 70 groups, including many from the Alaska area, the original ruling to protect these majestic, wild creatures will, tragically, not be upheld.

These unsporting hunting practices, which will soon be legal in national wildlife areas in Alaska—regardless of the fact that they are on a category of federal lands that were specifically created to protect wildlife and conserve species and habitats in their natural diversity—are not permitted in almost every other state in the U.S.

Steel-jaw traps are banned or heavily restricted in 85 countries and many states in the U.S., as they inflict excruciating pain not only on the targeted animals, but also on any other animal or human that unknowingly sets off the trap.

These traps do not kill on impact—they snap tightly shut on the leg or other body part when the victim stands on it, so it is unable to set itself free. The pain the animals endure is likened to having your hand caught in a slammed car door, however jaw traps also cause deep puncture wounds to prevent the animal from writhing around and escaping.

Sadly, the trapped animals often experience horrendous prolonged and unimaginable suffering if the traps are not regularly checked, and many will slowly die from dehydration, starvation, or infection. Click here for a further description.

In Alaska, there is currently no law that determines how regularly these traps need to be checked, so animals could be left for days or weeks.

Leg hold traps, which are also banned in many countries around the world, are also known as restraining traps. They are used primarily for foxes, coyotes, wolves, and lynx. These traps, which consist of a metal footplate with curved jaws and powered springs, catch the animal by the limb as it passes through it.

The animal is then immobilized and unable to eat or care for their babies. They are left trapped where they are, as easy prey for predators, and without shelter from harsh weather conditions.

Many become so desperate to escape and return to their family that they attempt to chew or wring off their trapped limb with many breaking their teeth or bones in the process. When they don’t return, their babies are left alone, unable to fend for themselves, and can often die.

The new ruling that permits these hunting methods was passed with a majority of Republicans voters, resulting in a vote of 52 to 47.

Last month, the House of Representatives passed a similar legislation, which again was due to a Republican majority.

From here, this new bill will go to President Donald Trump to be signed into law, and the legislation then blocks the administration from ever being able to issue a similar rule on the topic.

This means that from then on, the authority to prohibit these hunting methods will be solely in the hands of Congress.

Wayne Pacelle, president and CEO of The Humane Society of the United States spoke of the ruling saying, “What the Senate did today should outrage the conscience of every animal lover in America,” adding, “The passage of this bill means that we’ll see wolf families killed at their dens, bears chased down by planes or suffering for hours in barbaric steel-jawed traps or snares.”

Last year, while trying to protect the land, Dan Ashe, director at the time of the Fish and Wildlife Services said, “Public lands are not game farms managed for a slice of their diversity for the benefit of a few people who would call themselves hunters. Nor are they places where we can or should allow the practices authorized under Alaska’s ‘intensive predator management’ initiative.”

Alaska Senator Dan Sullivan argued, that repealing the rule through a congressional resolution is important to the “principle of federalism,” saying, “this rule is about subsistence.”

Although many of those who backed the new hunting rule claimed that this was an Alaskan state rights issue, a recent poll by Remington Research Group found that the majority of Alaska voters oppose these inhumane methods by a 2-1 margin.

Just last year, researchers found that the East Fork Wolf Pack, one of the longest-studied wolf packs, may have been entirely wiped out due to aggressive hunting practices in Alaska.

Although this law will soon be signed in by President Trump, there are still ways to reduce the suffering for these animals, and the main one is to stop buying fur products and to encourage others to do the same

We can also spread awareness about these hunting techniques, send letters to congress, and sign petitions to end the horrific torture caused by these hunting practices.

Many animals are hunted for their pelts, and if there is no demand for them, there will be less reason for hunters to trap them.

Many animal rights groups are calling for a ban on inhumane traps, and since 1958, over 100 countries have outright banned leghold traps, so although the situation is sickening for animal lovers, there is hope.

“Alaska is home to some of our nation’s most iconic wildlife, and these animals deserve to be treasured and conserved for future generations, instead of subjected to cruel and unsporting trophy hunting and trapping methods.” ~ Nicole Paquette, vice president of wildlife for The HSUS.

Image: Land Between the Lakes/Flickr