The Red String of Fate & the Twin Flame Connection. 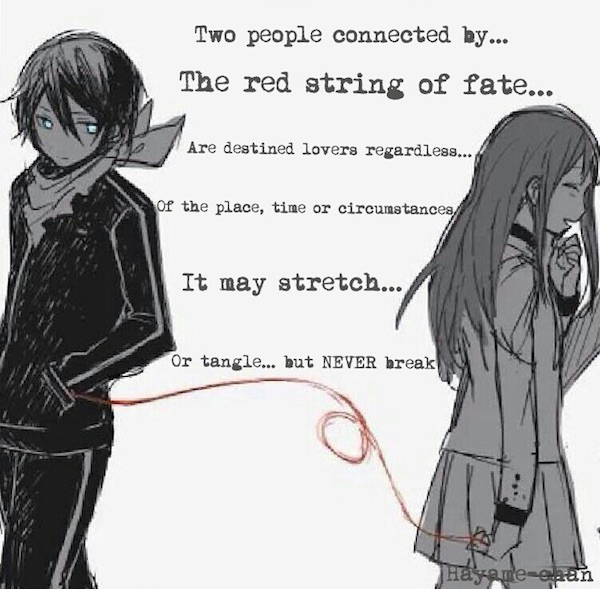 “We signed up together to do this dance before we were born.” ~ Annie Kagan

Some things are just meant to be.

Many of us believe, even if we struggle at times, in the idea of soulmates. This is a term we’ve all heard before, yet it doesn’t define only romantic relationships. A soulmate can be a friend, a family member, or a pet that we feel a deep spiritual connection with.

For lovers, there is no higher ascended relationship than that of the twin flame.

It’s one of the most complicated, yet beautiful connections that we can experience in this lifetime. Some still question the validity of this connection, or think that it was invented by us. However, the concept is present in many cultures and has been for thousands of years.

It’s said that the story of Adam and Eve is the original twin flame connection.

In Christian belief, God created Adam and then created Eve from his rib, essentially splitting one being into two separate bodies. While we could debate the religious connotations of this story, the point is that the belief of one soul being split into two bodies is one as old as time itself.

In Egyptian lore it’s the tale of Osiris and Isis—and only a God being able to marry a Goddess. Together, these two ruled Egypt until the jealousy of Osiris’s brother Seth became so vicious that he killed his brother by nailing him in a coffin and throwing it in the river. Isis knew before being told that Osiris’s spirit had left this earth. She set off to find his body so that she could give him a proper burial, ensuring his soul could ascend to Amenti.

Even in death their spirits were connected.

We have a difficult time believing in something that we can’t use logic to define. While we may not know why two people fall for one another, we can, in many ways, explain the emotions of love.

This concept is the one of a soul connection that goes beyond any sort of time frame or rationale.

The Chinese culture has a name for twin flames that depicts the powerful relationship these two share. According to this belief, a red string of fate is tied around the pinky fingers of those destined to be together, and time can stretch or tangle the thread but, in the end, they are destined to come back together.

In some ways it’s easier to say that this is just another New Age concept that lacks any basis in fact, yet its root is one that is shared across many cultures. We all have another that shares our soul.

This is where the term “finding our other half” comes from.

In Greek mythology, humans were originally created with four arms and four legs, but Zeus, fearing their power, split them in half, sentencing them to spend the rest of their lives searching for their other half.  Whether we believe in the concept of finding our other half or not, the theory of being split in half is a belief that reinforces the twin flame union.

Yet, there is a deeper understanding to this concept of being split in half than to purely spend life searching for our other half. Of course, many reject the superficiality of “our other half.” The reality is, a coming together or union of the twin flames will only occur once each flame comes into their own power and realizes they are whole on their own.

Twin flames are destined to come together in this life, not just for their own evolution, but for that of the planet. Many flames are part of the 144,000 light workers that came to earth to raise the vibration of the world and to assist us in raising our overall consciousness.

As amazing a connection as it is, much work has to be done independently by each person before they join together and carry out whatever life purpose they agreed to before being born.

The beautiful thing is—I believe it will happen.

No matter what happens in this life, what paths we may travel, we always have a red string connecting us to our twin flame. Nothing we do can break that. Twin flames are a union that is created in the spiritual world. Nothing in the human world can ever break it.

We all have our one—our person that was created just for us in this lifetime. While we can debate its authenticity, the truth is there are just as many names for this type of love as there are for God.

It’s a union beyond the tangible. Because of that, time is irrelevant for twin flames.

This belief is presented in Chronos versus Kairos. Time is relative. Minutes and seconds are inconsequential, as everything has its season. We are coming to a place where more and more twins will be coming together in this lifetime and that is because the world is counting on us.

We are born into bodies, genders, and races for a specific reason. It’s not our job to question it, or attempt to come up with a logical explanation, but rather to look for the lessons we are being shown.

What areas are we continually being challenged to review? This is where our purpose lies. It is in this place, tied by the red string of fate, where we will come together with our twin flame.

Together, quite possibly, we will change the world.