Oscar Wilde on How to Be the Most Ourselves. 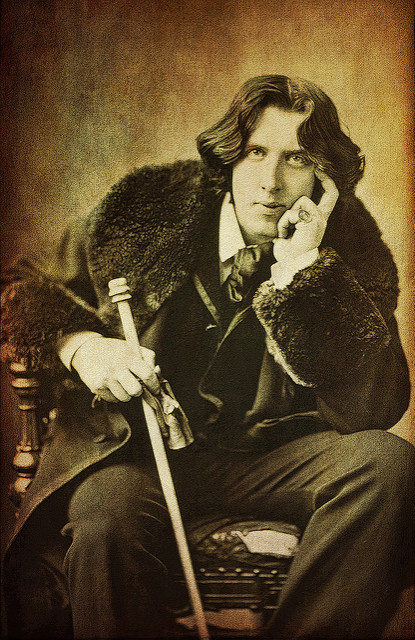 After doing a series of pieces on the life and work of Virginia Woolf, my newfound literary curiosity has led me to yet another prolific writer of the late 19th century: Oscar Wilde.

I’ve never really been much of a reader of fiction, at least not until quite recently. I like the writer to tell it to me straight, rather than soften me up with imagery and lofty metaphors—but as I continue to cultivate my own writing voice, I am finding a deep appreciation for the art of storytelling.

There is something quite profound and subtle about being able to convey a powerful message through the medium of narrative. It’s like we’re painting a picture and delicately inserting snippets of meaning into different strokes, so as to have it all come together as one unified creation. It’s really a beautiful process, and I’ve come to be much more grateful for this form of expression than I have been in the past.

I recently picked up Wilde’s much acclaimed novel, The Picture Of Dorian Gray, which is the only novel that he ever wrote. I also had the opportunity to ask out the pretty girl who works at the bookstore, which I felt pretty good about, but that’s a whole other story.

I’ve only just begun the book, and I am already blown away by it. (Let me just note that Oscar Wilde looks exactly like a male version of Virginia Woolf, which is super weird, but kind of makes sense.) It’s hard to even call it fiction, because of how much of himself he puts into his writing, which interestingly enough has a lot to do with what the story is about.

The story is that of an artist who becomes obsessed with a young man who he is painting. The tale begins with a playful exchange between the artist, a friend of his, and Dorian Gray (the muse).

Wilde cuts right to the chase:

“Because to influence a person is to give him one’s own soul. He does not think his natural thoughts, or burn with his natural passions. His virtues are not real to him. His sins, if there are such things as sins, are borrowed. He becomes an echo of someone else’s music, an actor of a part that has not been written for him. The aim of life is self-development. To realize one’s nature perfectly—that is what each of us is here for. People are afraid of themselves nowadays. They have forgotten the highest of all duties, the duty that one owes to oneself…”

We are here to uncover our truest nature, which cannot be achieved as long as we remain susceptible to influence. Of course, there is no avoiding influence, for it is embedded in the very fabric of being—but perhaps if we can inquire deeply enough into our own psyche, then we can discern between that which we actually are and that which we have been influenced into thinking we are.

It is not about being without any kind of cultural conditioning; rather, it is a process of understanding the manners in which we have been conditioned and doing everything in our power to align ourselves with something deeper, something intuitive, something that is entirely transcendent.

We are discovering our ethos, our most heartfelt longings, the desires that rest within the deepest dimensions of our own soul, and we do this through bringing awareness to that which is being imposed upon us by others. We might only reveal the truth of ourselves through shedding light on that which is false.

This is what it means to be an individual.

“I believe that if one man were to live out his life fully and completely, were to give form to every feeling, expression to every thought, reality to every dream—I believe the world would gain such a fresh impulse of joy…We are punished for our refusals. Every impulse that we strive to strangle broods in the mind and poisons us. The body sins once, and has done with its sin, for action is a mode of purification…”

We are talking about the vast multitude of constraints and pressures that rest upon the shoulders of the individual. To participate in a civilized society we must abide by its rules—which is of course rather necessary—but these rules invariably suppress the broad and ever-extensive emotional field of the individual. In that, it is important to give credence to the underlying impulses that culture might deem as nefarious or unlawful.

There must be some degree of balance between the individual and the collective—and if this balance fails to be met, either on a psychological level or a cultural level, then we descend into chaos. This has been proven across all pastures of history, and it certainly has been the case in my own experience.

We cannot ignore the forces that move most deeply within ourselves, nor can we neglect the influences that fluctuate around us, at least not for very long. In order to find truth, which is to say in order to unveil the truth that serves the highest purpose for both the person and the society in which the person dwells, then we are to cultivate this balance inwardly, delve into that holy space of creativity and love that exists within ourselves.

“For nearly 10 minutes, he stood there, motionless, with parted lips, and eyes strangely bright. He was dimly conscious that entirely fresh influences were at work within him. Yet they seemed to him to have really come from himself. The few words that Basil’s friend said to him—words spoken by chance, no doubt, and with willful paradox in them—had touched some secret chord that had never been touched before, but that he felt was now vibrating and throbbing to curious pulses…”

Gosh, now Oscar’s got me vibrating and throbbing in curious ways.

This is the kind of writing that I not only enjoy profoundly, but that opens up pathways within my own mind that implore me to think about things quite differently. It is really an exercise in novelty, an expansive process of inward exploration, to read the likes of Oscar Wilde, for we are truly getting insight into the greatest minds in human history to take such literary excursions and have so much to gain both existentially and artistically in doing so.

There is something within artists that calls upon them to carve the path for human progress. Like many others, Oscar Wilde was demonized by the masses and died destitute at a relatively young age—and perhaps that is the price of innovation.

There is something nested within the very psychology of high-level creators that implores them to go against the curve, to challenge the established order, to delve into the chaotic abyss and bring back something of use to the rest of us. Perhaps it is because of this that people like Oscar Wilde have so much to teach us about what it means to truly be ourselves—to be fully actualized individuals.

For such teachings, I am indebted to the artists that have come and gone like flashes of light through the vast waves of time.