Mantra: the Power of a Word. 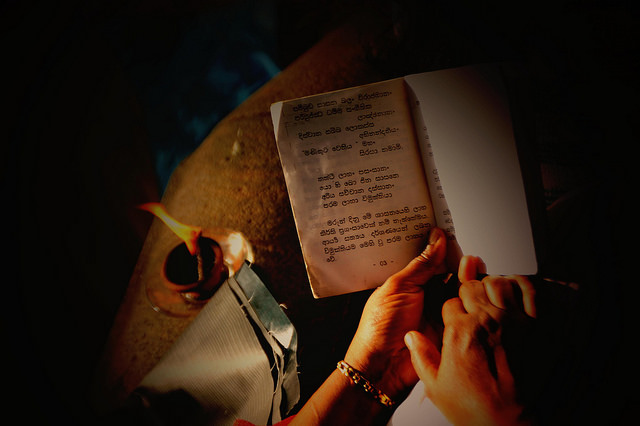 New research has shed light on how the silent repeating of a word—any word—can have profound physiological benefits.

In a 2015 study in the Brain and Behavior journal, the silent repetition of the non-descript word “one” was found to globally calm all parts of the brain in 23 volunteers who had never meditated before.

In addition to reducing cortical brain activity across the brain, there was an enhanced reduction in activity in the part of the brain called the “default mode network,” which is responsible for self-judgement.

While this research helps explain some of the benefits of prayer and meditation, which typically employed the silent repetition of a word or series of words used for thousands of years around the world, it highlights the beneficial use of a single word or mantra.

The origins of mantra.

The word mantra comes from two Sanskrit root words, man and tra. The word “man” means mind, and “tra” means tool, thus giving the word “mantra” the definition of mind tool or mental instrument. The earliest use of mantra appeared some 3,500 years ago in the form of chanting extensive prayers or hymns.

Over time, the use of a mantra (or single word) evolved as a sit-down meditative technique to calm the mind, enhance self-awareness, and develop one’s mental, physical, and spiritual potential.

Mantra meditation has been shown to produce powerful physiological changes, such as lowering cortisol levels, enhancing endurance, reducing the perceived intensity of a workout, improved concentration, mood stabilization, the lengthening of telomeres which is linked to longevity, and much more.

>> Learn how to meditate here—or here.

The Vedic tradition employed bards or pundits who preserved the historical record by memorizing and reciting the Vedic hymns, long before they were first written, as one of the oldest written texts: the Rigveda—an ancient Indian collection of Vedic, Sanskrit hymns.

Today, most spiritual traditions still sing, chant, and choir regularly, which studies now show has a profound effect on quieting or emptying the mind. When the cortical activity of the brain silences, we enter into a non-thinking state. In this state, when the mind is not focusing on any one thing, the mantra, hymn, chant, or prayer allows the mind to be aware of everything without the distraction of thinking—which, of course, requires stimulated brain activity.

All of us have had a glimpse of this when we sing our favorite song. We are not thinking the words of the song—they just come. The words come effortlessly, without thinking, and often the thoughts never come—only the words and the joy!

The eye of the hurricane.

Two of my favorite Vedic sayings help us understand this effect. The first is, “Do less and accomplish more”—and the second is, “Do nothing and accomplish everything.” To explain these, let’s use the analogy of a hurricane, where powerful winds spin around a silent center. The winds represent the stress in our lives, and the eye represents a mind in meditation or prayer.

Most of use tend to live in the winds of the hurricane, navigating daily stressors, and dodging major obstacles in the winds of the storm. As we begin to train the brain to become still—using mind tools like mantra, chanting, or prayer—cortical brain activity quiets down, and we naturally bring the calm into activity, allowing us to do less and accomplish more.

In a sense, the more we train the mind to be still, we create a bigger eye of the storm. The bigger the eye, the more powerful the winds, and the more productive we can be with less stress.

In time, instead of simply bringing the calm into action (and doing less and accomplishing more), we begin to function from the calm, non-thinking mind place within the eye of the storm, where we can begin to do nothing and accomplish everything. In this state, the reference point for action is from the eye—the calm—not from the winds or the stress.

Hailing from the eye of the storm allows us, in time, to do nothing and accomplish everything. In nature, this effect may be best demonstrated by the sun, which sits silently appearing to do nothing, yet accomplishing everything.

The notion of this effect captivated me many years ago and was the motivation for writing my first book, Body, Mind, and Sport, where we did brainwave research aiming to reproduce this effect, known to athletes as the “runner’s high.”

The ability to “do nothing and accomplish everything” may have been best described by Roger Bannister, who was the first man to break the four-minute mile. After his record-breaking run, he said, “I felt no pain or strain. I felt like I was going slow—the world seemed to be standing still, as if the world did not exist.” Yet, he was running faster than any man alive.

It is safe to say that his experience was one of doing nothing and accomplishing everything! For the rest of us mortals, it is a work in progress.

Make sure you enjoy the journey!