These 7 Wild Weeds have unexpected Health Benefits—and you can Find them in your Yard. ~ Brigitte Mars 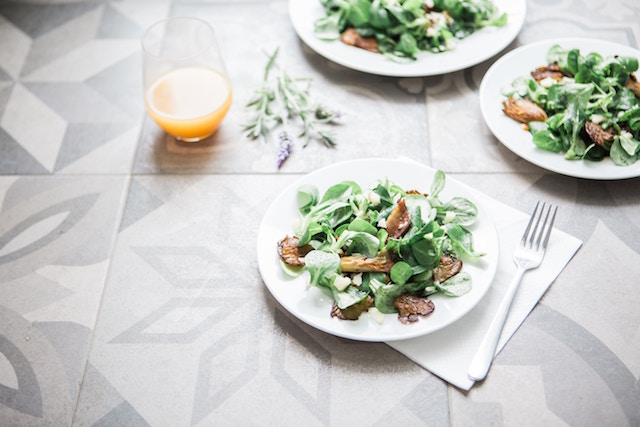 “What is a weed? A plant whose virtues have not yet been discovered.” ~ Ralph Waldo Emerson

In the early ’70s, I lived in a teepee on a commune in Reynolds, Missouri.

Weekly, I would visit an elderly neighbor, who generously showed me that most of the so-called “weeds” coming up in gardens were more nutritious than the plants we were intentionally cultivating. She taught me that not only were these plant allies free, but they were also easy to grow, requiring less water and often contributing to the growth of half of what is found in a garden.

Wild foods survive despite being stepped on and without being fertilized or watered each week. They can also impart us with strength and vitality.

It is ironic that people work so hard to eliminate weeds, but then turn around and pay top dollar for imported foods, as weeds are the ancestors of many of our store-bought foods. Many were brought to America to be eaten, and in various cultures, are still considered viable vegetables.

Wild weeds are nourished by rain, sun, moon, and wind.

When we pick these “weeds” from our gardens, we can savor the freshness of a salad or green drink made from plants collected five minutes before consuming. Wild foods are so mineral dense that they support health and satisfy us on a deep, cellular level. They can even decrease cravings, helping the body to become more alkaline.

Instead of turning to pesticides, let’s choose to enjoy the sunshine and breathe fresh air as we gather these weeds—which can also make even room for other plants in the garden!

Here’s a list of some of the most beneficial weeds we can harvest. 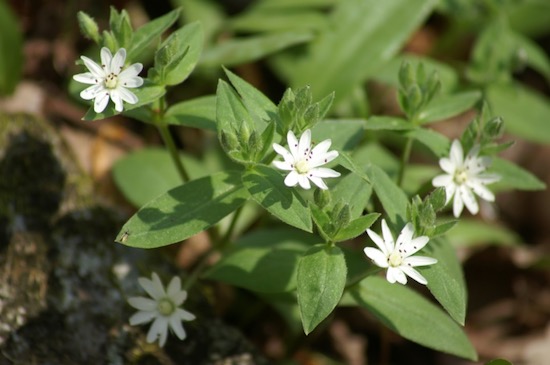 Chickweed (Stellaria media) is an herb that has traditionally been used to strengthen frail people. Delicate and delicious, it is a member of the Caryophyllaceae (pink) family and native to Europe. More than 30 bird species, including chickens, are known to eat this plant. The genus name, Stellaria, refers to the star shape of the calyx that holds the flower. Sometimes chickweed is referred to as starwort.

The leaves, flowers, and stems can be included in salads, raw soups, and marinated dishes. It is known for its high Vitamin C content. It keeps well in the refrigerator for up to a couple of weeks.

It has soothing and anti-inflammatory properties and has been made into a tea for bladder irritation, bronchial irritation, and ulcers. It is an excellent salve ingredient, helping to soothe everything from diaper rash to psoriasis.

Chickweed actually makes an excellent ground cover, as it grows outward instead of upward. Its very presence indicates fertile soil, and chickweed in turn helps the soil retain its nitrogen content. 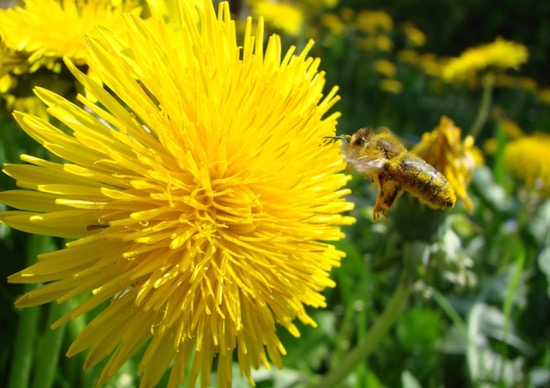 Dandelion (Taraxacum officinale), is recognizable by almost everyone. It’s a member of the Asteraceae (daisy) family. The genus name, Taraxacum, is from the Greek, and means “the remedy for the disorder.”

Though most people regard this plant as a nuisance, it is rich in uses. The leaves are edible in the springtime, before the plant flowers and becomes too bitter. It is high in iron and beta-carotene.

The leaves act as a natural diuretic. Most chemical diuretics deplete the body of potassium, but dandelion greens are actually rich in this mineral.

Dandelion blossoms can be separated from the calyx and sprinkled on salads. The flowers contain lutein, a nutrient beneficial for the eyes.

Dandelion roots are edible. I like to dig them up, scrub, chop, add a bit of olive oil and nama shoyu, and then dehydrate them a bit to soften them. Delicious!

Dandelion root tea has long been used to improve skin conditions such as acne and eczema and to improve liver function. 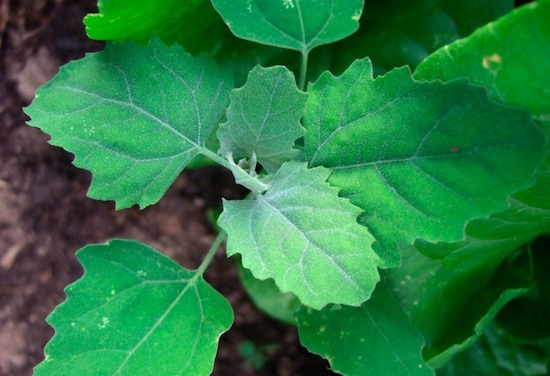 Lambsquarter (Chenopodium album) tastes like spinach but is much easier to grow and is even more nutritious. A member of the Chenopodiaceae  (goosefoot) family, the goosefoot shaped leaves of this abundant plant have long been used as a nourishing food during times of war and famine.

The species name, album, means white, and refers to the whitish beads of moisture that form on the top of the plant. Lambsquarter is considered a remedy for anemia because it is rich in iron.

The seeds can also be collected, sprouted, or used as a grain substitute. 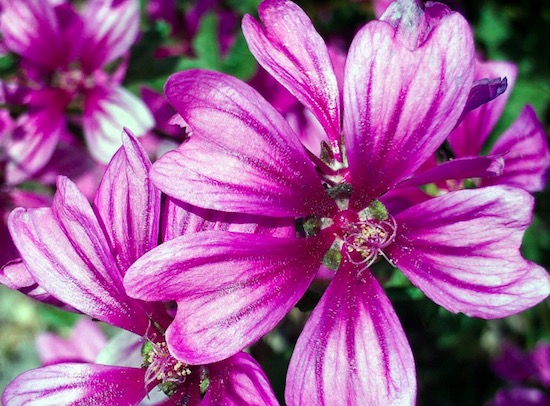 Malva (Malva neglecta) leaves are soothing and anti-inflammatory. A member of the Malvaceae (mallow) family, Malva is a Latin word meaning “soft,” while neglecta means “neglected.”

Malva is native to Asia, and it is sometimes referred to as “cheeseweed,” as the tiny seeds resemble an old-fashioned round cheese wheel.

Malva leaves can be eaten raw or added to raw soups to thicken it with their rich mucilage content. The delicate pink and white flowers are a lovely and edible addition to grace the dinner plate. The seeds are edible and can be eaten raw or can be pickled. The high moisture content of the seeds is used to moisten the mouth when water is scarce.

Malva leaves have served as a traditional medicine as tea for sore throats and ulcers. They also make a simple poultice for treating skin rashes, burns, and insect bites. The leaves are rich in beta-carotene and are included in teas and syrups for coughs and irritated lung conditions. 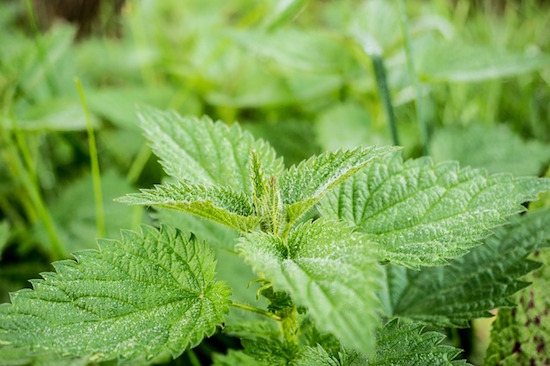 Nettles (Urtica dioica) are very high in iron, building the blood and benefiting the kidneys. The genus name, Urtica, is Latin and means “to burn”—which is apt, as nettles are probably best known for the stinging hairs that cause pain upon touch. This plant is part of the Urticaceae family.

In the hairs lies formic acid, a substance also found in ant bites. But there are actually some health benefits to the stings from this plant, such as in relieving arthritis pain. Young nettle shoots are edible if pureed or juiced, and the stinging hairs quickly lose their “bite.”

Nettles’ high content of beta-carotene and Vitamin C helps to strengthen mucus membranes and stabilize mast cell walls, which helps to stop the aggravating cycle of inflammation. This basically means that it requires lots more pollen to cause histamine release—and the itching and sneezing that accompanies this.

Most people will want to wear gloves and use scissors when collecting nettles. Only the young plants should be consumed, as they become irritating to the kidneys if they’ve started flowering. 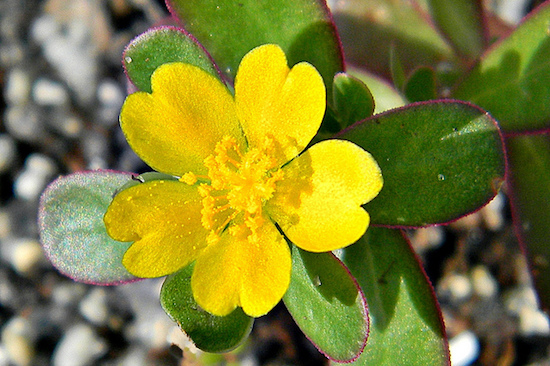 Purslane (Portulaca oleracea, P. sativa) is a member of the Portulacaceae family, and though its creeping succulent leaves seem tenacious, it is truly a valuable plant.

It is thought that the genus name, Portulaca, is from the Latin “porto” and “laca” that together mean “milk carrier” in reference to its juicy liquid. The species name oleracea is Latin and means “potherb.” It also is known as summer purslane, Indian cress, pussley, wild portulaca, verdolaga (Spanish), and loni (Sanskrit).

Purslane was originally cultivated as a salad and potherb, and was one of Gandhi’s favorite foods.

Purslane is high in the omega-3 fatty acids and is helpful in protecting the heart and lowering blood pressure and cholesterol.

Not only does it make a fine salad herb, but is wonderful in raw soups like gazpacho or used in place of okra in recipes. Purslane’s dried seeds can also be ground up and used as a grain alternative.

Purslane makes an excellent edible ground cover, and was once believed to offer protection from evil spirits. 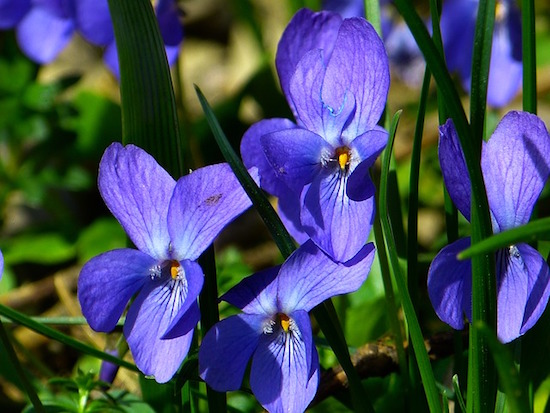 Violet (Viola odorata), a member of the Violaceae (violet) family, can be found by looking deeply into shady areas for the heart-shaped leaves and brilliant purple flowers that characterize this plant. We might catch their beautiful aroma before we even glimpse them!

Violet leaves are edible all year round, but the flowers are in their prime in the spring. It is easy and elegant to add a sprinkle of raw violet blossoms to any dish we serve. The leaves and flowers are both high in Vitamin C and an esteemed remedy for coughs, fevers, and lung complaints such as bronchitis. The ancient Athenians used violets as a medicine to “moderate anger.”

The smell and flavor of violets can help comfort those who are grief-stricken.

1. Make a salad. Except for nettles, which must be pureed, all of the aforementioned greens (when young, before flowering), may be included in a salad.

3. Blend clean chopped greens (except nettles) with some soaked nuts to make a pâté. Season with lemon, garlic, salt, and chopped onion to make a dip.

4. Use greens, as you would spinach, in making raw lasagna.

Author’s note: When trying a new food for the first time, start with only a moderate amount until you can discern its affect upon your body. 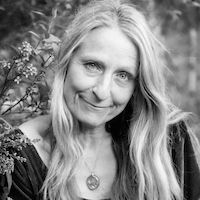 Brigitte Mars is an herbalist and nutritional consultant of Natural Health with almost fifty years of experience. She teaches Herbal Medicine at Naropa University, and The Sch… Read full bio