Why “Spiritual Archery” is the Vedic Science of Transformation. 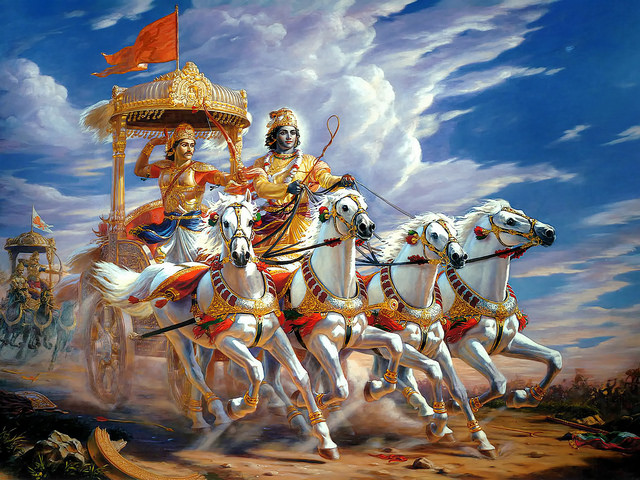 The Vedas are considered to be the oldest written recordings that describe—often in metaphors—ancient principles, practices, and spirituality.

There are four major texts in the Vedic literature:

Additionally, there are Upavedas, which are basically applied science and supportive knowledge for these four texts. Ayurveda is an Upaveda of both Arthava Veda and Rig Veda.

Dhanurveda, the topic of this article, is an Upaveda of the Yajur Veda. (1) Dhanu literally means “bow,” making the word Dhanurveda literally mean “bow knowledge.” You may have heard of the yoga pose (or asana), Dhanurasana, or “Bow Pose.”

As all Vedic sciences are primarily teachings for the development of full human physical, mental, and spiritual potential, it would be a mistake to relegate Dhanurveda as a science of only weaponry and battle strategies.

The Vedic warriors who were masters of Dhanurveda—such as Ram, Lakshman, Arjuna, Krishna, and other Vedic heroes—represent beings who have achieved their full spiritual potential, superior physical abilities, and fearlessness through mental and emotional freedom.

A true warrior with full knowledge of Dhanurveda was considered invincible. They would be fully alert while in deep rest, completely calm and fully aware in the field of battle, all while fighting only for the highest purpose with no attachment to the outcome. They were established in being while they performed action. They were invincible on the battlefield.

During my studies in India back in the ’80s, I was asked to write a thesis on Dhanurveda, the Veda of physical, mental, emotional, and spiritual transformation. Based on my thesis, I called my very first audio-cassette course “Invincible Athletics,” in which I attempted to bring these principles into the world of sports performance. The “Invincible Athletics” course was the precursor to my first book on athletics, Body, Mind and Sport, which included research that we conducted proving the principles of Dhanurveda.

The Buddhist monk, Bodhidharma, who brought the original martial arts to the East, brought the teachings to India before he made his way to China. In India, he introduced the understanding of Marma—the vital points on the body that were said to bring certain death. This was the precursor to Marma Therapy in India and acupuncture in China.

Today, many of these martial techniques are being revived as part of the study of Dhanurveda.

No study of Dhanurveda would be complete without the study of the bow or archery. Shooting an arrow is a powerful metaphor for the transformation we all long to experience.

Perhaps the best premise for Dhanurvedic principles is found in chapter two, verses 42-48 of the Bhagavad Gita. In these verses, Krishna, who represented the highest ideals, and Arjuna, who was the great archer, were driving their chariot into battle to fight their deceitful cousins, who had taken control of the kingdom through trickery.

Arjuna took pause, as he was suddenly conflicted about killing his cousins. He knew that if his cousins became rulers, the people would suffer for generations. He had to stop them for the greater good. But to do so, he was being asked to go into battle and kill his family—the cousins he grew up playing with!

Conflicted, Arjuna asked Krishna for advice. Krishna simply said, “Yogastha Kuru Karmani,” which means, “First establish being in yourself—and then, and only then, perform action.”

What this meant was that when we take any action, it cannot be from the mind in the world of “right and wrong,” emotion, or judgement. We must act from that place of being—deep silence and knowing—where there is no “this or that,” no “should or shouldn’t.”

Once he was able to remove his mind and emotions and establish himself in being, he was able to act and perform the action without attachment. His action ultimately brought balance back to the kingdom.

The bow, from the perspective of Dhanurveda, offers us a great tool to experience the being or silence that proceeds truth or a transformational action. The bow became the source and course for mastering Dhanurveda. The power of the bow spread throughout Asia as martial arts, such as Japanese Kudo.

When you fully draw a bow back in an attempt to shoot an arrow, you must bring the bow and the arrow back fully. You must hold and establish that arrow and bowstring into a state of absolute stillness or silence.

The slightest movement of the bowstring will create an exponentially distorted flight of the arrow. To create a profoundly transformational shot, you must establish yourself, the bowstring and arrow in being, silence or total stillness—and then, only then, shoot the arrow or perform the action.

Pulling back the bow fully is a metaphor for pulling the mind back into a total state of non-thinking—as if you were in a meditative state while fully engaged in the world or action. Holding the bowstring and arrow in a state of stillness requires mastery of the mind to avert distraction from the outside world, the target—or, as the Gita put it, “the fruits of his actions.”

In the verses of the Gita mentioned above, Krishna also commanded Arjuna to not be attached to the fruit of his actions. He must be completely still, astutely aware, and steeped in the process of his actions.

The minute we let the mind wander, become distracted, or think about the outcome, the mind instantly attaches itself to the fruits of that action. The mind will seek the reward, the satisfaction of hitting the target, the return on investment, or become addicted to the fruits of one’s actions. Soon, the mind seeks a dopamine-rich reward chemistry to be the result of all action.

In time, all action is based on an expectation of some reward, return on investment or fruits. The ability to function and shoot or act from that place of being is lost, and every action becomes a manipulation of the environment to deliver a reward.

Once established in being with the bow or with the mind fully “pulled back,” the release of the bowstring sends the arrow into a transformational flight. The arrow, the thought, the action released from this state of mindlessness is free of attachment. It is free of judgment. It flies without concern of what people think; it requires no approval or attention from others. When it hits the target, it penetrates at the deepest possible level.

This concept has been recently tested in a study that measured two different types of giving:

>>> Do you give to get? Read more on hedonistic versus eudaimonistic giving here.

The battle that was described in the Bhagavad Gita, called “The Great Battle or Mahabharata,” was also a metaphor for what takes place in our minds on a daily basis. Many of us are deeply affected by what other people think, driven by accomplishments, and overwhelmed with a mind full of incessant thinking.

The bow is used in Dhanurveda to teach us how to use the two major life principles that define all of the other Vedic sciences: to act from within, without a care from without.

Stay tuned for more blogs on the principles of Dhanurveda: the Veda of Transformation.

A Vedic Secret: The Truth about Happiness.