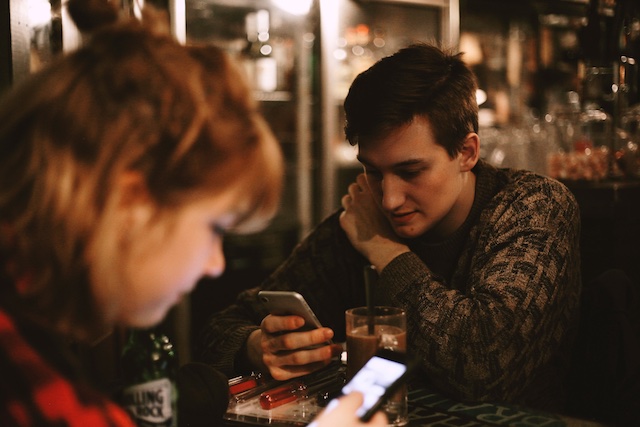 According to a New York Times report, both teens and adults check their smartphones 150 times per day (or every six minutes), and send an average of 110 texts per day.

For many teenagers these days, texting is passé, so they have upgraded to platforms like Snapchat and Instagram—suggesting that these numbers may not represent actual usage.

Around 46 percent of smartphone users say that they “couldn’t live without” their phone, and one-in-three would rather give up sex than their cell phone.

Cell phone addiction is an insidious and growing problem around the world.

In a study at the University of Maryland as part of The World Unplugged project, researchers evaluated students from 10 different countries. They found that the clear majority experienced distress when they went without their cell phones for a mere 24 hours.

In another large-scale study evaluating more than 2,500 college students, 60 percent of them admitted being addicted to their cell phone.

With 83 percent of Americans owning a cell phone, let’s face it, they are here to stay.

Learning how to manage the risks, particularly with our children in mind, is one of America’s new challenges.

Studies suggest that excessive online activities are linked to sleep, learning, social, psychological, and focus disorders, as well as violence.

A recent Huffington Post article reported the following in regards to teenage girls:

Research shows that teenagers use of social media goes hand in hand with increased teen depression.

Smartphones and social media activate the same brain centers as gambling, sex, exercise, eating, and other addictive behaviors. All of these activities stimulate dopamine in the reward center of the brain. This reward center tends to be highly receptive in teenagers.

Smartphones are, in many cases, used constantly throughout the day. This delivers a constant reward brain chemistry at levels hard to match with any other addiction. Addictive behavior is understood as a habitual drive or compulsion to engage in behaviors, despite the negative consequences.

As a result, kids are experiencing self-esteem and self-confidence issues, all the while lacking in social skills and personal interactions with others. Why strike up a conversation with your neighbor, friend, or classmate when it is easier and quicker to get a dose of dopamine by grabbing your phone or tablet?

Forcibly removing kids from their online social network has shown to trigger symptoms that are normally associated with drug/alcohol/nicotine withdrawal. According to a study published in the journal Cyberpsychology, Behavior and Social Networking, “Sudden cessation of online social networking may, in some chronic users, cause signs and symptoms that at least partially resemble the ones seen during drug/alcohol/nicotine abstinence syndrome.”

Studies have repeatedly shown that excessive television usage and screen time is associated with early childhood delays in cognition, language, and social and emotional skills. This was, in part, related to a lack of parent/child interaction, because one or both parties were distracted by television or online activities.

The golden ticket, however, was the combination of active and positive parenting, along with less negative, inappropriate, or violent content.

Studies with adolescents have shown that cell phone abuse can interfere with sleep cycles, such as diminishing sleep time and poor quality sleep. Such sleep concerns were directly related to the amount of cell phone use in the evening.

Nighttime cell phone use may also inhibit the natural production of melatonin, which regulates sleep and detoxification.

Blue light, primarily emitted from LED screens on cells phones and tablets, are the specific ray of light that suppresses melatonin production.

Meta-analyses (combined data from hundreds of individual studies) confirm an association between exposure to violence in media and anti-social tendencies such as aggression.

Studies show that heavy screen time use by preschoolers may increase weight, as measured by body mass index (BMI). Researchers suggest that early screen time use may set the stage for further weight gain later in childhood.

Most experts are suggesting only one hour a day for children between the ages of two and five.

In one study with 250 college students from Stanford University, researchers found that social media and online activity was directly linked to the students being distracted, less able to filter out distractions, and more likely to be distracted by irrelevant information.

In another study, television and video game use was linked to a diminished ability to pay attention in class, memory deficits and poor sleep, along with a lack of creative imagination.

The results spanned from middle school kids to young adults, and were consistent with either television or video game use.

In the process of researching this topic, I interviewed my six children and what their experience of cell phone use was.

At the time of this writing, my kids are 14, 15, 17, 21, 27, and 29 years old. It’s almost as if they grew up in different yugas, because of the massively different cell phone and technology experience they each had growing up.

It is the generation of kids now in middle and high school that concerns me. I have two in the thick of this technological teenage experiment!

My youngest daughter, who is just finishing middle school, had the most amazing things to say.

Read my blog about what my kids had to say. Along with my children’s interviews, here you will find my 14-year-old daughter’s first blog post, where she shares her experience with social media and technology. Bravo, Gigi!

The consensus is that technology is here to stay and it is all about finding balance, maximizing the good in technology, and minimizing the bad. We cannot live in a bubble pretending it does not exist.

That said, I have some strategies that we have used to help manage our own in-house technological human experiment.

Here are some of my favorites that we use with the two kids still living at home:

Personalize Your Own Family Media Plan

The American Academy of Pediatrics has developed a very cool online guide to developing a personalized plan for your family and kids of all ages.

I would love to hear from my readers on this topic.

I do not claim to be an expert in this area, but I do see this problem regularly in my practice and at home.

Hopefully, this article will help the cause and continue to open the doors of awareness, so that we can find the best solutions to this modern problem and, ultimately, protect our children.