The Mind-Altering Lessons of my Ayahuasca Journey. 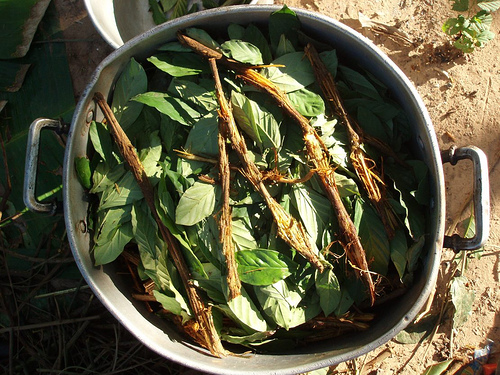 Ayahuasca. These days it seems as though everyone and their mother knows about “Mamma Aya,” and I don’t know if this is a good thing or a bad thing.

On one hand, it’s great because of the powerful healing that is to be offered by the mother of shamanic healing. On the other hand, it’s not so good because—like all things the Western world gets a taste for—we ruin it.

I hear so many stories of those who go to journey and return home traumatized. I hear of false shamans taking people’s money and leaving them to die in the jungle.

I’ve heard many other stories of miraculous healing and connection, and I’ve witnessed these in myself and others. Personally though, I can only share my own experience with Mother Aya, which was beautiful, humbling, and eye-opening.

I knew in my heart I was ready for my Ayahuasca experience well before I was presented with the option. She just sort of called to me, and I didn’t give it too much thought, because I don’t really partake in anything mind-altering beyond caffeine and some occasional sugar. So, I dismissed it as a random thought of my adventurous mind.

Several months later, she was beckoning again. That’s the thing with true shamanic medicine and using plant medicines as they are intended—they call to you when it’s time, and you know on a deep level there is work to be done. You don’t have to force it to occur. When the time is right, the way opens up. So, I decided I was ready. Mother had called to me, after all. I didn’t go searching for an Aya; she found me. I then approached the whole journey with a humble reverence for the sacredness of it.

I set my intentions around any healing I needed to experience and connecting with anything I needed to see in order to fulfill my soul’s purpose here on planet Earth. I fasted and then followed the strict diet going into the week up to journey.

On a cold winter night, I arrived on a trusted healer’s doorstep, where I would meet a magical man who was trained by an ancient lineage of Amazonian shamans.

He began the ceremony by giving us some rules. The two I recall were, “Don’t interfere with anyone else’s experience. Stay on your own mat and leave them be. You don’t know what’s happening for them behind the scenes. Don’t interfere.” And of course, who could forget, “Don’t die tonight.”

Well, okay. The rules sounded easy enough. I really wasn’t sure what the night was going to hold, but it felt right, and I was pretty confident about the not dying—although, I did have the thought in my head that if it’s time to go, this wouldn’t be a bad way to do it. Plus, I don’t fear death, so to me, saying “don’t die” would be akin to telling me not to travel to another dimension had I been given that option.

I sat in meditation as the medicine began working on my body. It started working on my stomach and intestines, where I carry the most physical issues, but I just sat with it as the medicine did its work. My husband was on the mat next to me, and as the plant took over, he was struggling with relinquishing his intellectual control. He was fighting to make sense of things, and—as per the rules—I was not to interfere.

Surprisingly, these were the most challenging moments of my whole journey.

Once the shaman began working on him, and I knew he was safe, I was able to surrender to my own journey. Mother gives us exactly what we need, and while my husband was getting his ass handed to him on the mat next to me, I was dropping into a deep, dark abyss of parallel timelines. Alternate realities? Perhaps. Past lives? More to the point, I believe.

Of course, I purged, as I think has to happen. It’s insane though that you can not eat all day, drink a tiny cup of “tea,” and end up expelling mass amounts of black tar-like liquid. It’s not easily explained to the rational mind, and even I have a hard time making sense of it here and now, in the light of day some months later. But truly, you get rid of some sh*t in that space.

Much of my journey was spent connecting with what I believe were my past lives. I reconnected with my own death several lifetimes over, and all were not happy endings. I connected with at least three lifetimes where my tragic end was at the hands of “the man,” “the church,” or “the system.” In other words, I was killed for my beliefs.

I came out of this journey with a deep understanding of the rage I carried deep in my solar plexus for much of my life. I came back with pieces of my soul that had been ripped away from me in those lifetimes. How healing is that?

I came back with an understanding that it’s okay for me to embrace my feminine softness and my compassion, because I am here to help bring healing to the world through my own healing work. There was nothing but beauty in my journey, along with some deep insights as to who I truly am.

Perhaps this was because I’ve dug so deeply into my trauma from this life that there was nothing shocking hiding in the shadows for me. Maybe wasn’t. I don’t claim to know what the creative intelligence that rules the medicine of Mother Aya is doing; that would be divinely arrogant of me.

The whole Ayahuasca experience is meant to be treated as a sacred event. It’s meant to be approached with a humble reverence for the power and intelligence held in this amazing plant. What this means is that the entire time—from the moment we decide we will embark on an Aya journey, until up to at least a week post journey—should be treated as sacred.

It means that approaching this experience with the arrogance and ego so often displayed by so many of us in the West is a mistake.

This plant is medicine, and it needs to be held in sacredness. It needs to be respected, not toyed with or treated as a hip vacation destination option for a bored and disillusioned demographic of people who have too much money and not enough connection to what life is about.

Don’t get me wrong, it’s my belief that Ayahuasca can help many of us heal—but only if we are truly ready and only if we approach the Mother with humility and reverence. Only if we keep her ceremony sacred. Approach with ego, and she will slap it out of you. Mamma Aya doesn’t play around; this isn’t a fun little trip that shows us all the pretty things.

5 Ways Ayahuasca can Heal our Minds.

Is Ayahuasca a legitimate Spiritual Path?