No, I Won’t Write about the Shooting in Las Vegas. 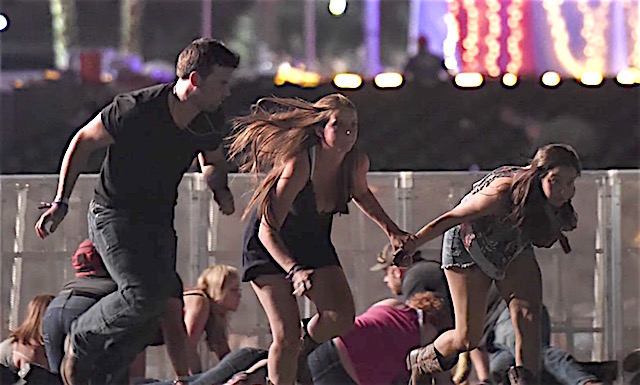 After all, what could I possibly say about gun violence in America that hasn’t already been said?

What statistics could I offer to change any minds? Which personal story of the wounded or dead could I share that would be the one that tips the scales?

I’ve often agreed with the sentiment that since we didn’t make drastic changes to gun laws after elementary school children were gunned down in Sandy Hook, we aren’t ever going to make them. Not in my lifetime, anyway.

“So,” I decided, “I’m not writing about this, because nothing’s going to change no matter what I do or say.”

Sure, I could write something up about how tired I am of hearing all the “thoughts and prayers.” Or mention my gag reflex when I hear our leaders—the same ones who won’t consider gun control measures and are, in fact, considering loosening gun restrictions even more—say with straight faces that their hearts go out to the victims and their families.

I could tell you that I don’t give a flying f*ck about moments of silence and whether or not the Empire State building will go dark in honor of the victims. I truly doubt that any of the victims’ last wishes were that we would offer a collective moment of silence in their name.

I could talk about how, when hearing praise for our first responders—truly remarkable people—all I can think about is how their courage is starkly juxtaposed against the cowardice of our congressional members.

Moments of silence can’t bring loved ones back.

But everyone already knows these things. Everyone already has an opinion, and there’s no changing it. So what’s the point of writing about how discussions about gun violence necessitate talking about who gets guns and why? What’s the value in discussing whether or not our country’s founders envisioned that one day, the Second Amendment would be interpreted to mean that anyone in America could equip themselves with military-style weapons with very little in the way of regulations or oversight?

I could share my opinion that the argument about whether to call him a “shooter,” a “gunman,” or a “terrorist,” is the least of our problems—and I’m generally an advocate for getting words right. Or, I could say that while I understand the desire to know what his motive was, in the end, it won’t help us get through this any faster.

I could even write about how done I am with this fantasy that God is up there somewhere, holding all the power, waiting for us to just pray hard enough before he makes changes. Until then, he picks survivors and victims like a child with green plastic soldiers. I could write about how I’m done with the requisite throwing up of hands, even as we’ve watched many other developed countries make their citizens safer through gun control measures. There are statistics and facts about these things, after all, and I could share them here, if I wrote about it.

But I’m not going to write about it, because someone else surely will. It doesn’t have to be me. I don’t have anything to add.

But the muse who sits over my shoulder, the part of me who made me write about Charlottesville when I didn’t want to and police violence when I didn’t think I had a right to kept tap-tap-tapping.

So I got my boys ready—“boys” is what I call my two dogs—and we began our walk. I thought I was getting away from the topic. Instead, the whole time, my muse and I argued.

My muse suggested that I could point out just a few of the ridiculous hypocrisies of our current administration. For example, how, in the name of safety, our administration is issuing travel bans against countries who they say harbor violence, while ignoring the truth of our own violent society. Or, how this administration plans to decrease the number of refugees we accept in this country, while telling us that a free society means people can not only own guns, but walk around with them, or even brandish them at a political rally—like Roy Moore demonstrated in the Alabama primary.

Oh, not just a gun. Lots of guns. Not just a hunting rifle or two, or a single revolver kept in a locked drawer for personal safety. Military-style weapons. Dozens of them. But we know these things already, and besides, we’ll just argue about it right? Someone’s going to tell me that the guns this man had were illegal, and that people will always find a way to get guns even if they are banned, which would result in the rest of us law-abiders becoming less safe.

I would argue back that yes, it’s possible that a few would still get their hands on weapons. But not as many. Certainly, none of us expect a complete elimination of gun violence. But we must work toward reducing it—it’s the only humane thing to do.

But anyway, I don’t want to enter that inherently lose-lose argument.

“So, it’s final, I’m not going to write about it,” I insisted to my muse as we finished our walk. “It doesn’t have to be me. And you know why?”

Because I can’t personally do anything about it.

Because I can’t add anything game-changing to the conversation.

Because I don’t think I can change minds or hearts.

The moment we let ourselves feel helpless, believing we can’t do anything or don’t have anything to offer, is the moment humanity loses and insanity wins.

So yes, I’m going to write about the mass shooting in Las Vegas.

Because it does have to be me.

And it does have to be you.

Turns out, I do have something to add.

And so do you.