The Ghost that Haunts me: How a Buddhist Faces PTSD. 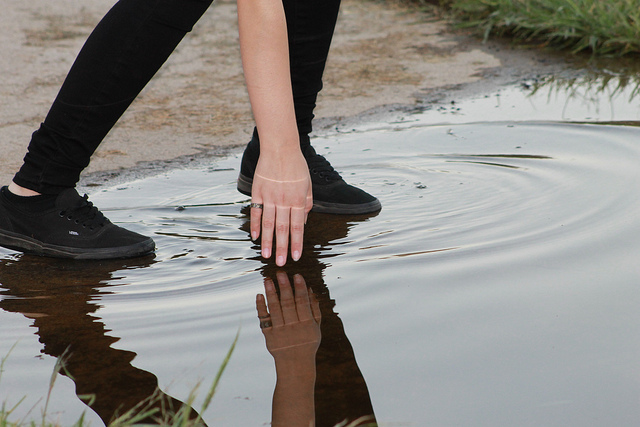 Yesterday, I felt like I was being haunted by a ghost.

This is not an experience I’ve enjoyed, nor is it easy to describe. Although many people go through trauma and have to live with it daily, we often don’t talk about it or the lasting imprint trauma can leave on our lives.

As common as it is (70 percent of adults in the United States have lived through a significant traumatic experience, according to PTSD United), the after-effect of trauma still always catches me off guard.

Although certain individuals are able to leave trauma behind immediately, others (like myself), continue to carry it—and the term for that (that we’ve become quite familiar with lately) is Post-Traumatic Stress Disorder (PTSD). It is something I have lived with, off and on, for much of my life.

Thinking I had healed from it, I was shocked this summer when an uncomfortable encounter brought back my past trauma. I was confronted again with the haunting ghost of PTSD, and I will admit—it was a challenging tete-a-tete.

To explain the experience of PTSD is difficult, but it can feel like being hollowed out from the inside—like an emptying of all internal contents and a severe black coldness that permeates throughout a blank, numb world. Other times it’s the opposite—it’s like the complete fullness of an experience swallows us.

Regardless of which side of the spectrum PTSD hits on, the noise of past trauma relived can become very loud. When triggered, PTSD sounds like a background scream, a warning bell that won’t relinquish, a stop light that will not turn from red to green, a breath that can’t fully be taken in or released.

This is our system trying to say that we are not safe, when in reality, we are feeling stress over something we have already survived. That’s why I call PTSD the ghost that haunts me—it becomes a haunting relived over and over again.

The task of attempting normalcy while being side swiped by an overly aroused nervous system can feel impossible, but we must try. What also makes things difficult is others misunderstanding the effects of this syndrome. There is an assumption that trauma victims should “get over it.” However, those who have never experienced the effect of a traumatic event do not comprehend that “getting over it” can be impossible for quite a while.

Many hours of professional investigation and self-trial this summer (working with my own PTSD) led me to return to the support of my Buddhist background and meditation practice to settle it. What I’ve come to understand from my own experience is that this relived trauma wants us to believe we are not okay. Meditation, however, wants us to do the opposite. It asks us to sit, observe, and learn that what is happening in this moment is something we can handle.

I originally came upon the acronym PTSD when I worked for National Defence, and a colleague of mine came back from Afghanistan unable to cope with daily life.

At that time, it was something we would talk about it in whispers, as if PTSD was so dangerous and rare that we didn’t want to talk about it in case this increased our own chance of bringing it into our lives. To me, PTSD back then sounded like a very unfortunate virus. I had no idea that it was something I carried inside myself, or that it’s twice as common for women to have PTSD than men. At that point in my life, the flashbacks and triggers I felt were something I denied, although they were regular occurrences.

Now I’ve learned more about the after effects of trauma and why certain people tend to relive it over and over again—and I understand and have deep respect for survivors (of all kinds). One of the most famous books written about trauma is Trauma and Recovery: The Aftermath of Violence, by Judith Herman. She describes that the result of sexual, domestic, and political abuse on the nervous system are almost precisely the same.

I learned this first-hand recently. I was walking with a veteran friend, and he was describing the after effects from his time in active service—and I knew precisely the experience he was describing, because I’ve lived it too. I did not go to war, however, I did experience abuse—and my nervous system responded to things the same way this veteran’s did.

It touches me deeply to understand how many people suffer silently with this haunting ghost. The “me too” movement has made this even more apparent recently.

What has helped me through my re-triggering this time is learning the ability to stay grounded—and also to become present while moving (an acutely aroused system can require movement to settle, rather then stillness).

There’s no one way or “best way” to work with PTSD, but coupling meditation practice with this one other technique helped me get out of my haunting this summer—a game called 54321. It begins by naming five things we see, four things we feel (the ground beneath our feet, the rise and fall of our chest), three things we hear, two things we smell, and one thing that we appreciate right now—I did this several times a day for a few months.

The premise of this game is to bring us into the moment, similar to meditation. In meditation, we become aware of the present time and space, and we try to not get hooked by the stories of the mind.

What I have learned with trauma is that the ghost of it wants us to believe that we are still in it. So, we must claim that we are not defined by the horrific events of the past. We must learn that we are good, and well, and safe—having survived that old experience already.

Those of us who know PTSD can learn that we are not victims forever, but that we are champions of trauma and bravehearted beings who deserve to feel present and safe today. It’s our right to be here fully, no matter what we have been through. It’s my hope that we each get to cultivate the practice of becoming present and know healing each and every day.

PTSD: How it Feels & How We Heal. ~ Betsy Greer

“Get Over It”: How Long it takes to Heal from Trauma & What Helps.