How Skateboarding saved my Yoga Practice. 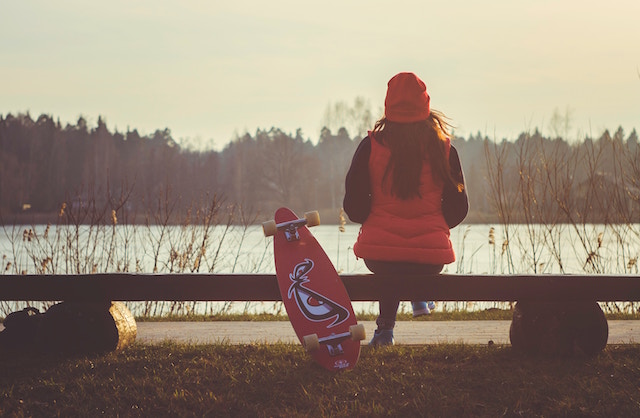 The commitment we make to our yoga practice sometimes feels like it has the same ups and downs as our personal relationships.

We get tempted to leave it, we flirt with Nia or have a short fling with Zumba. But we always come back to our faithful companion: yoga.

There is also often a tendency to drift away or disconnect from it when tragedy or a personal crisis hits.

At least, that is what happened to me when both my parents passed away suddenly and a house fire separated me from my son for several months. Life as I knew it fell apart, as did my 20-year yoga practice. Anxiety and fear took over and brought along their gang of conspirators: self-doubt and lethargy.

I had shared everything I was going through with a good friend of mine who had always been active in BMX cycling and skateboarding. I almost laughed out loud when he suggested I should give skateboarding a try. I was a yogi, and to me, skateboarding was the antithesis of yoga. I had heard him say things like “ flying” and “hammering you in the moment” when he described his skateboard sessions. The vibe, the culture, everything about it seemed brash and testosterone-fueled. In my mind, there was nothing spiritual about it.

And there was one other small detail: I was a 50-year old single mother.

But I couldn’t stop thinking about our conversation and couldn’t deny that something inside had lit up. I felt almost giddy about the idea of trying something completely different.

As if threatened by my excitement and renewed energy, my anxiety and fear heightened. Skateboarding? What, do you want to break your neck?”

It’s so easy to succumb to this negative talk when we are in pain and feel defeated. But I finally got fed up with hearing myself recite the same excuses and the destructive babble.

Falling off a skateboard seemed like a good alternative to living in a self-imposed prison of imagined fears.

Next thing I knew, I was enrolled in a group lesson at the local indoor skateboard park.

I showed up for my first lesson, all decked out in my new helmet and protective gear. I was immediately transported back to my first yoga class when the poses felt like a warped version of Twister and I could barely hold a downward dog. By the end of class, I was humbled, to say the least, but I was hooked.

As I wobbled awkwardly alongside a group of elementary school kids, all effortlessly nailing turns and gliding down ramps, I was definitely humbled. And by the end, I was hooked.

To my surprise, the bursts of energy and cat-like reflexes needed for skateboarding compliment the sinewy stretching and steady strength cultivated in yoga. Like opposites attracting, there is a push and pull balance between the two. A Yin and Yang. A bam and om.

The coordination required to stay on a skateboard makes my utthitta hasta padangusthasana a cinch. Pumping in a skatepark bowl strengthens my quads for a deeper utkatasana. Tumbling off my skateboard is now natural and expected, giving me the confidence to take inversion postures like the vrischikasana and handstand to the next level.

Do not judge me by my successes, judge me by how many times I fell down and got back up again. ~ Nelson Mandela

And this is what falling has taught me about life:

>> We can find spirituality amidst chaos: The music is deafening, and skateboarders whizzing by, startling. But despite the sensory overload, beneath the surface, skaters are connected to their mind, body, board, earth, and air. This connection is where our peace resides. In skateboarding, getting up from a fall is the reset: the new beginning and the lesson.

>> We are good enough just the way we are: Like yoga, skateboarding is what we bring to each session. There are no expectations, demands, or judgments, and our performance is neither a step backward or forward. We all equal and we all fall.

>> We can never fall too many times, in skateboarding and in our daily lives. A skateboard fall is the yoga equivalent of falling out of an inversion. Rather than seeing it as a failure, we can think of it the gift of getting that much closer to achieving what we want.

>> Blessings happen in their own time. You may fall one time or 100 times before you master a trick. And it’s usually when you stop expecting it to happen, that it comes. But you won’t ever get there without falling. 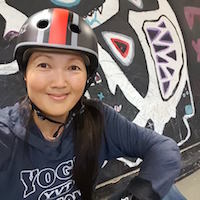